Giveaway *(you) set me on fire* by Mariko Tamaki

(you) set me on fire by Mariko Tamaki


Mariko Tamaki’s earlier graphic novel, Skim, (about an adolescent girl struggling with her sexuality) was beautifully written and handled with honesty and sensitivity. Her new novel, (you) set me on fire, has a lot of the same insight. 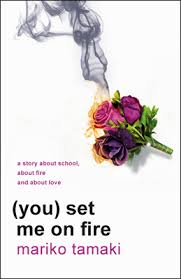 Allison Lee is seventeen and starting college in the fall. She’s had a rough senior year in high school: she’s set herself on fire twice (accidentally) and been in love once, and the wounds are still fresh. College, she imagines, is the perfect setting to start again. And things seem to be going along as planned until Allison meets a rebellious girl named Shar and her world goes dramarama.

You’ve probably heard people say that life after high school is really just a rehash of the same old dramas. Or maybe it’s more accurate to say that high school social structure is a super-concentrated slice of life. However you look at it, it’s fair to say that the teenage years are a goldmine of dramatic possibility for novelists, and Mariko Tamaki takes advantage of this in the best way possible. (you) set me on fire is reminiscent of the John Green at his best.

-Erica
Posted by Words Worth Blogs! at 5:10 AM No comments: