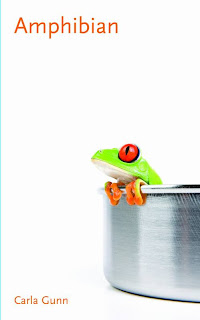 Though published as a novel for an adult market, Amphibian has total teen appeal. Not just because Phineas is nine and he’s dealing with some very nine-year-old issues like bullying, his parents’ divorce and his grandfather’s death. Amphibian is a teen pick because it speaks about that horrible anxiety of being a certain age where you feel out of control, not able to make a difference in the world around you but accutely aware of the problems that need attention.

Phineas is a really awesome kid and I loved just getting familiar with his voice for the first 30 pages. He’s an animal nut; knows everything about obscure animals and their habits, and he cares DEEPLY about their conservation. That’s why it slowly tears him apart when his teacher announces that she bought a White’s tree frog for a class pet. Phin sees this frog’s new habit as it is: a prison. And he plans on busting him out.

Amphibian was a tough read. You really had to tough out all of the facts about animal cruelty that Phin is worried about. Carla addresses animal rights activism in a balanced way, leaving room for the reader to make up their own minds instead of gunning them down in righteous indignation. Kind of a hard feat considering the stereotypes of animal rights activists and “tree huggers” (also addressed well in the book). And Phin’s voice and thought-process is perfectly crafted. This is a hilarious book as well as an emotional one.

My only qualm is the tidy clean-up at the end on the topic of bullying. I won’t give anything away but I wish it had been left unanswered as it often is in life. But this is a good book and just pulling off such a strong, established, memorable character such as Phin should win this woman an award of some kind. It certainly has won her much deserved critical praise.

I would definately give this book to a 12 year-old. There is mention of the F word in places, but it is used in a way that is necessary to the characters. Phin and his mom even discuss the uses of the word and its power. I loved Phin for the way his mind worked. I even started to think like him; linear but with an unerring compassion. It will be awhile before he is out of my head.

Another truly memorable character's voice:
How I Live Now, by Meg Rosoff
Posted by Words Worth Blogs! at 7:19 PM

Mandy, I just read this in one evening -- I couldn't put it down. What a great voice this character has! As the parent of a "gifted" child it really rang true to me, as did his mother's frustration with his endless questions and worry. I love the way the story resolved, although the bully story was not as neatly handled as it could have been. But to go from feeling powerless and out of control and unheard to what he achieves in the end is really, really great.