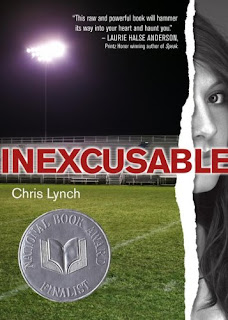 I was toodling around my goodreads.com account and came across this review:

Holy crap, I was really impressed with this book.
I felt that I had been led astray initially by the book jacket blurb, which suggested it might be like Invisible by Pete Hautman, also a completely unreliable narrator. But I found Inexcusable somewhat of a psychological horror. It felt scary to be so close to Keir's voice and not know what you will be forced to witness. So, great job by Chris Lynch for technique. Also, creepy open-eye-kissing scene. Fantastic and horrible. Totally recommended.

I'm pretty sure I kept it brief because I wrote this out on an index card to attach to the cover of this book in the store. Something I love to do so great books like Inexcusable don't get lost in the publishing din. I think my review makes the book sound like a Stephen King novel, which isn't bad; there is just so much more to this story than the impending dread. It's not even a dread which can be pinpointed. It's like the feeling you get when someone is telling a story that you know is going to end very badly and you can see the signs but already know that the bad thing has happened and you can't stop it. Lots of slow-motion-arms-out-lunging-mouthing-"Nooooooo" while you read. And that's the impression that's stuck with me since I read this book last September. I really still do totally recommend it. Especially for male readers.

And it reminded me of a similar narrator in Pete Hautman's Invisible. Doug is completely unreliable as his own storyteller. You can see the cracks widen as you read and he slips up verbally or is too transparent even as he tries to unintentionally decieve you. He's just trying to maintain his integrity; how he sees himself. Which is very human. Doug's voice is the best part of the book, and the ending gave me chills. For that matter, Hautman's Sweet Blood remains one of my favourite stories of "vampires" as well as excellently portraying a teen with diabetes. It has a satisfying, more hopeful ending than Invisible.

Labels: For the Dudes, Reviews J-R