Once Upon a Saturday

What captures me when I see something on the shelf, what really gets its claws into me when I decide to read a particular book, is how it begins. And once I've finished a book, I often go back and re-read the beginning, which adds another layer to my experience of the story.
So this week, I will showcase for you the opening of How I Live Now by Meg Rosoff:
My name is Elizabeth but no one's ever called me that. My father took one look at me when I was born and must have thought I had the face of someone dignified and sad like an old-fashioned queen or a dead person, but what I turned out like is plain, not much there to notice. Even my life so far has been plain. More Daisy than Elizabeth from the word go.
But the summer I went to England to stay with my cousins everything changed. Part of that was because of the war, which supposedly changed lots of things, but I can't remember much about life before the war anyway so it doesn't count in my book, which this is.
Mostly everything changed because of Edmond. 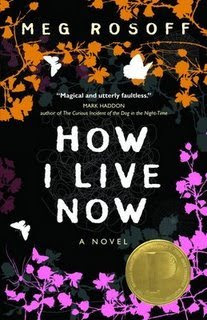 I'm currently reading her very newest book, The Bride's Farewell, and I was reminded how much I love HILN. If you haven't read this book I sincerely encourage you to pick it up.
New Yorker Daisy exiles herself to stay with estranged cousins (actually she's never met them) in the English countryside. Four precocious cousins and their mother live in a sprawling, charming old house, embedded in the lush natural landscape. Her Aunt Penn is busy in the city with some hazy government work and the 5 of them make due at home without any adult supervision, filling their days with farmwork, picnics and reading. Idyllic, until the war begins.
I was blown away by this story. I love that Rosoff had decided to set the events during an imagined war, one that feeds on confusion and seems to be a historical pastiche of conflicts during the last century. Rosoff is a master storyteller, an impeccable writer, and dammit, she made me weep. HILN proves the resonance of literature and its importance for the human heart.
And I want to give away an extra copy! Inside it has a signed bookplate by Meg Rosoff that she sent me. Just leave your name, comments, and your e-mail address and I'll chose a name randomly on August 22nd.
Mandy
Previously:
Interview with Meg Rosoff
Posted by Words Worth Blogs! at 12:43 PM

This one's on my TBR list and has been for ages. Perhaps if I had a copy in my hands I'd actually get to it? Although I feel bad because I haven't gotten to The Color of Earth yet...

Kiirstin: Well, I DO want How I Live Now to be in good hands so I'm glad you've been added to the draw!

just found your blog from a goodreads review - i will definitely be back! ;) i loved how i live now and am always recommending it (i'm a children's/ya librarian) - i would love a copy! and signed? sheesh!

I can't believe I haven't heard of this book before now. It's always nice to find recommendations of books others have enjoyed. I'd love a chance to win a copy!

Andrea and Cynthia: Thanks ladies, and consider yourselves in the draw.
However the book itself isn't signed, but a bookplate from Meg with a sticker back is signed and may be stuck inside the copy.
Actually she sent me a bunch of them, so if anyone wants one I do have extras.

I've heard of this a few times, but my local bookstore never has it in stock...

Hopefully I'll get lucky, because it sounds great!

Lea: I can't even describe how great this book is!

Looks like a good book. Thanks for the contest!

Awesome, count me in!

Oh, I'd like to enter this giveaway. This sounds great! I was about to pick up this title and buy it, but then I had changed my mind and brought home another one.

Thanks for hosting this giveaway. =)

I'd like to give this one a try- thanks for hosting!

Crappers I hope I'm not too late!