Once Upon a Time *Road to Bliss*

Road to Bliss by Joan Clark is a little lower on my to-be-read pile. Not for any reason against this book, actually it looks really good. I just have a lot to go through! I try to read the galleys that I receive just before their publishing date, so the review isn't months before it is available. But, I have too much going right now that I didn't get to Road to Bliss before its September publishing date. So, I at least wanted to read the first chapter, for my own curiosity.

From the ARC back jacket blurb:

Fifteen-year-old Jim Hobbs, alienated from life in Toronto, hitchhikes to the Prairies on a whim, where he finds shelter in an abandoned farmhouse. There, he encounters his neighbours, members of Majestic Farm, a group that abides by an old-fashioned, ultra-conservative set of rules enforced by their ruthless pastor. When Miriam, one of the pastor's daughters, secretly befriends Jim, they must hide their blossoming love for one another--or they will face terrifying consequences. 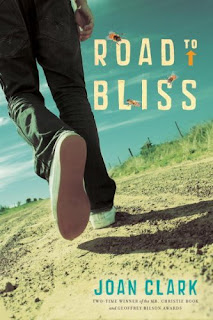 And here is how it begins:

Without his guitar, Jim Hobbs felt like the loneliest guy on the planet. Here he was on a sweltering August afternoon, parked on the running board of a transport truck waiting for the driver inside to wake up. Above him ABC Household Movers was printed on a shiny white door. Not a lick of shade anywhere, not a tree in sight, nothing to shield him from the sun smashing down. Though he'd taken off the woollen tuque he wore winter and summer, sweat dripped from his forehead onto the pavement, where it sizzled like drops of water in a frying pan before being sucked up by the sun.

Road to Bliss reminds me of The Chosen One by Carol Lynch Williams, which is about a young girl living in a fundamentalist compound with her family. The new preacher has a stricter rule in place and book-burnings and forced marriages between older men and much younger women are not uncommon. Kyra is in love with a boy her age and she sneaks away to read illicit books in the bookmobile that parks just outside the compound every week. The Chosen One was a really good book.

Also, there are no reviews for the book on goodreads.com yet. Joan Clark is better known for her adult fiction. Maybe because the book seems "literary" vs. genre her publisher hasn't put out the kind of teen marketing appeals that other books get. It makes me interested to read this book and find out.

Mandy
Posted by Words Worth Blogs! at 4:56 PM

Oh, I haven't touched my guitar in months! I bet my guitar feels lonely...