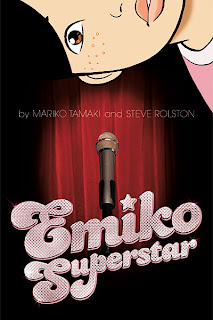 From Minx comics:
A borrowed diary, a double life and identity issues fuel a teenager's quest to find herself before she cracks and commits social suicide. Watch Emi go from dull, suburban babysitter to eclectic urban art star compliments of one crazy summer!
My Reading Experience:
Almost a year ago now the Minx comics line via DC Comics was cancelled. And it still bugs me. Seriously, I feel a little emotional about it. Not only did Minx eke out a stomping ground for girls within comics, both as readers and as writers and illustrators, it brought some great talent together. I mean, pairing Cecil Castellucci and Street Angel's Jim Rugg?? Truly awesome.
*rustling around Street Angel's website*
Awesome!! They still have this from a zine I put together a hundred years ago, on their website:
10/16/04 Femme INTERVIEW The first issue of Femme is now available. The contents include an article about the Golden Age of Wonder Woman, including an excerpt from an original Marston story from 1943, an interview with Trina Robbins, Lillian Robinson, Sawnie Burgos O'Brien from wonderland-site.com, Julie Doucet, Emily Blair from Soap Opera, and Brian Maruca and Jim Rugg from Street Angel. The zine also comes with three magnets: a Golden Age WW head, WW logo, and femme logo.
To get a copy, email: femmezine@hotmail.com (defunct).
And Emiko Superstar also pairs an awesome duo with Mariko Tamaki, of Skim fame, and Steve Rolston (Queen & Country, but also that little Degrassi: Extra Credit series, which I've actually read). The illustrations really did it for me in Emiko, they have a lot of life and great little details. Also a few cameos in the form of the Minx label as graffiti and one of Mariko sitting in a coffeeshop. Lovely things to catch while you're reading.
And the story is unique. It's definately a fish-out-of-water tale. But it's self imposed. One day at the mall Emiko meets Poppy, a performance artist, distributing flyers while making a public spectacle. The flyers advertise for a place hosting The Freakshow, called The Factory. Emiko thinks that if amazing people like Poppy are part of this Freakshow then she'd like to check it out.
Babysitter and good girl by day, Emiko re-invents herself into an artist, with inspiration from her everyday life. Until The Freakshow begins to crack around the edges and too much light gets in.
I wanted to cheer for Emiko as she found her passion and her art. She's such a wallflower to begin with but hasn't been inspired to be anything else. The group of people she starts hanging out with are well written and realistic. And I like that there are adult themes in the story; this isn't just about a girl finding a part of herself. The Curator, a much older man in charge of The Freakshow's management, is a creep. I've met people like him and he's so well used in this story. He's a good counterpart to the follow your passion and the rest will flow theme in Emiko Superstar.
I actually haven't read all of the Minx titles yet, but I'd love to continue collecting and reading them. There is a lot of care put into these titles especially written for girls. 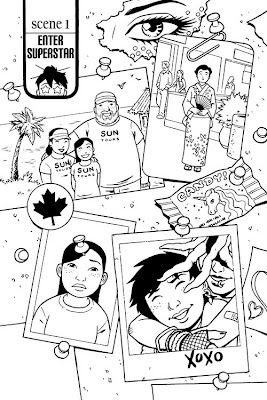 I also recommend:
The Plain Janes by Cecil Castellucci and Jim Rugg

Mandy, I thought I had linked your blog to my RSS reader and that you hadn't posted in a while. Now I see I have a bunch of posts to catch up on!

Mariko came to Eden Mills last year and she was just fabulous. I'll have to check this out.

Clare: It's funny because Dave mentioned today that you were in the store and I said to him something like "I wonder if Clare still likes our blogs" because I hadn't heard from you! :) Obviously not that it's your job to post comments and such! :)
Mariko does seem like a cool lady. I'm hoping to get an interview with her for the blog soon. So stay tuned.