Yesterday I received a copy of Going Bovine, Libba Bray's newest (thank you!). It looks very different from her Gemma Doyle trilogy. It also looks hilarious and like the funnest book I could be reading!

Can Cameron find what he’s looking for?
All 16-year-old Cameron wants is to get through high school—and life in general—with a minimum of effort. It’s not a lot to ask. But that’s before he’s given some bad news: he’s sick and he’s going to die. Which totally sucks. Hope arrives in the winged form of Dulcie, a loopy punk angel/possible hallucination with a bad sugar habit. She tells Cam there is a cure—if he’s willing to go in search of it. With the help of a death-obsessed, video-gaming dwarf and a yard gnome, Cam sets off on the mother of all road trips through a twisted America into the heart of what matters most. 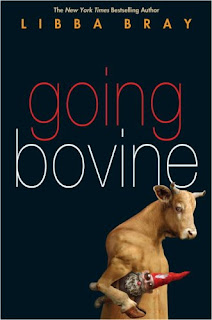 And the teaser. This week I have chosen TWO. Just cuz. Well, just funny cuz. This is from Libba's three page acknowledgments:

I would like to thank everyone I've ever kissed or punched* {footnote} *For the record, the only person I have ever punched was my older brother, Stuart. And he had it coming. No one should get to wear the Batman cape all the time. The word is "share". I'm just saying.

And from the text proper:

{About the Small World Disney ride when he was five}
I don't know exactly how I made the connection, but right around Iceland, apparently, I got the idea that this was the afterlife. Sure, I had heatstroke and had eaten enough sugar to induce coma, but really, it makes sense in a weird way. It's dark. It's creepy. And suddenly, everybody's getting along a little too well, singing the same song.

I have only had time to peruse the story, and fully read the acknowledgments (I love seeing which writers are BFFs. Also, her shoutouts are hilarious). But I'm actually very pumped to read Going Bovine. I read recently on Libba's livejournal that she was wandering around in a cow costume to promote her book and I have searched desperately for a picture, just for YOU guys! But there are none, and I think Libba is behind that. However, please be content with this hilarious worth-your-seven-minutes-or-at-least-the-first-four video interview I took from Goodreads:

Mandy
Teaser Tuesday is a weekly meme hosted by Should Be Reading!
Posted by Words Worth Blogs! at 4:25 AM

This cover is intriguing.

Mine is from Jo Graham's Black Ships this week - a really excellent book. Here it is.

Now I want to read that book even more! I need to get it for a friend. She collects gnomes and will love there is one on the cover.

I am hooked. This is what teaser's are all about!

Awesome. You guys are all awesome! Thanks for the visit! I'm going to check out all of your links and blogs.

That sounds like it's going to be hilarious! I am definitely intrigued.

My teaser is here.

Ahahha! Love both of those teasers! And the second one - I can TOTALLY identify with that. Small World is a creepy, creepy experience. Great choices!

You can check out mine here.

I have my teaser up here.