This week's Teaser Tuesday for me is Half World by Hiromi Goto, featuring illustrations by Jillian Tamaki.

I first viewed Tamaki's beautiful illustrations in the graphic novel Skim, written by Mariko Tamaki (absolutely recommended, even if you've just decided to read one graphic novel this year). I was given an advanced reading copy of Half World and I regret to say that it did not include Tamaki's illustrations! It is sad because in some cases the illustrations explain pictorally what is said within the text, for example the heroine Melanie looks down at a fortune cookie that has fallen from the sky and the text does not tell you that "Go Home" is her fortune, it is left to the picture to convey this. Also, later on there is a similar narrative jump with a magic eight ball's portent. So I missed out on this reading the ARC. But, I DO have the published hardcover in front of me now and here is your teaser: 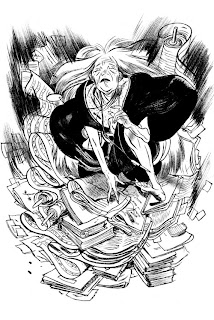 "Of course I have her," the creepy voice replied conversationally, as if he had heard her thoughts. "Let me call her over." His voice dropped conspiratorially. "She hasn't been herself. Not that she was ever much to begin with. But if she was always half of what she was, maybe now she's a quarter."

I physically shivered when I read this part. The speaker is Mr. Glueskin and he has trapped Melanie's mother in Half World as a way of luring Melanie in; they are speaking over the phone which Melanie thought was disconnected. So far the book is deliciously creepy and so so unique. I want to save it all up for a proper review to come! But I have found an illustration of a denizen of Half World which I've posted here.

Ooooohhhh - that looks SO GOOD! You can check out mine here.

Susan: Half World IS really good so far! Thanks for stopping by.

You can check out mine here.

Celi.a: I will check it out, thanks.