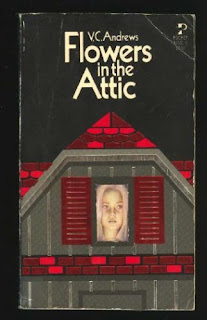 I never read V.C. Andrews not because I wouldn't have loved it, I just didn't even register it on my teen radar. Which is funny because I LOVED Stephen King and Anne Rice for years. No one that I knew was reading Andrews's books and I don't remember them being prominent at the library. It was only when I began working at a used bookstore that I was all like, "who is this person who has an entire shelf to herself and some truly awesome die-cut covers?". I didn't read them then, either.

It wasn't until yesterday night, reading Sara Gran's story about V.C. Andrews in the new Believer magazine, that I developed an insatiable urge to read VCA. Or at least Flowers in the Attic. Incest? Check! Creepy grandparents? Check! Vengeance and retribution? Check!
From Sara's article:
Ultimately, Andrews's novels constitute their own genre, in which secrets, lies, desire, and moral corruption all stem from--and are contained in--the family. In her world, parents starve their children, sister and brother become husband and wife, and grandparents punish grandchildren for being "devil's s 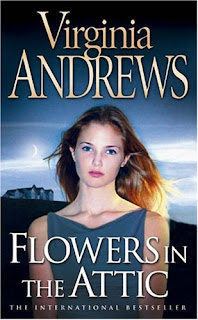 pawn". No one is to be trusted, and few adults are who they claim to be. Most significantly, there are no happy endings. For all their teen-girl fantasy elements, the books are also gritty, raw, and extremely dirty. There is little cynical or formulaic about them. If anything, they are too raw, too revealing of the author's own obsessions--which, as we'll see, might be exactly why no one ever talks about them.
But the part in the article that swayed me was mention of an interview with Andrews (only a handful of people have interviewed the author), where her books are likened to fairy-tales, with their sometimes gruesome origins. Andrews comments, "I didn't want a real horror, like a rapist or a murderer, but I wanted a fairy-tale horror". Which made me think that reading some of her books might not be so bad.
Sara's article starts to get away from the actual books and gets into our own teen desires and sexual abuse in and the decay of the American family in the 70's and 80's. But she gives a good re-capping of Andrews's six books (the only ones she wrote herself). Andrew Neiderman, author of The Devil's Advocate, ghost-wrote the remaining books in the series. V.C. Andrews died in 1986 of breast cancer, and a cursory internet search shows that girls are still pretty crazy for her books.
Mandy
This year is the 30th anniversary of the publication of Flowers in the Attic. Read the first page of the Believer article here.
Also, check out the repackaging of Flowers by "Virginia Andrews", pictured above. Her name is actually Cleo Virginia Andrews, but her publisher thought V.C. sounded more masculine than C.V.
Posted by Words Worth Blogs! at 5:13 AM

You know, come to think of it, I've never read this either.

Wow, bad call on the redesigned cover! The die-cut covers were such a defining element of these books. I never read them either, but I definitely knew of them, and part of the reason was that original cover. The new one doesn't seem to convey any of what it sounds like goes on in the story. The old version was perfect. A little creepy. You get that trapped feeling from it. You know something fishy is going on.

The new one just looks like any other book.

I'm sure the new one will equal an increase in sales in the current market though...

I love how over-the-top V.C. Andrews novels are!!

Juju: We should start a "haven't read V.C.Andrews before" book club :) Actually, I probably WILL read Flowers in the Attic, only if I can find the right used copy, that is.

Jon: Totally. The new design just looks like how they design YA books now. They are trying to get away from everything that made the books attractive in the first place. Although I appreciate that they have tried to "open up" the book; the cover is ambiguous and VC's name has changed. *shrug* I still want the die-cut cover for myself.

Marie: Really? That sounds awesome! The article in the Believer was so serious and academic at times. It was hard to see if there would be humour.

Wow, brings back memories and totally reveals how "old" I am! I loved this book...it was different from anything else I had ever read at the time. I do NOT love the re-designed cover, and I must be honest...this was the first in a series, and by the 3rd and 4th books the storyline because just plain icky and wrong. Read the first book, you will enjoy it. :-)

It was very interesting for me to read the article. Thanx for it. I like such topics and everything connected to them. I would like to read more on that blog soon.