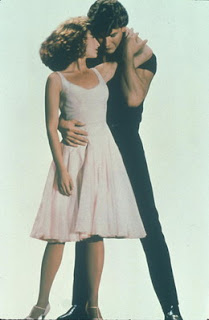 I don't want to flood my blog with non-book related articles, but Patrick Swayze's death is something I felt inspired to write about.
I actually watched Dirty Dancing last night, and loved it for the millionth time. It is kind of the perfect coming-of-age movie. I don't know if it holds up for a new audience, but it totally worked for me when I was younger.
It wasn't even that Patrick Swayze was hot in the movie, he was just a great guy. Watching it again I noticed that Johnny and Baby had some heat between them but they also had this strong best friend vibe that makes me happy to see; a first boyfriend/love should be a best friend feeling too.
Although I admit to dating a boy once who had a Swayze-shaped mouth, so I guess he affected me more than I think.
There are total cheesy moments in the movie, too, obviously being a product of its time; air guitar? C'mon Swayzzz. But the sets, the music, costumes, the chemistry between Johnny and Baby, the easy way you could empathize with Baby's role in the family, make it quintessential for teen girls (and boys, if they want; my boyfriend recently watched it for the first time and as a grown-up and really liked it).

So here's a little tribute:

It's so crazy to me.
I was in love with him growing up.
I had a poster of him on my closet door that I stared at as I went to sleep every night.
One summer my cousin and I watched the movie every single day until we memorized all the words.
My heart goes out to his wife and I have resolved to always remember him as he looked on my Dirty Dancing poster back in 1988. http://biturl.cc/BJB

Juju: That is the BEST poster to grow up staring at! Ha, thanks for sending along the visual. I want to blow it up and put it on my wall now!
Even now, if I'm alone, I will get up and dance to the songs real loud. There is something about this movie!
Your comment made my day!