I mentioned in a previous post that I will read anything that Barry Lyga pens, on principle, because of Boy Toy. I read it last year and was floored. 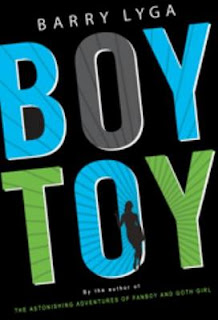 Bookshelves of Doom put me onto this one. I admit that the premise was enough to pique my interest, as well as BOD's fantastic review. The best thing a review can do is generate jazz to read a certain book. It has to REALLY make you need to know what this book is about.
Boy Toy is such a hard book to recommend to people. "Here, read this book about a 17 year-old boy thinking back to the time he had a sexual relationship with his adult teacher when he was 12. Oh, she's also out of prison after serving less than her sentence and still lives in his hometown...and everyone knew about the incident" *dismissing ushering motions* At times it's a hard story to handle.
When the story starts, Josh has been living in the same town, knowing that everyone sees him as "That Kid. The one from the papers"...Oh yeah, I forgot the very first page of Boy Toy. I'm flipping through the book now to reaquaint myself with it and the first page has this list: Ten Things I Learned at the Age of Twelve. Nine of these things are school-related, stuff like math and grammar, history facts, but the tenth thing is: 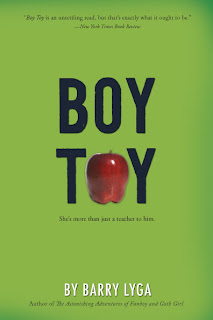 10. How to please a woman.
It creeped me out then and it still creeps me out now. So Josh is now 17, and he's in gym class. His Coach, a real jerk, is goading all the boys in that terrible Demean-You-To-Make-You-Men way, when he calls oout to Josh, saying Something that causes Josh to stop immediately and smash his face in with his fist. But you don't get to hear exactly what it is the Coach said. You'll read like a crazyperson to find out what caused Josh to react this way. And that pretty much sets up the story.

One of the coolest parts about this book is that Josh doesn't see himself as a victim. As he's remembering the past in pieces while debating if he'll try and contact his old teacher in the present, he actually thinks that the feelings they had for each other were real. He's trying to recapture that time, when he was twelve, to understand it. When I say it's cool, I mean that the moral questionsing, the human reactions of the victim in a circumstance like this, are deep and relentless (stealing word from Kiirstin). And incredibly surprising. The ending is what floored me the most.
Here's a bit to give you an idea of Josh's mindset at the beginning of the book, just as he's heard that his teacher is out of prison:
Here's what amuses me about the whole "predator" angle: Predation is a part of the natural world order. You don't get pissed at a lion for eating a gazelle; that's just what lions do. They prey. So by calling Eve a "sexual predator", aren't we saying that she's doing something that's part of the natural order? It isn't that we have to like it, any more than we have to like the idea of some poor eland bleeding to death on the veldt. But it's nature.
I have learned an enormous amount in the past five years.
There's also this side story involving a girl that Josh used to be friends with before he couldn't relate to girls at all. The whole book is about coming into a clear understanding of the past and where Josh might go from here.
Powerful stuff.
I'm gearing up to read Goth Girl Rising which releases in October. It is the sequel to The Astonishing Adventures of Fan Boy and Goth Girl, also by Barry Lyga.
Mandy
Posted by Words Worth Blogs! at 9:14 AM

I've been waffling on whether or not to read this book for a while. It's the same kind of thing...premise sounds so...out there...but will Lyga pull it off, and is this going to be trite or whatnot? But thanks to your post, it's on my library reserve list. Great review!

great review! i like the storyline. I chech this one out

Celi.a: I think it's worth the read. I had the same reservations at first, although Bookshelves of Doom had such a great review and she's really spot-on with her tastes. I trust her opinion.

Faye: Hey, thanks! Thanks for the visit!

I was on the fence about reading this one. One of my teens came book in the other day and said it rocked her socks off. But man, oh man, the subject matter...

Gotta put it on the hold list now though.

I may just have to try this book! I had heard of it before, but I never knew what it was about..it sounds creepy and disturbing but I liked your review! added to my TBR list!