From the back of the north american version:

Georgia Nicolson's life is far from simple. Her cat, Angus, is the size of a small Laborador. Her three-year-old sister may have peed somewhere in her room. And her best friend, Jas, thinks she looks like an alien just because she accidentally shaved off her eyebrows. Enter the S 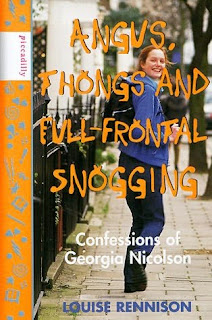 ex God. This just might turn out to be the most fabbity fab year ever!

I've just finished reading this one and it's alright. It's completely hilarious in parts, in many parts actually, but it also has very little heart. Possibly this develops in the later books. The very little part would be Georgia's charming love for her three year old sister and for Angus, her feral cat (who is pretty awesome in the book). My overall impression of the book is that it reads like a long comedy sketch, is completely character-driven (which is always fine), but the story is shaky. It wraps up way too abruptly and I kind of didn't care about the romance between Georgia and Robbie. It had no tension and I just kind of felt bad for his ex-girlfriend. It reads like a grocery list of funny happenings.

But I enjoyed it for that. Sometimes I would go for pages where I wasn't laughing or engaged in the story but then there are these great hilarious parts that made me feel the read was worth it. Diary of a Wimpy Kid by Jeff Kinney is also a hilarious coming-of-age story but it has more heart and the reader feels engaged with all the characters and situations. I didn't feel that I could cheer for Georgia.

People should definately read this book, though. Many MANY readers love it, it has won a ton of awards and honorable mentions (including being a Michael Printz Honor book and winning a Smarties Award), it's hilarious and you can read it in a day. Also, Paramount released a movie version available only in the U.K., it's called Angus, Thongs and Perfect Snogging, and combines the first two books. Apparently it's very different from the books, tonally, and the younger audience didn't like it.

I said, "She's got an en suite bathroom--that's very bad feng shui."
Jas said, "Why?" and I said, "I don't know but it's very bad, you'd have to have about fifty goldfish to make it OK again...

Libby decided that "knickers on" was a game, and I chased her around for ages before I could get hold of her. Then when I was putting her knick-knacks on she was stroking my hair, going, "prrr prr. Nice pussycat. Do you want some milk, tosser?" I think she thinks "tosser" is like a name.

Angus, Thongs and Full-Frontal Snogging, Louise Rennison, Harper Teen, Harper Collins Publishers, this edition has extras inside like an interview with Louise Rennison, Georgia's qualities of an ace gang, and the first few pages of her second book. The picture above is the british first edition cover.

Read my Teaser Tuesday of Angus, Thongs and Full-Frontal Snogging.
Posted by Words Worth Blogs! at 4:22 AM

I'm afraid you may have lost me with the description on your Teaser Tuesday post comparing Georgia to Bridget Jones, whom I find to be completely insufferable. This happened to me with Susan Juby's Alice, I Think as well and I'm not sure I can bring myself to repeat the experience... which sounds, actually, quite similar to yours with this book. Although I did think that Alice, I Think had heart. It just also had too much Bridget Jones-like behaviour for my taste.

It does sound funny, I just wish book blurbs would stop comparing characters to Bridget Jones so I could decide for myself who they remind me of, rather than getting Jones stuck in my head.

I really want to read this and see the movie.
Superb review!

Kiirstin: *librarian/bookseller shake*
Yes, you're right about the endless comparisons with Bridget Jones. That was an excerpt from Goodreads.com (I think), but anywhere I read a discription it mentioned Bridget. But you really have to love the voice if you're going to get into a book and Georgia's voice didn't really do it for me. Alice, I Think is on my TBR list, but I'll put it off if it's like Angus...
I just wanted it to be funny but also have a story.

Juju: Yeah, actually the movie looks kind of okay. I was going to insert a trailer for it in my blog post but don't want to hamper my blog with too many trailers non-book related. But it came up eaasily on YouTube. The girl they cast as Georgia actually seemed well cast. Let me know if you ever see the movie or what you think of the book.

*jumps up and down in excitement* ;)

I wouldn't discount Alice, I Think completely -- it does have a story, and I think if the story was what you were missing, you will probably enjoy Alice. Although it doesn't have as clear a plot as a lot of other things I've read, there's definitely a story arc. And it ends perfectly -- that was one of the things I really enjoyed about it. Endings are hard, but Juby nailed that one.

This book always gets great reviews from the teen girls that come into the public library where I work. Personally, I like "Mates, Dates and Inflatable Bras" better than this series.

While I'm all for laugh-aloud books, I'm afraid I don't think I'll ever read this. It's the title. Can't get past it. I don't do gross-out humor, and while this may not have any in it at all (not that you mention, anyway), I'm just...repelled by the title. Does that make sense? No. It happens sometimes with bad cover art, too...I know I'm a snob! Great review, though!