I found this one on my shelves at work. I'm thinking of reading it next. The cover captured me and the font along the spine. The cover image of the roped hands is repeated on the spine and on the back. It looks 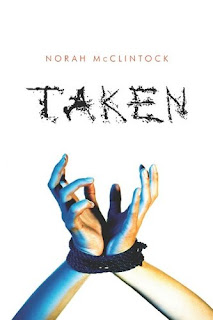 a little like Living Dead Girl by Elizabeth Scott, the story of a girl who'd been abducted by a man when she was ten and was still with him at fifteen. It was a difficult, dark story, a little too short, but a good read.

Taken is published by Orca, and I've never read anything by the author. It also just came out for an early October release...Oh *researching* Norah McClintock wrote Dooley Takes The Fall. Of course, that's where I've heard the name. I haven't read that book either but I remember a lot of buzz about it on the blogs a few months back.
As the cover and title suggest, there's an abductor on the lose and Stephanie is taken after hearing about two other girls who have gone missing. Somehow she manages to escape her captor and run into the middle of the woods. She must survive the elements and keep running from this insane person, she's also haunted by what happened to the other girls who've been captured.
It looks like a powerful read. Here's a little teaser:
I was in some kind of a cabin. It was small and grimy. The wood floor was bare and cold. So were the walls. They hadn't been painted. The only thing on them was a calendar hanging on a nail. It was from a hardware store. The edges were curled. It was ten years out of date.
Whose cabin was this? Where was it? What was I doing here?
And why couldn't I move?
Because I was tied up.
Chilling. Looks good.
Mandy
Teaser Tuesday is a weekly meme hosted by Should Be Reading.
Posted by Words Worth Blogs! at 7:06 AM

Sounds good but too heart wrenching for me.

Juju: yeah, Living Dead Girl was pretty heart-wrenching. Taken looks more like it will be about this girl survivng the forest rather than scenes with her living with her abductor. Still dark.

Gripping teaser. I will be adding this to my TBR list. My teaser is here: http://rundpinne.blogspot.com/2009/09/puzzle-king-teaser-tuesdays.html

You're right about chilling. Also, menacing, scary, creepy, and it might give me nightmares. All the same, it's a great teaser!

You can check mine out here.

I'm intrigued, how did she get there and does she get away?

Wow! The cover is teaser enough, so the actual teaser is just icing on the cake, so to speak. Off to find a copy...

My Teaser is HERE

McClintock was one of the finalists for the Forest of Reading awards this year. I was there, I should remember whether she won -- but I can't. I do remember that her signing lineup (where I was doing crowd control) was almost as long as Melanie Watt's, which was crazy.

McClintock is *very* popular with a lot of our library patrons, though, and she's also very prolific. I've not read anything by her, yet, but I'm going to have to.