Interview with *Robin Brande* and a Special Book Giveaway!

With my funner blog entries sometimes I just don't even know how to start writing! I'm just sitting here, thinking excitedly, like you would hear a little contented whirring noise if you leaned in close to my head. 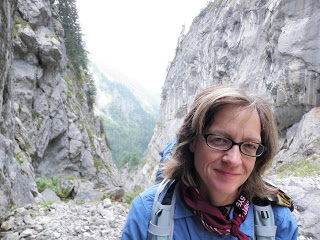 Robin Brande has written two very cool books, Evolution, Me and Other Freaks of Nature, and most recently, Fat Cat. In my review for Fat Cat, I mentioned that Evolution... had me consumed by reading fever from the first chapter. Ditto, Fat Cat.
So I was beside myself when Robin agreed to be interviewed for Edge of Seventeen. Especially when her responses were so funny and insightful. And, AND!, Robin has offered a wonderful chance to win a copy of her book, Fat Cat, SIGNED, to a lucky winner! I am truly jealous of this last part!

*****
Did you "method write" to create the right experiences for Cat in your book? Did you become that naked Neanderthal woman? 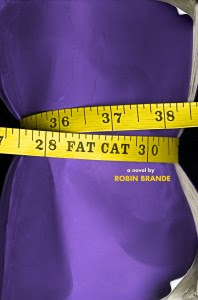 I’ve always loved the method writing aspect of my work. I love to put on my character’s life and wear her around for a while. So yes, I absolutely did everything Cat does in the book—which led to some hugely-positive (and several unexpected) changes in my life. I gave up all processed food. I went back to cooking. I tried to give up as much technology as I could while still writing a book!
As for Cat’s ultimate choices about what foods to eat, I had no idea that’s where the book would go. But the more research I did into food and health and the modern chain of food supply, the more I realized that both Cat and I would have to come to the same scientific conclusion about what was a healthy way to eat. So I’m grateful for Cat’s experiment, because I’ve continued to eat that way for the past year and a half, and I feel so much better than I ever have in my life. Although, confession: I have gone back to drinking coffee. Not too much, but just enough to make my little coffee taste buds happy.

At one point Cat is assessing her life so far and she realizes that she's been holding onto the same ways of thinking, even when they've hurt her. She mentions this great image of holding your thumb down on a bruise and that just letting go means you just remove your thumb. Can you tell me a little more 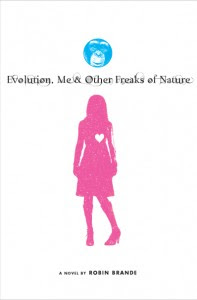 about Cat and the way she holds on to things that hurt her in the story, how she understands destructive patterns?

Sometimes it takes a radical, dramatic change in your habits to make you realize how asleep you’ve been—how you’ve just continued to do the same thing for years and years, even when it doesn’t serve you anymore—or worse, it actually harms you.
I think Cat had a lot of different issues to work through and finally let go of: her anger, her feelings of hurt and betrayal, her shame at feeling she didn’t look right, her personal health habits, her choice to lock herself away from everyone except her best friend and the best friend’s boyfriend. Sometimes we isolate ourselves out of fear that people will reject us or ridicule us or otherwise make us feel worse than we already do. Part of Cat’s transformation that I loved so much was seeing her open back up to the world. A big part of that was letting go of all of the hurt from her past.

Nick is my favourite character. He's a science nerd and a total recluse when he's in school but during the summer breaks he does well with the ladies. I loved his whole wooing Cat section in the book. How did you create his character? Is he currently single, can you hook me up? :)

Oh, my gosh, isn’t he hot? I’m glad you liked him, because I had SO MUCH fun writing that section of the book. He’s based in part on a couple of different guys I’ve known in my life, and I’m sort of wondering if any of them will read the book and think/know I’m talking about them. But part of Nick is also pure invention. I just loved the idea of having a guy be so smart, so disciplined, and so unexpectedly passionate that it would really throw someone like Cat off her game.

Do you have a background in any Sciences? Both your books have a strong emphasis on Science class for the main characters. Both girls figure out the world through research experiements. Did you have a special science teacher who inspired you?

I was completely anti-science when I was younger. Thought there was nothing more boring or difficult. I have no idea why, but I’ve become a late-blooming science geek. Now I watch all the science shows on PBS, I read science books for fun—and I’m currently doing the research for my next novel, which involves quantum physics and string theory. It will be a romantic comedy, of course. Because don’t we all like to get our science that way?

I am giving away a hardcover edition of Fat Cat to a lucky winner. Is there a "virtual inscription" that you would pass on? How would you ideally inscribe a copy of Fat Cat to a reader?

No need to be virtual. You pick the winner, and I’ll personally send him or her a signed copy.


To participate in this generous book giveaway offer, simply leave your name and e-mail address and consider yourself entered to win! I'll choose someone at random (using random.org) on October 27th.

Check out, also, Robin's official website and Blog (and check out some very exciting film news about Evolution, Me and Other Freaks of Nature!)

Mandy
Posted by Words Worth Blogs! at 9:10 AM

Please consider me entered for the draw! You already have my email.

I would absolutely love to be entered!

I read Evolution, Me and Other Freaks and it was very good! :) (oooh, movie news? msut check this out...)

thanks to you and Robin Brande for this awesome contest! ;)

My name is Tiff and email is lchslibrary@gmail.com :)

I've already read and loved Fat Cat, but had to comment on this awesome interview! Loved it! Great questions and great answers.

Robin tweeted a link to your blog so here I am. I love her books and would LOVE to have a signed one (If I don't win I may just have to track her down at a signing) so please count me in.

My email is packratx (at) hotmail (dot) com

And I hope you don't mind that I'm following you now...

PS: I'm actually giving away a signed book on my blog this week--sadly not one of Robin's--and while I feel tacky blurbing my own blog on yours, it seemed wrong not to mention it since I'm trying to win a book from you. (Everyone is voting for which one I'll be giving away so I can't say which one it will be. Right now ArchEnemy is winning.) Anyway, I hope that isn't rude to mention... Sorry if it is...

I'm so looking forward to this book and I'd love to enter your giveaway. Thanks!!

Thanks so much for the wonderful interview with Robin! I look forward to browsing some of your other reviews and interviews.

Great interview! I'd love to be entered for the book. Cat sounds like a character who learns some important lessons about herself. Thanks for sharing!

Enter me! I LOVED Robin Brand's Evolution book! Please enter me in the drawing!

I really need to check out both of Robin's books!

Loved the interview! I so want to read this book, pretty please enter me :)

Would love to win FAT CAT!!!

Love your blog by the way!!

This sounds brilliant. Even if I don't win a copy, I'll have a look for it at the library.

I think you've got my email ;)

I DO love my science romantically funny and I DO so like Robin...

Can you pop my name in the hat?
Liz@LizGartonScanlon.com

Sounds like a good book! Please enter me if this contest is international!

Would LOVE to win a signed Fat Cat!

I really hope I get it!

This looks so excellent. Thanks for running the contest and the interview.

Oh, I love Robin Brande's work - please enter me! My 7th graders would love to read this.

I'd love to enter!
Jen

I just read a review of this book on another blog. Sounds very interesting!

would love to enter!
marjoleinbookblog a gmail.com

would love to win!
-amy
addictedtobooks1993@yahoo.com

I am so excited to read this book!
-Sarah (tchschick@yahoo.com)

I've seen a lot of good reviews about this book! Count me in please =)

I've been hearing great things about this book! I hope I win, thanks!

please enter me in the contest/giveaway. Students in my library would love this!

Is this open internationally? If so, please enter me!

I keep forgetting to enter this!
Definitely enjoyed evolution, and this sounds even better. The idea is really appealing.

Please enter me too!

Excellent book! I had to read the library's copy, and would love to have my own.

No email address for public display, but you can reach me through my blog....

I would love to win this!

OOh I want I want

I was mesmerized by Evolution, Me, and Other Freaks of Nature. I can't wait to read this book by the same author!

Please count me in! It looks great--nice interview, I like that she went back to coffee, makes her very human!
JHolden955(at)gmail(dot)com

Great post, Robin is a lovely person and a good writer...

Oooh, just under the wire - I love Robin's books!

THANK YOU SO MUCH FOR YOUR ENTRIES! STAY TUNED FORMORE GIVEAWAYS.