I've Got Love for *Lauren Myracle*

The first book I read by Lauren Myracle was Kissing Kate. It's her first novel for teens and was an ALA Best Book when it came out. And it is good. Good enough to give me blanket interest in anything else Lauren writes--Lauren writes a grocery list? Pass it on. Can I Get it signed? 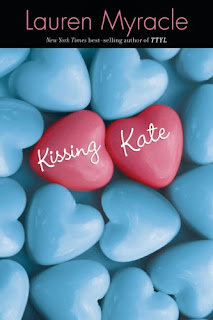 Kissing Kate was one of those quiet stories where you think maybe nothing is happening plot-wise until you reach the end and realize that the entire world has come down in slo-mo on Lissa's head and she's not exactly the same girl you started the book with. Lissa and Kate have been best friends 4-eva until Lissa kisses Kate at a party one night when everyone's boundaries are down. While Kate takes a few weeks away from Lissa, avoiding her, when Kate attempts to finally reach out to L, she is rebuked. Although Kate's form of reaching out is attempting to talk Lissa out of being a lesbian. Instead, Lissa meets Ariel, a girl who is vibrant and outspoken and just a little crazy, and Lissa finds a new way to see herself.
Kissing Kate could have easily fallen into the tone of an after-school special but remained afloat; one of my favourite teen books.
Then I read Rhymes With Witches because I loved the title and the cover-art. A very different book than Kissing Kate, RWW is a bit like Carrie and Mean Girls put together. 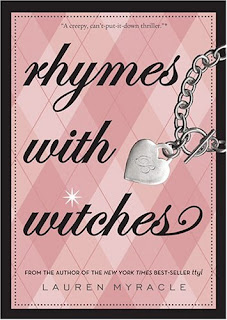 Jane is a freshamn and is practically invisible. Although still bullied by the most popular group of girls in school, the Bitches. One day Jane kind of snaps and decides that she wants to BE one of these girls. Maybe just to get an insight into how they see her. But she realizes that the sacrifices made to be a Bitch get to be too much, even for social-climber Jane. There is a paranormal aspect to the story although the tone is more a focus on popularity and what it takes to stay on top; popularity as a series of choices along the way. Anything paranormal is a bit like Buffy The Vampire Slayer; a bit of a metaphor for the real horrors of highschool.
And then I read Bliss because it's a bit of a prequel to RWW. You can definately read it as a stand alone, and I would recommend it over RWW, if you were stuck in a room on the set of Saw 32 and had to read only one book of two before a gruesome death and these were your only choices. Otherwise, read them both.

Bliss is probably more like Carrie that RWW. It's set in 1969 and the chapters ar 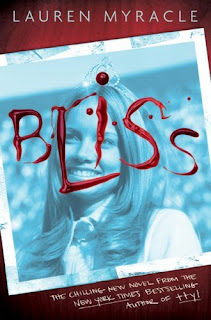 e interspersed with quotes from The Andy Griffith Show and news articles about the Charles Manson Family murders. The whole tone has this pitch-perfect eeriness. Bliss is dumped off on her affluent grandmother's porch after her hippie parents take off unfettered. She starts boarding school and is a total fish-out-of-water as she's only ever grown up in a commune making her own soap. Her need to make friends places her perfectly in the grasp of a schoolmate's dark obsession with a historic murder. Bliss is a bit of a psychic and her sensitivity is preyed upon by an incredibly unstable girl.
One thing that can be said about Lauren is that she's a good writer of
the highschool dynamic and it's potential to get very dark.

Mandy
Posted by Words Worth Blogs! at 6:58 PM

You know, I read How to Be Bad, which she co-wrote with E. Lockhart and Sarah Mlynowski.
And I really didn't love it. Or even really like it.
And then I read Let It Snow, in which her story was just mediocre.

I had sort-of written her off, but after reading this post, I'm feeling like I might should give some of her actual teen books a try before fully judging.

I'd only ever read her section of LET IT SNOW (which was okay) and then PEACE, LOVE & BABY DUCKS (which was awesome).

I'm also liking the clarification that, if I have to pick one of two books before dying in a disgusting way, then BLISS it is.

I really liked Kissing Kate and I have Bliss on my shelf but haven't gotten around to reading it. But I've enjoyed the stuff I have read that she's written, like How to Be Bad.

Hmm, thanks for the recommendations on other Myracle titles. I do want to try out Peace Love and Baby Ducks.