I love books by Sarah Dessen. I find her so addictive; you have to sit and sit and finish her books all at once. Here's a little Dessen inventory, personal to me:

The first book by her I read was Keeping the Moon. At the time I thought it was just fi 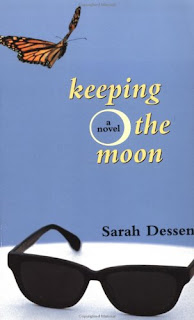 ne and didn't read anything by her for a while afterwards. I thought the story was a little hard to feel for. I wasn't connecting with the main character, it felt a little distant. But, I loved the setting--beach town, summer, fish-out-of-water teen girl working at a diner. It's all about who she meets, who she falls in love with, how her summer changes her from this weight-obsessed daughter of an aerobics guru to something a little more like herself.

Then I read Dreamland and had about the same reaction to it. It was just fine. A girl gets involved with a bad boy and he turns out to be a really terrible person. Not this bad boy with a heart of gold kind of guy, a vulnerable little boy with a prickly exterior, but a real jerk of a person who gets her into drugs and smacks her around sometimes. Oh, actually, I read Just Listen before I read Dreamland. Here's what I had to say about Dreamland last August:
I definately didn't enjoy this one as much as I enjoyed "Just Listen". When Rogerson starts abusing Caitlin I was surprised, not because I was so into Rogerson being a genuinely good guy, but because it didn't seem to fit. I don't think the turn into a survivor's story was written well enough to take me along with it. I also think this turn was taken too late into the story and then dealt with too quickly. I g 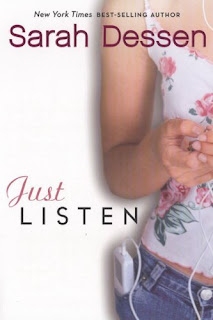 uess I have a pacing and tonal problem with the book. I will still read more Sarah Dessen.

And I did. As I realize now, I read Just Listen after Keeping the Moon and completely fell in love with Owen. He was this huge guy just out of anger-management counselling with a crazy taste in music but a sweetness to him that won me over. His leading lady was a former popular girl who was shunned out of her circle I think because there were rumors that she slept her best friend's boyfriend. The two spend their days together and Owen shows Annabel how to speak up for herself, especially about her sister who's bulemic and her mother who's a weird-o child-model fanatic, carting Annabel around for years to photo shoots she hated. Just Listen is my favourite Dessen title to date.
And Along for the Ride, I think , was a lighter story. It revisits the setting of Keeping the Moon and some of the secondary characters, but I can't remember the details exactly. The same diner is featured although this book takes place at a different time. But again, it's the story of this girl, a fish-out-of-wat 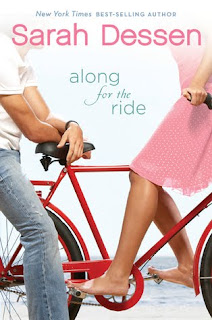 er, visiting her dad, his new wife and her new step-sister for the summer. She has no idea how to make friends or how to even be around people. She thinks she's cold like her mother, but she realizes that she has an inner feel-good girl and hunky Eli is happy to let that girl loose.
I have to say that I still don't love the cover for the book. The characters on the front look like grown-ups, especially the guy. The bike is all wrong; Eli is a talented bike trick/stunt guy like a skateboarder but with bikes *sorry, I have no idea about the language* so his bike does not look like this. The cover just looks kind of uncomfortable and a little plastic. I looked around to see if they've released cover art for the paperback edition and they haven't yet, but I DID find this amazing Livejournal dedicated to Sarah Dessen. This person has created a fantasy movie poster for Along for the Ride. And it's really cute.
Oh, and Lock and Key was really good too. It was about a girl and her mother living i 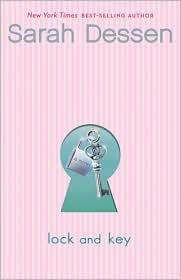 n poverty until her mom just stops coming home. Ruby, underage, tries to hide it for as long as she can but Social Services takes her to live with her sister, who she hasn't seen in 10 years. Her sister left her and her mother, went to school and now lives the ideal life; she's educated, lives in a beautiful home, she's married to a great man. Ruby doesn't know how she'll fit in because she's never lived like this. The book, really, is about Ruby getting to know her sister and her mother and her past a lot better. There is some love-interest in the book but the message is more like "Ruby has a lot of stuff going on in her life and can't really get her head around liking a boy, too". Nate is more like the nice guy next door, maybe potentially in the future a boyfriend.
What I love about Sarah's books is the transformation that happens to her characters. She often starts her books by pulling a girl out of her habitual way of life and plunking her down somewhere not quite her. Add some wacky cast and the result is an exploration into the way people around us change us, make us see things in different ways. Plus, when she's on, Sarah knows how to really write a leading guy.
Mandy
Posted by Words Worth Blogs! at 6:21 PM

Ah, see, this is very useful for me. I have yet to read any Sarah Dessen at all, but now I can figure out which to read first. Thanks Mandy!

I love this post! I love Sarah Dessen's writing and books, they are just amazing and make me happy to read them. Great job! :)

I think I read the Sarah Dessen books in the same order you did, and I had exactly the same reactions to them.
Except that I still haven't read Lock and Key. Guess I have to get around to that!
I loved this post!

Awesome! I'm glad you guys (yoose guys) liked this post! I was just feeling some Dessen love/nostalgia and wanted to share it.

You *need* to read "The Truth About Forever." It is my favorite Dessen book.

I really love the "movie" poster for "Along for the Ride" though. That is pretty awesome!