I'm not sure how to best start this review, but my very first reaction, even after reading the first PAGE of Pretty Dead, was "wow. Really? Wow".

Francesca Lia Block's writing astonished me. I was almost unprepared to read this book. I'm 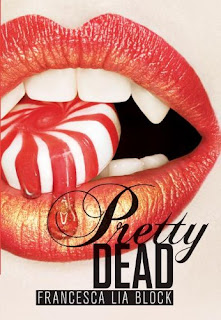 going to copy out the first paragraph because after I read it my mind shifted gears, knowing I was about to read something totally different:
Teenage girls are powerful creatures. I remember; I was once one of them. They are relentless and underutilized. They want what they want, and they will do what they must to get it. Love, possessions, beauty, food, sweets, friends. Unless they are crushed so hard as to give up. But then they are just as relentless, only seeking different things. Detruction, annihilation. Unless they can find a way to birth something beautiful out of themselves. In this way teenage girls and Night's children are not that much different, are we?
Pretty Dead is a book about vampires unlike any other teen vampire novel published now. It has a classic Anne Rice sensibility; old world vampires and the weight of the universe. But it's also about true love, it's magic, and centuries-old boredom, brother to destruction. Sadly, the cover is misleading. This story has real weight to it, and the cover is too light; it has this cute candy-sweetheart look, where the story has this deep passion and intensity. The story is also surprisingly erotic, definately for an older reader. It's a powerful read. 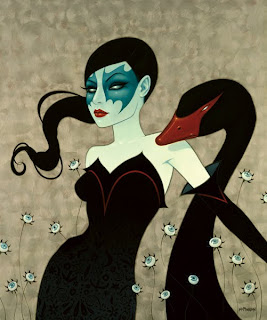 Pretty Dead is about an old beautiful, lonely, bored Vampire named Charlotte who goes to highschool on a lark and loves a girl named Emily because she is innocent and alive. They are best friends, although Charlotte is in love with Em's boyfriend Jared. Charlotte is also being stalked by her maker, an even older vampire named William, who seduced her after the death of her twin brother. When Emily dies and Jared can't cope, Jared and Charlotte find a mutual solace. And Char realizes that it will be the biggest transforming power in her whole unlife.
As for sexy and dangerous vampires, William is one of the best written fiends I've come across. The scenes in the book with him were my favourite, tantalizing and scary. I felt like Charlotte, overwhelmed and intrigued by this person who dressed like the Devil the first time they met at a Hallowe'en party. He is completely how he seems; destruction follows him through the many years Char is with him, until she realizes the true horror of living such a long life.
F. Block is an infinitley quotable book. You can open it at random and find a passage so sensual and alive that it will catch you off-guard. F. Block doesn't write so much as she crafts a living animal with her words. Very very powerful stuff. Here are a few lines in particular:
"That doesn't sound so bad in my opinion," she laughed. "I'd like to be immortal. In this house. With you. We could dance and dance and never stop."
I smelled the rich red wine of her blood again then. Like tiny grapes. Plums. Berries. A bit of cocoa. A hint of cinnamon. A tang of iron.
***

We were in Rome when we finally succumbed. I say "we" because it seems to me that it was something we did together in Rome in the dark. Something both of us wanted at that time. I had figured out what William was and I wanted to join him. How can you not succumb to such a desire in Rome, in the dark with a fountain spurting outside your window, the shadows long from the white moon?
I was like that moon to William's demon sun.
Pretty Dead was a quick read, more of a novella, but it packs a lot in. F. Block has a gritty urban magic-realism sensibilty which I think runs through most of her books, the Weetzie Bat books in particular. I don't know why it took me so long to actually read her stuff. The cover of Pretty Dead drew me in, although it sets a different tone than the actual story. I would have gone with cover art more like this Tara McPherson print, which is edgy-cute, dark and older than it seems (pictured above).
And because I loved this book so much, I want to give it away. So I'm hosting a Pretty Dead book giveaway. Just leave your name and e-mail address and consider yourself in this draw. My copy is not a galley, it is the real hardcover deal. How much do you want this book?
Giveaway ends October 18th.
Mandy
Posted by Words Worth Blogs! at 9:08 AM

Great review. I have been looking at the book for a while, but have not heard much about it. Thanks.

I would love to read this, please enter me.

Wow i love the cover of this book and Francesca Lia Block is an amazing author! One of my favorites!

I'd love to recieve this book!

OMG I want this book!! You did a great review and it makes me want it even more!

Count me in please!

This is a really cool review, and I want this book simply because I am sick to death of "tortured" vampires/etc creatures of the night that aren't very dark or complex at all.

I just finished this one last week and I agree -- the cover is so appealing and yet misleading. But I'm glad I own my own copy of it. I know I'll be reading it again.

I did start reading one of her books and I agree, her writing is amazing!

I was considering buying this book, and your review was the compelte opposite of what I thought the book would be, considering the cover. Great quotes there! You really made me want to read it, so please enter me. (:

I want this book like WHOA. The cover is super-pretty, but I've been hearing rumblings for a while about the amazingness that is the story inside. Please enter me for your giveaway!

So the cover makes me absolutely want to eat a peppermint. The first paragraph and your review make me want to go out and buy a copy right now and not wait for the possibility of winning it.
Enter me anyway, though! I will learn this art of patience. :-)

Fantastic writing.
No need to enter me in the contest (I'd like to try this one from the library first) but you've definitely peeked my interest.
:)

Thanks Mandy.
Have I told you lately you rock?

I've seen the cover for this book a few times, but it's your review that has made me want to read it now! I'd love to be entered, please :)

Fab review! I definitely want to read Pretty Dead, I love the cover!

I would love to win this book! Thanks for the chance!

I LOVE Francesca Lia Block! I've only had a chance to read her teen books so if I won this, I'd be so happy! ;)

I've heard awesome things about this. Count me in, please! :)

Wow, I've seen this book around, but I've never read anything about it - and obviously didn't pay enough attention to even know it was about vampires! It sounds mega interesting, compared to some of the vamp novels out now! Awesome contest!

I love all of Block's books... they are just so beautifully written!

I really want to read this one. I have heard so many great things about it.

What a great review, I actually was not considering this book too much until I read your review and now all I know is that I really want to read Pretty Dead!! :)

Oooh, OOOH, OOOOOOOOH, I want this book so, so, so, so bad! I absolutely love the cover and everything! Great review too.

Amazing review! I've never actually read anything by FLB but this sounds like it would totally rock my world!

I've never read anything by this author but this book sounds really good.

I hadn't heard of this book, but after reading your review, I'm adding it to my WL! Please enter me!

I want this book more than chocolate! lol and I LOVE chocolate.

I have been wanting to read this book FOREVER. I love, love vampires and this cover alone is worth swooning over. Thanks for a fantastic post and enter me please :)

I posted about this at: http://butterflybookreviews.blogspot.com/2009/06/book-contests.html

Have been seeing this book everywhere and heard that it's a must-have! great review!

I'm eager to read this book. Please enter me!!

I've only read one book by Block and I'd love to try more.
Jen
jpetroroy (at) gmail (dot) com

This is one of the best reviews I have read today. Great job, really got me excited over this book. So i want to win it. I am your 90th follower - I love even numbers. Story Siren sent me over.

Sound amazing, count me in =)

wow this books sounds awesome, a real page turner, and i would love to read it!
thanks for the giveaway

Oh my gosh! I want this book so bad. I found you through YA connection through The Story Siren and am glad I looked. Kinda like fate... hehe

I'm always looking for new authors in this genre to read! tWarner419@aol.com

This book looks like an interesting read. Please count me in.

would love to enter, thanks
marjoleinbookblog a gmail dot com

you make me want to read it now!
-amy
addictedtobooks1993@yahoo.com

This sounds like an awesome book! I can’t believe I’ve never heard of it before, it totally sounds like the type of book I’d worship.

Thanks for this chance to win this amazing book I have looked at it for some time now and really do want to read it so I hope I'm Lucky!!

I'd love to win this!
booksobsession(at)gmail(dot)com

WOW. You're review just makes me want to read Pretty Dead all the more!! I hope I win:)

Re-posted your contest at: http://contests-freebies.blogspot.com/2009/10/pretty-dead-giveaway.html

Absolutely LOVE the cover and her first book is one of my favorites! I'd Love a chance to read this one! Thanks for the opportunity!

Your review totally made me want to read this! I'm not into the whole vampire thing, especially since the whole Twilight craze. I'm about over it. But this sounds very good!

Here's the link to the winner's announcement and comments!!