Genesis by Bernard Beckett is one of my favourite books I've recently read, let alone one of my favourite SciFi/Dystopian picks. Awhile ago, after reading it, I wrote a sub-par review and mean to go back one day and write a review that does this book justice.

This book has one of the biggest mysteries that I've enjoyed reading as it played out. The setting threw me off; a walled island, an Examination, and the plot happens in 5 hours. Genesis is a strange and satisfying novel and I need you to just go and read this book! I picked it up without any background information and was floored.

And I still wondered about the setting, how exactly had Bernard crafted it and does he consider it dystopian? Enjoy this guest blog post! 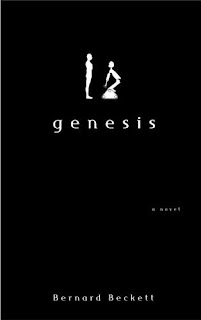 ***
Genesis isn't a dystopian novel in the sense that I set out wanting to write about some dysfunctional future world. Rather the future world emerged as the necessary support for another story that I'd always intended to have sit at the heart of the novel, that of the relationship between a prisoner and a robot.

I first played around with this idea in a theatrical form, writing a play set in a prison cell, with a violent and dangerous prisoner left alone save for the company of a conniving and compelling AI life form, who was shackled to the wall. Although the play worked well enough, and allowed me to explore the ideas at the heart of Genesis, in particular the implications of accepting consciousness to be a purely physical phenomenon, I didn't know how to make the leap from here to a story that would fit within a novel's structure.

I knew I needed the story to be set in a future society, so as to make the development of AI plausible, and at first I had a more phi tech scenario, the Adam figure was a teenager, sitting an exam by way of a thought-processing helmet, set in a huge hall along with thousands of other candidates. Adam flips out and goes on a murderous rampage and so is imprisoned and so meets his fate with Adam, the AI robot.

The problem with this backdrop was that the world needed too much constructing, and shifted the balance away from where the heart of the story sat for me, the confrontation between man and robot. I kept wanting to get to the play more quickly. That led to a couple of years of forgetting about the story altogether, until the dystopian version that eventually made it into print suggested itself to me. The conceit of having Anaximander telling the story from an unspecified point in the future by way of an oral exam allowed me to very quickly summarise the break down of the world that led to Adam's imprisonment.

I then found myself in a how to get here from there scenario, and really just free-formed the early conflict stuff, China vs US, resource shortages, global warming, germ warfare, neither likely nor inconceivable, it felt about right for this brand of speculative fiction. I'd also been looking at a little bit of classical Greek history at the time and was taken by the story potential of the whole Sparta thing, and indeed some of the ideas in Plato's Republic. As is often the case in writing, as I constructed the world it just felt sort of right so I went with it. But al the time my eyes were firmly on the prize, the prison cell with Adam and Art, the point of the novel.

Interestingly, readers tend to be split on whether they focus most on the dystopian build-up or the consciousness/machine debate. I know where my own fascination sits, but in the same respect it's sort of cool to think the set-up is tight enough to provide its own set of distractions and questions. I think perhaps the main thing with dystopian novels is they sit as some sort of a warning about the future, or indeed the present, and I didn't set out to do that. Much more I set out to prompt the reader to examine the assumptions upon which their own sense of humanity are built.
--Bernard
Once I realized there are so many cover differences for this book, I just had to include all of them here. Actually I think there are more editions out there: 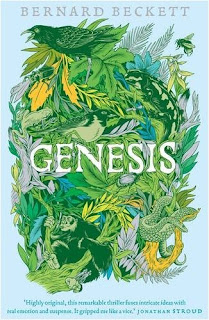 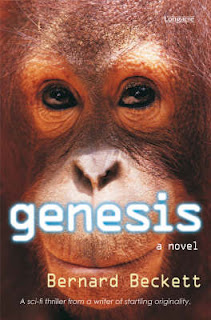 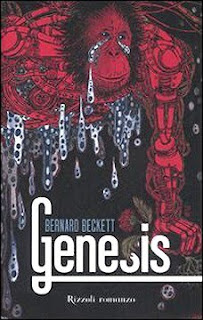 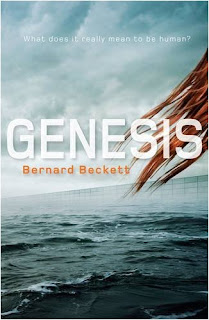 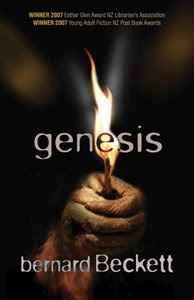 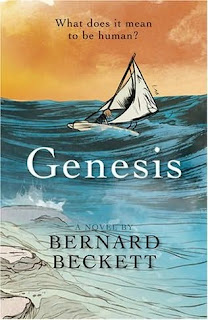 I would also like to send an apology out to Bernard for not posting this during my dystopian week, last week. Bernard was the first author to get back to me about being involved in Dystopian Teen Week and I truly love what he's written here. Thanks again, Bernard.

I haven't read this yet, but I'm going to keep it in mind.

Maria & ParaJunkee: Thanks for the visit! I think you'd enjoy Genesis.

Also I just want people to know that when I delete comments it's because they are SPAM; ads and stuff randomly left I delete. So I'm not deleting what people have to say! I just notice that I'm getting more SPAM recently! I had to actually delete a full prior blog post because it seemed to attract too much SPAM.

These guests posts are fantastic! I've been wanting to read Genesis for a long time.

Thanks Heather! Let me know what you think if you DO read it!

Fab review. I really liked this one. Thank you for showing me all the different covers. I can't decide which I like best?

Most common adverse effects include: - Nausea - Headaches - stomach aches - flushing - dizziness - constipation - joint or muscle pain - dry mouth - increased blood pressure levels, so it is essential for a patient to be monitored when using this drug.

It is the individuals own responsibility to eventually find the root causes of their thought patterns which is causing them the anxiety.
[url=http://www.thedrunkgeek.com/]order valium[/url]
Valium comes in pill form is either to be taken at a set time daily, or an the onset of anxiety in the individual.
http://www.thedrunkgeek.com/ - cheap diazepam
They are in nearly every town.