A Special Guest Review by Kate from The Neverending Shelf!

I haven't had a chance to read Skin Hunger by Kathleen Duey and I was going to add it to my list of dystopian teen books to read for this week. Until Kate from The Neverending Shelf generously offered to review this book for Edge of Seventeen! I love her blog. Recently she had a little make-over and the art is fantastic. Go over and have a look-see.


Thank you, Kate, for this great review! I think I'll bump Skin Hunger up my to-be-read list pronto! 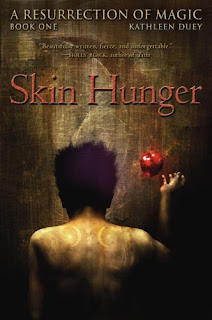 Description from GoodReads:
Sadima lives in a world where magic has been banned, leaving poor villagers prey to fakes and charlatans. A "magician" stole her family's few valuables and left Sadima's mother to die on the day Sadima was born. But vestiges of magic are hidden in old rhymes and hearth tales and in people like Sadima, who conceals her silent communication with animals for fear of rejection and ridicule. When rumors of her gift reach Somiss, a young nobleman obsessed with restoring magic, he sends Franklin, his lifelong servant, to find her. Sadima's joy at sharing her secret becomes love for the man she shares it with. But Franklin's irrevocable bond to the brilliant and dangerous Somiss traps her, too, and she faces a heartbreaking decision.
Centuries later magic has been restored, but it is available only to the wealthy and is strictly controlled by wizards within a sequestered academy of magic. Hahp, the expendable second son of a rich merchant, is forced into the academy and finds himself paired with Gerrard, a peasant boy inexplicably admitted with nine sons of privilege and wealth. Only one of the ten students will graduate -- and the first academic requirement is survival.
Sadima's and Hahp's worlds are separated by generations, but their lives are connected in surprising and powerful ways in this brilliant first book of Kathleen Duey's dark, complex, and completely compelling trilogy.

Skin Hunger, the first novel in the A Resurrection of Magic trilogy, starts this interesting series off with a bang. This vivid and gritty novel grabs the readers attention from page 1 and does not let go. Told in alternative chapter narration, the reader is dives head first into two different characters (male and female) lives that are connected by a small thread. While I originally did not understand the connection, it does become clearer as the book goes on.

What really surprised me about this novel was that Duey does not hold anything back. It is one of the grittiest novels I have ever read. I cannot help but love and respect any author that is willing to not sugarcoat death, hunger, etc. Therefore, instead of shying away from such serious issues, she embraces their existence in this beautifully created novel. While this is a dark book, it is also one of survival. The strong and complex characters that Duey has created are among of the best I have ever met. They continuously rise to the meet their challenges, and become better because of it. I cannot wait to see how this complex novel continues in her next novel, Sacred Scars. I know that if it is anything like Skin Hunger, I will be very pleased.


Kate also has a review for other dystopian books like:


Life As We Knew It by Susan Beth Pfeffer
Unwind by Neal Shusterman (one of my faves!)
The Adoration of Jenna Fox by Mary E. Pearson
Posted by Words Worth Blogs! at 9:23 AM

I picked up SKIN HUNGER last week for the YA Dystopian Book Challenge... I'm even more excited to read it after Kate's review!