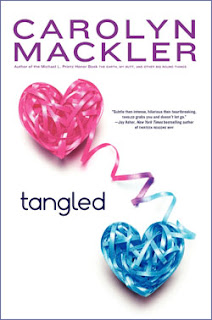 Tangled kind of opens twice; first in a short paragraph first chapter, and the second time in a more engaging way:

It was a typical Wednesday evening in Topeka, New York. Spring break was coming up next week, so I had nine minutes of homework, which I did while IMing my best friends, Ellie and Leora, surfing for celebrity gossip, and sending a virtual plate of snickerdoodles to my brother's ReaLife page. Then, since I happened to be on ReaLife, I checked out Samir Basu's online profile. And then, since I have no self-control, I opened every photo on his page and drooled waterfalls over his caramel cheekbones and milk-chocolate eyes. I lust after Samir and, yes, have even fantasized about how we'll gloriously merge cultures (me: Jewish, him: Indian) for our wedding ceremony. Never mind the trivial fact that when I pass Samir at school he rarely waves at me.

What a good start. I loved Jena's voice, the whole snickerdoodle thing, and it gave me a sense of her life as being pretty normal. Uneventful, but normal. I could relate and I was hooked; I wanted to know where Jena was going, wanted to her more of her voice. Which I got, at least for the next 80 pages.

In Tangled, Carolyn chooses to take four characters--Jena, Skye (kind of like Kelly from Bev Hills, a hopeful teen actress), Dakota (who I think of as the guy from Inexcusable by Chris Lynch, an entitled jock), and Owen (Dakota's nerd brother, blogging addict)--and tell their stories. But each at a time, first person narrative, for about 80 pages or so. All of the characters play a role in the four stories, and all have their genesis in Paradise, the Caribbean resort where they meet. The resort plays a small role and most of the narratives take place after their vacation--where they went for all different reasons.

I should mention that I just don't like this set up--in any novel. For me, it kicks me out of the story. I wanted to know more about Jena's point of view, I connected with her in a way that I was unable to for the other characters, and when I saw her again nearer the end her transformation didn't feel as immediate to me because her story was being told through Owen. This is absolutely my own thing. The only realy problem I had with Tangled is that I wanted more of Jena. What the structure did do for the book is that the writing is very tight. It is crisp and clear, there is a reason for all the parts. It's very obvious when a book is sloshy (Breaking Dawn, I'm looking at you).

So the story begins with Jena, who is travelling with her mom, her mom's best friend, and her daughter Skye, to the Caribbean for Spring break. Skye and Jena are always left together, although they are hardly friends. Jena is a good person so she looks up to Skye and even reports back to her best friends about the movies that Skye has been auditioning for. Skye is prickly and superior and at the same time she can't stand to be herself. One night, after Jena has been bemoaning her lack of experience with guys, she meets Dakota, a hunky jock, who seems to be interested. They meet one night in the Jacuzzi, when Jena finds a suicide note left by the tub.

The suicide notes don't turn into this bad after school special in the story, much to my relief. I found this plot was left in the background and used really more as a catalyst to introduce Jena and Dakota. When Jena's story segment wraps up, we've been introduced to all four characters and the next section is for Dakota to tell his story. And then Skye.

I was less interested in Dakota and Skye as characters. They were the jerks of the novel, if you love Jena like I do, Dakota even more so. I did mention that he's like the guy from Inexcusable *shiver*. But both characters redeem themselves in their own ways. Which I think is the point of using first person narrative for their stories; you have to get into the bad guy's mind to see where they're coming from, why they do the things they do. And why they should be forgiven. Neither D nor S are the person that Jena is, but both end up showing their own brand of heart that adds another dimension to their character. Also, Dakota was written very well. He was such a $*&% that I actually had this prolonged recoil experience while reading his story. Carolyn was able to flip from a sweet girl perspective to someone like Dakota. She's an insightful author and I appreciated this while reading. Even as I wanted to kick Dakota.

Oh, and I loved Jena's Everything book. Here's a great passage:

I'm obsessed with quotes. You name the person--Albert Einstein (smart), Toni Morrison (very smart), Nicholas Sparks (pure genius)--and I've got one of their sayings. My everything book is a regular blank journal I bought last year. The cover is that famous black-and-white photo of the couple kissing outside Hotel de Ville in Paris. I once googled the image and was crushed to learn that not only was the kiss staged using models, but the woman later sued the photographer for damages. I did my best to block those facts out.

I love it. Nicholas Sparks is "pure genius" and Einstein is just "smart". It's so Jena. And so is her romaticism about love and life. When we see her again in Owen's story, she's become her own woman and I wish I could have read about her path to get there. She holds on to her sense of romance and is rewarded by the end.

On Carolyn's website there's a great Q&A about the book. Here are some of my favourite parts:

Which of the four narrators in Tangled is most like you?

Some days I’d say Jena, other days I’d say Owen. I suppose I’m more of the observer type than the life of the party. Then again, of all the stories, I loved writing Dakota’s the most. I have such a tender spot for him and his struggles. And for Skye as well. There are bits of me in all four of them. I have to have that in order to relate to a character.

While writing Tangled, how did you get into the head of a teenage boy?

It was definitely an interesting challenge. Owen was easier…but Dakota! How was I, a non-wrestler, non-jock, going to write about Dakota? I knew him and so capturing his voice and his feelings weren’t hard. But how could I do the sports stuff? Early into the first draft of Tangled, I was speaking at a school in suburban Chicago and I mentioned my dilemma to a crowd of juniors and seniors. Afterward, I was approached by a senior guy, Tom, who said he was a wrestler and would be happy to help. We exchanged information and set up a phone call. He definitely wasn’t Dakota – he was very sweet and humble – but he was a trove of information about wrestling, working out, guys’ feelings about their biceps. Tom even helped me choreograph Dakota’s fight with Timon outside the auditorium!

It's funny, when I was reading I was like "How does she know what guys feel about their biceps?" It's cool to see some of the origin for Dakota's voice.

After finishing Tangled I spotted her other book Vegan Virgin Valentine in a used bookstore, which I'm now eager to read.

Tangled by Carolyn Mackler is released today! Carolyn is also the author of the Michael L. Printz Honor Book The Earth, My Butt, and Other Big Round Things.

This book has gotten so much hype, and I am way too eager to read this. It added on to my need for Tangled. Agh! The suspense is killing meeee.

Wow, I *must* get this one. I'm pretty obsessed with quotes too.