Reviewing *The Secret Ministry of Frost* by Nick Lake

Holy Crow man, where have you been all my life. How does a book like The Secret Ministry of Frost hang out in the world, unread by me? 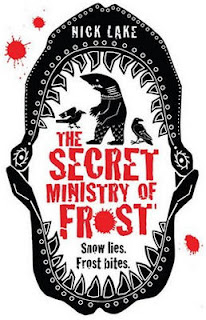 I'm not sure I'll actually send off this insightful fanmail missive, but I was so surprised by how good SMF was. I have pages of notes here that I took while reading, so I'll whittle them down as best I can.

The cover suggests that this book is for those 11 and up, but I say there should be a heavier emphasis on the "and up" part. SMF is dark and sophisticated, gruesome at times. Light lives in an old house by a forest in Ireland with Butler, while her father explores and documents the Arctic. He keeps a blog for Light and a journal, but when the book opens, Light is preparing for his funeral, in abstentia. He father is lost in the Arctic and presumed dead.

Two things caught my attention at the start of the story. One is the pneumatic tube messaging system set up in her house, built by an ancestor. How cool is that? And another is this passage, where Light reflects at her father's funeral:

Light, overwhelmed by the drama of the scene, thought that it might break through the barriers she had erected in her mind, causing her sadness to come flooding out and drown her mind.

Looking back it doesn't seem like such a telling sentence, but when I read it I knew that Nick Lake had an insight into the psychological aspect of his characters. The basic energy in the mind that can be witnessed. Here is an author describing a characters subjectivity; what's happening in their mind, not just how they feel. I'm not sure I'm explaining myself properly here, but Nick does this over again through the book. One of my favourites is when he write 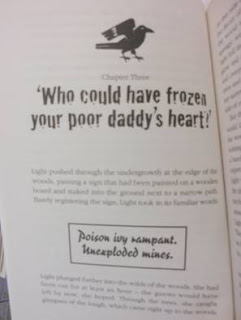 s in a dying character processing his own dying. You stay in the head of this secondary character and view his death as something meaningful, rather than just seeing his death through Light's eyes. It's really well done, and felt uniquely written. It lends a pathos to the scene that felt fresh.

And Nick writes a truly horrifying bad guy. Here is an initial description of Frost:

Tupilak ignored her. "Something bad is at work in the Arctic--a monster. This monster has been spoken of for many years. Many centuries. But even Setna [Inuit goddess of the sea] has never seen him. He is called Angutagiuppiniq."
Light processed the parts of the Inuktitut word. "Snow...man?" she ventured.
"Frost," said Butler, "That's what the English-speaking Inuit call him." He shuddered involuntarily. "But most avoid mentioning his name. He does not appear in any of the Inuit tales, for fear that invoking him might attract his attention. He is..." Butler searched for the words. "He is worse than a monster. He is the cold. And he is Death. To meet him is to be lost. This is why none can say what he looks like."

Spooky business. And Frost is so scary when you do meet him. I ac 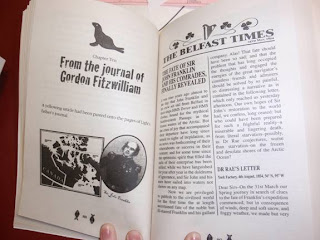 tually didn't know if Light was going to make it. Even though I assumed she would because this is a book for younger readers and Light is a protagonist.

And although SMF can be dark and gruesome, there is some fine humour. Like when the British Navy pulls up (by this time Light and her troupe are in the Arctic) and when the Captain sees Tupilak, who has a shark's head (it's a thing), this is his response:

The British submarine captain took a step forwards..."His head..." the man said, looking slightly confused. "It looks...well, like a shark."
"Of course not," said Butler. "He is only a little out of proportion."
The captain nodded sagely. "A little out of proportion. Yes. Best not to mention it, really. Might make him uncomfortable. I was brought up better than that."

So funny. And Butler is totally crush-worthy. He has his own mysterious past, and is very loyal to Light.

I also loved how the setting was evoked. Light describes the Arctic as fairy tale beautiful, but when she's lost in the tundra looking for her father's research station, she describes it perfectly as a psychological desert; a tabula rasa that rips you out of context. Which fits the tone of the story as well. It's beautiful and fairy tale-like, and it's jarring and seemingly hopeless at times. And action-packed. The last hundred pages was kind of non-stop action. I remember Light actually rolling into an attack at one point, like James Bond. Or a ninja.

My one qualm was the ending. Not the whole ending, mind you. Nick decided to leave a big piece of the end action unsaid and as a reader I found that slightly frustrating. And that's it--that's my only qualm. Oh, and that it ended at all, of course :) (that's always my favourite thing to read in a book review under the "cons" field).

I feel like I haven't done this book justice with my review. SMF is more suited for a book club discussion because there is so much involved. Actually, if anyone has read it, let me know. I'd love to discuss it further.

Mandy
Posted by Words Worth Blogs! at 9:07 AM

You are SO thorough! Great!

What...what genre is this? Probably I'm being stupid and I should just go back and read your review again...only I don't want to spoil the story. But I still don't have any idea...

It does sound great, though. The words 'gruesome' and 'fairy' in the same review always get me. Plus, awesome cover art!

:) It is a hard one to peg. I guess fantasy would be its big umbrella, but it's not exactly. Magic realism fits. With a bit of horror adventure. "Horror adventure?"...read it, it fits!! :)

Ooooh, ooooh, ooooh! This sounds so good. Would maybe not have picked it up on my own, but... yes. Yes I will.

Ohhhhh I'm liking the quotes a lot! The writing looks great, will check this book out.