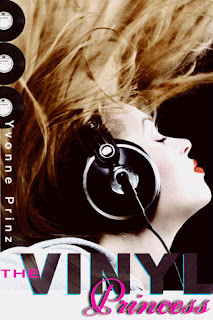 Where can I even begin? I really loved The Vinyl Princess and am caught off guard by how good it turned out. Something happens when you realize just how awesome a book is, while you're reading it, where you slow down and really process what's happening on the page.

The Vinyl Princess, or "Veep" as she'll eventually be called, is a music junkie. She's on her summer vacation, working at Bob & Bob's Record Store in Berkeley, California. She blogs about music and makes zines, and she has a huge crush on "M", the man of mystery who frequents Bob's. Is he the secret commenter on her blog?

And that's the premise in a nutshell. But thinking the book is no more than its basic plot would be like saying Gilmore Girls is only about a mom and her daughter living in a small town. And TVP is very much like Gilmore Girls, much to my huge excitement. Like GG, TVP is way heartwarming. I LOVE Allie and how she moves through her world. I love the attention to wacky details in the people who haunt Bob's. I spent a few years working in a used bookstore downtown and Yvonne NAILS what it's like; the misfit "customers", the strange requests, sometimes surreal situations. Okay, like for example, here is a description of a few of Bob's "regulars":

Shorty and Jam are a good example of the type of street people who spend most of their time on the avenue. Their behaviour ranges from harmless to annoying to extremely cantankerous. These two are unusual even for Telegraph Avenue, because in addition to abusing drugs and alcohol, they also dabble in cross-dressing; they like to wear women's clothing. Not generally a whole outfit; usually just a flourish here and there. Like today, for instance, Jam is wearing a pale pink polyester blouse with a ruffle down the front and Shorty is carrying a beaded handbag.

I actually KNEW someone like this when I was working at the bookstore! "Just a flourish here and there", completely. My guy was also a punner.

The sense of setting in Veep, too, is unforgettable. Because Yvonne has a connection to Amoeba Music in California (she is a co-founder), I googled the main location and even checked it out with Google Street View, because I am addicted to Google Street View but also because I wanted to see Telegraph Street. Veep is fiction but I could get a very strong feel for the place which must have given Yvonne a lot of her inspiration for the true feel of working in a record store.
Also, as shown above, The Vinyl Princess is hilarious...Ugh, I wanted to type here a description that was really good and of course I forgot to actually write down the page number. It was a reference to Allie talking about the differences between spider types. One type of spider is the kind that looks like it's doing push-ups when you go to touch it. I laughed out loud at this, with this funny snort, when I read it. Another great situation is when Allie is meeting her mother's new boyfriend Jack, who says:
"I was just telling your mom that my son is about your age."
I'm not sure what I'm supposed to do with that. Have you noticed that no one ever says that to old people? You're eighty? Why, I have an uncle that age!

Or the part where Allie and Kit have disguised themselves to sneak into a club. Allie asks Kit, "What's with the bodacious ta-tas?"
Vinyl Princess is full of these catch-you-off-guard funny bits. And her humour is the type to make you exclaim, "yes! That's EXACTLY what it would be like!"
And I really liked Allie's approach to one guy in particular in her life. I won't give too much away, but when she finally realizes who the valuable guy in her life has been, I thought I'd get another hundred pages of them being coy and shy together, neither one wanting to make a move. But Allie jumps right in and makes a few bold moves with her new-found crush. I was very proud of her. And a little in love with her guy. Actually, totally in love with her guy. He is quirky-cute, but very crush-worthy.
Veep is an ensemble story, with truly great characters, main and secondary. I loved her grandma--she makes everyone call her Estelle because Grandma is old-sounding--and her best friend Kit. There are so many great and hilarious situations in Veep, and lovable lovable characters. Not that I promote sequels just to get more from a story, but I would have no qualms with a Veep the Second! I'd love to see what became of everyone.
Mandy
Extras:
Allie documents her vinyl obsession on her blog, The Vinyl Princess!
Posted by Words Worth Blogs! at 10:40 AM

Okay, you have me sold. I'm not 'into' music much, but this book sounds so fun and funny and cute (you had me at 'like Gilmore Girls') that I must give it a chance. I can't wait to dive into Veep's world! Great review!

I agree with celi.a -- SOLD! This always looked cute, but it was low on my TBR... til today. Thanks for another great review.

Great review - you caught my interest. I may have to check this one out. :)