*Little Brother* Book Clubbing with A Book A Week! 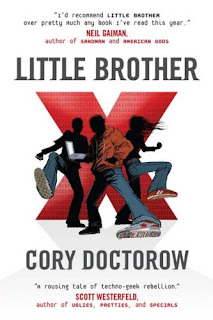 Mostly because I didn't know how to start this review, I went trolling around to see if I could pinpoint exactly what type of SciFi sub-genre Little Brother falls into. It's not exactly apocalyptic or dystopian, but it does fall into the category of "Mundane SF", which "focuses on stories set on or near the Earth, with a believable use of technology and science as it exists at the time the story is written" (wikipedia article, which has more info and links).

Little Brother feels like it's set exactly five minutes from now. Marcus lives in San Francisco and expertly hacks his school's "safety" mechanisms. Like the gait recognition technology--"these idiot cameras that were supposed to be able to tell one person's walk from another"--and "free" student laptops which log, record and analyze every keystroke made. Marcus lives in an alternate Big Brother reality which feels like a few small steps from our own. I don't want to get too pulled away by looking up stuff, but gait recognition technology is already being developed with the intent to use it for a society's apparent safety. And the linked story is two years old. 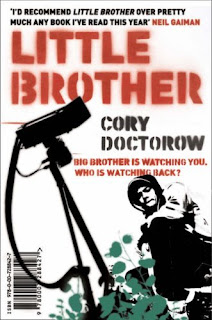 That's what I really liked about Little Brother--it made me very interested to know how technology may be used against society in the name of communal safety. Cory also presses the point that citizens are the strongest promoters of this safety, justifying the governing body's surveillance as a way to not feel afraid. Or, at least to Marcus, citizens over 25 are most afraid of their safety.

On an afternoon that Marcus and his group ditch school to play this awesome-sounding game called Harajuku Fun Madness, there is a major terrorist attack and he and his three friends are arrested by Homeland Security on suspicion of being terrorists. With no grounds, of course, except for being young, not in school, and in the middle of the attack. But getting back quickly to Harajuku Fun Madness, how amazing does this game sound:
It's an ARG, an Alternate Reality Game, and the story goes that a gang of Japanese fashionteens discovered a miraculous healing gem at the temple in Harajuku, which is basically where cool Japanese teenagers invented every major subculture for the past ten years...They slip the players coded messages that we have to decode and use to track down clues that lead to more coded messages and more clues...Imagine the best afternoon you've ever spent prowling the streets of a city, checking out all the weird people, funny handbills, street maniacs, and funky shops. Now add a scavenger hunt to that, one that requires you to research crazy old films and songs and teen culture from around the world and across time and space. And it's a competition, with the winning team of four taking a grand prize of ten days in Tokyo, chilling on Harajuku bridge, geeking out in Akihabara, and taking home all the Astro Boy merchandise you can eat.
It's when Marcus is checking out a set of GPS coordinates as that day's clue when the attack happens and he and his friends are violently arrested after waving down a military jeep, thinking that the police might help their wounded friend. The few days that Marcus is in some secret jail, after taking a short boat ride, is a turning point in the tone for the story. His imprisonment and humiliation--the absolute power that his captors have over him--fuels Marcus to somehow get back at them for taking his rights. Homeland Security also still have Darryl, or so Marcus believes, and he's commited to freeing his friend.
If I found the surveillance technology neat so far, what is cooler is the description of how Marcus gets around them. Cory has an amazing way of describing technology in super user-friendly ways. He actually made me want to learn how to write code:
If you've never programmed a computer, you should. There's nothing like it in the whole world. When you program a computer, it does exactly what you tell it to do. It's like designing a machine--any machine, like a car, like a faucet, like a gas hinge for a door--using math and instructions. It's awesome in the truest sense: it can fill you with awe.
There is also this very long explanation of how you can rig an Xbox to create a truly secure online connection. The idea comes from a book called Hacking the Xbox, "a wonderful book that tells the story of how bunnie [Andrew "bunnie" Huang], then a student at MIT, reverse-engineered the Xbox's antitampering mechanisms and opened the way for all the subsequent cool hacks for the platform." Actually Cory has a full bibliography of sources for someone who wants to know more about the tech referenced in Little Brother. And even as a person who has little background knowledge, I totally want to know more about security systems, how to use them, and how to hack them. It was the funnest part about this book--I want to read everything Cory read before he wrote it.
*****
Followed by an early morning chat with Kiirstin from A Book A Week, on Little Brother:

Mandy: I liked your review, it was spot-on.

kiirstin: Thank you! I liked yours as well. You seemed to focus more on the technological aspects than I did. I didn't realize, for example, that gait recognition tech was something people were already working on.

Mandy: I was inspired to do some further reading, which is what I hope people would do after reading the book. My further reading was Google related, but I love that Cory included some fantastic resources at the end of his book for anyone interested.

kiirstin: Absolutely. And the essays by others at the end, I thought that was a neat touch.

Mandy: Gait-recognition technology sounds so silly after reading LB. It makes no sense. I love that LB made me question something that might otherwise seem like an okay technology to develop.

kiirstin: I thought he was very tech neutral, in some ways. Not necessarily saying "this is a bad technology" but "it is stupid to use technology in this way." Also, it made me decide I'd better password protect my cell phone.

Mandy: Many times throughout the book I was like "hunh?" about the techno-talk, but I'm used to that in SciFi. What is so cool about LB, and "mundane SciFi" in general, is that the techno-talk is not techno-babble; terms made up and used for plot purposes in some SciFi.

All of his explanations made perfect sense and were well researched. He also explained things very vividly.

kiirstin: Which all leads to that creepy "um, yeah, this could actually happen. yikes" feeling, because the technology behind the story was so established.

Mandy: Completely. You could see it all happening. LB did make me more paranoid in general--which was a big theme in the book. It also made me want to hack my Xbox with my zero hacker knowledge, but exuberant interest.

kiirstin: I think making you a bit paranoid's exactly what it was supposed to do. Even the times where I felt it might be a bit over the top, part of me was whispering that it wasn't really that over the top.

And then there was that thing on the border with the SciFi author who got the crap kicked out of him by border guards, like, a week after I finished the book.

Mandy: I didn't know about that. Who was the author?

kiirstin: Dr. Peter Watts. The first article I read about it was at Making Light. The comments on that post are really wonderful to read, too. Cory Doctorow was the first one to really break the news about that one. Dr. Watts is a friend of his.

Mandy: Cory is the coolest.

I love that his book was impeccably researched. He really knows his stuff. It's great to see someone who has a real message and gets it across, even in fiction.

Not to denigrate fiction, of course, as I love reading it. A heavy dose of non-fiction is great, though, and a bit of a breath of fresh surveilled air compared to many contemporary YA books.

kiirstin: There's a lot of fluff out there, which of course is wonderful to read too, but LB definitely had meat to it.

He just felt so familiar with the subject material. Although... if I can admit... that was one of the small things that kind of bugged me every once in a while.

Mandy: At times it was too much for me, as well.

kiirstin: It was just sometimes that there was such a clear agenda. While I agree wholeheartedly with the agenda, it was still quite noticeable.

Mandy: I agree. It was a little heavy-handed. I did like how he brings up the question, a few times in the book, how can you tell the difference between the good guys and the bad guys? Both know how to hack but the good guys are the ones who use it for a "good" purpose. However, who's the judge of that?

He touches on this a few times. I would have liked him to bring this to the fore a little more in the book.

kiirstin: Oh yes! Definitely. I liked what he did with that but I did want a bit more. The thing with Marcus' father was interesting -- I think any parent reading that would understand Marcus' father's perspective perfectly.

He was like the walking question "How much freedom and privacy would you give up to protect your family." And I *know* for many people it would be "all of it" except that without a bigger picture it's hard to recognize that by giving up those things, you're also harming your family.

Mandy: And the question of security was huge in the book. But when does the need for a sense of security become a means to possibly "evil" ends? Can we ever attain the type of security we're so set on keeping?

kiirstin: For example, how far are we willing to go just to catch wankers who decide that putting explosives in their underwear is the ideal way to inspire terror?

At the risk of overloading, there's another great Making Light thread talking about that issue. The point that is made somewhere in there is that there will *always* be outliers that we will never be able to predict.

Mandy: The lengths that we'd HAVE to go, according to LB, would only be "good" for the whole, not the individual and then you get on the slippery slope of means to the end for the greater good, which sometimes bulldozes the individual. And Homeland Security in the book demands that predictability be the norm. Which is crazy to suggest. And desperate to maintain.

kiirstin: Yes, exactly! Actually, something that stuck with me about that even though I didn't write it down was an offhand comment made about a kid who was HIV positive and his parents didn't know. And because of DHS' movement-watching scheme, they flagged his (her?) movements and blew his cover. Which would quite possibly have ruined his life.

Actually, this is something we've started having to deal with in libraries. In the States, their have been a couple of cases where the DHS has wanted libraries to release patron records to see what someone who is suspicious has been checking out of the library.

"What if we haven't taught them the right way of being in the world and now it will come back to haunt us?" = blanket mistrust.

I really liked that push-back.
Thanks, K!

Pop over to Kiirstin's blog for HER side of the story!
Mandy
Posted by Words Worth Blogs! at 2:42 PM

Labels: Dystopian and SciFi, For the Dudes, Reviews A-I