Review of *Possessed* by Kate Cann 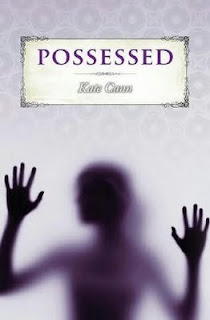 I want to mention the cover. I like it, it drew me in, but now that I've read the book my response is "hunh?"

My initial assumption of Possessed by Kate Cann = it looks like it might be a scary book. From the title I would guess that there is a ghost involved, maybe also an exorcism or scary ghost possession. I'm getting a strong "Paranormal Activity" (the film) vibe.

And it's really not this kind of book. Possessed didn't "scare" me. Not at all. But that's okay because it was a good book as it is. However, I would definitely classify it as a mystery. It was ghost-story lite. I could have used some more chills.

BUT, it also surprised me with nuances that I really enjoyed while reading. Themes and a general tone that I was not expecting. Rayne lives in a cramped apartment in London with her needy mother and younger brother Jelly. Her mother sleeps all day, she's her brother's primary caretaker and her boyfriend, Damian is coiled energy--kind of dangerous but also psychically draining. Rayne feels a low-level anxiety all the time, especially peevish with the constant noise of the city and the demands of the people in her l 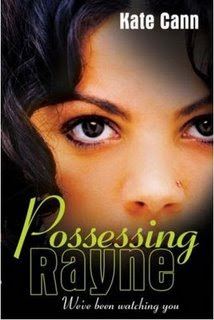 ife:
But what did she want? Whenever she thought about that, all she could come up with was: space. Silence.

So she applies for a number of jobs online, intending to apply to the one farthest away. Just to get away for awhile, she tells herself. It's how she discovers Morton's Keep, a grand old mansion miles away in the quaint town, Marcle Lees:

Marcle Lees--it sounded like a backwater village. The sort with one church, one school, one village hall. It sounded...empty. The kind of place to let your head out of its clamp, where you could breathe deeply with no one and nothing to make you choke up...

Morton's Keep is a great setting for the book. I do love a good haunted house. Rayne decides to stay in the "Sty" just outside the mansion, which gives her the willies and freaks her out so badly that she thinks of leaving. Actually I loved that Rayne was easily spooked; every noise at night was a murderer or a ghost and if dawn hadn't come, she would have run away from there in the night. It's nice to see a bit of scaredy-cat in a main character.

Rayne has this connection with nature, with being away from the city, that comes up in her first week in the country and which really adds something to the story. In my opinion it is the main story, apart from the dark presence at Morton's Keep and the weird history of the townspeople.

The scenes where Rayne realizes the power of nature in the book were the strongest, for me. One in particular is when she and St. John, who has suspect motives for wanting to get closer to Morton's Keep, are in the woods and a stag suddenly bursts through the foliage. His antlers are covered in moss and pieces of tree and St. John tells her stags strengthen their neck muscles by thrashing around in preparation for mating season. Usually cocky and irreverent, St. John starts backing away from the animal, while Rayne finds it alluring:

"Yeah, well, we should probably get out of here," said St. John. His voice had lifted in pitch; it was starting to sound nervous. "If he doesn't go after that other stag, he might come after us."

"No, he won't," said Rayne. "Oh, he's beautiful." She was feeling incredibly stirred. She thought the stag was noble, powerful, free. Its great spreading antlers could kill, or protect.

After, Rayne makes a move on St. John, stirred by the connection she has with the stag, and he rejects her, taking her home early. Her awareness of the primal energy in the woods is like a balm for her overanxious, shut-down personality. There were also some strong passages which surprised me:

She walked on, and the silence was so heady it was like wine, making her heavy, languid. There was no one to watch her, no one to judge her. She felt like her shape had gone, like her skin wasn't holding her in anymore, she was just flowing through into the woods. She sat down on a fallen tree trunk. The wood was all around her, silent but for tiny rustling noises, glowing in patches where the sun got through. She was flowing into it, she was part of it, all her edges were blurred.

Rayne also has a connection with Ethan, a member of the local Fire Festival group. Through the book this group has an ambiguous reputation. And they remain wary of Morton's Keep and its history. St. John and Ethan are enemies, Raybe doesn't know why, and she's torn between them, although mostly infatuated with St. John and his group of followers, who seem so cool.
I was also suprised by the romance in the story. I thought it would be about a girl leaving her possessive boyfriend at home to get some air and she finds herself in a similar situation in Maracle Lees. Which makes sense for her character, especially in the scene where she hides in a tree trunk which is my favourite scene in the whole book, very powerful. I thought it was cool that Possessed has to do with ancient rituals which have lost their significance, but haven't lost their power. There is a strong folklore magic in the book which was well written.

To me, the most frightening arena is inside the mind. I wanted to explore that, and the fear of the not-known, in this book. I wanted to look at what would happen when a town-girl is transplanted to a remote place where nights are pitch black and nature dominates. Rayne is deeply drawn to the woods, but she hears strange stories about them, and the mysterious fire people. She must fight to find out the truth, and be brave in facing up to who she really is ....

The sequel to Possessed is called Fire & Rayne, at least in the UK. Possessing Rayne is the UK title to Possessed, so the sequel might have a different North American title.

Possessed is coming out at the beginning of February.

Mandy
Posted by Words Worth Blogs! at 2:15 PM

I always love your reviews. They are soooo good! :-)

Shannon: Hey, thanks so much. I spend a lot of time on them. But am also open to feedback, like what would you like to know in a book review. Thanks for taking the time out to read them!

I think this is a thoughtful review..you really delved into it :))
I've been hearing a lot of things about Possessed, so I might just check it out!!