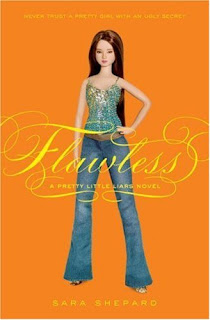 When I finished the first book in the series, I wasn't exactly sure if I was going to go all the way, read through all 7 books, just to find out who "A" really is. Now I'm hooked, and possibly doomed. The Pretty Little Liars books fills my need for a quick read that has a lot of intrigue but also the right amount of fluff. Well, not that the PLL books are fluffy, exactly. I find them smart at times, especially when insights are made about the popularity phenomenon in general. The way Alison had these girls basically doing anything for her is quite powerfully shown in the series, via flashbacks and such. Also even in the notes left by "A". In Flawless in particular you start to see Emily, Aria, Hanna and Spencer having to act out things that A compels them to do. Mostly out of fear of their secrets being found out.

And I think I mentioned in my review for the first book--I love that their secrets are normal. They aren't too over-the-top. Hanna has a past with Bulimia and her father continually rejects her in favour of his new family. Spencer keeps making out with her perfect older sister's boyfriends. Emily likes kissing girls. And Aria's father is having an affair that would rip her family apart. As secrets go, they are tame. Unless you're the one with the secret, and you go to school at Rosewood Day where anything even sl 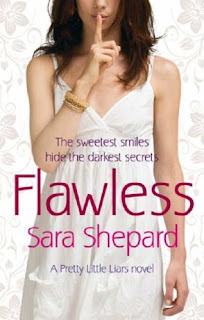 ightly out of the norm is mercilessly preyed upon. And these girls should know; they used to be Alison's henchmen, doling out bullying without question. The four girls let their fears control them, and Alison and A both feed on their fears, egging them on to act in certain ways that are ultimately destructive. Actually it's kind of painful at times, like "Noooooo!!! *slow motion waving hands*"

In Flawless, A is suspected of being a certain person who has had a run-in with the group in the past. More secrets come out, like Spencer knows more than she says she does. And her silence costs the group, and a really good secondary character. You find out more about the woman Aria's dad is having an affair with, and Hanna's volatile nature is pushed to the limit. Everyone is cracking and under the pressure they keep blowing their cool and making really stupid mistakes. The anxiety is high and it shows in their judgment.
I'm finding it a little hard to accept that A could be so omnipresent in the book. She can leave notes now within seconds of an incident happening. Physically notes, not just texts, on cars that people are sitting in, along lockers, etc. But the final note at the end reads:
If you were as smart as me, you'd probably have figured out who I am by now. OMG, not being a genius must be so annoying. And I can't help you with that one--I've got my hands full with four pretty little liars at the moment. But since you've been so patient, I'll give you one hint: Spencer may have a 4.0, but I've got As to my name, too. Kisses! --A
AH! FIVE more books. Man. I am really and truly tempted to grab Killer off the shelf at work and flip through to find out who A is. Oh no, Killer is number 6. Heartless is the last one. And it came out in January...And we have it in stock....Gah! There's been foreshadowing that any of the four girls could be A, or could also be Alison's killer. Emily's nickname is Killer, for a reason that wasn't obvious in the story. She was obsessed with Alison, and kissed her once. Emily thinks she was just in love with Alison, but then became very intimate with Maya, the new girl who moved into Ali's old house (could SHE be the killer?). There are so many red herrings in the story it isn't even funny. I truly truly hope that the end reveal will satisfy. Because I'm gonna really try and pretend that I don't see Heartless just sitting there on the shelf vulnerable to an impatient perusing.
One of my favourite parts in Flawless is when Hanna uncharacteristically finds herself at a Virginity Club meeting:
"We're so happy to have you, Hanna." Candace beamed. "You'd be a very positive role model for us."
"Thanks." Hanna felt a little thrill. Even if it was V Club, she wasn't often embraced like this. Not by her third-grade tennis coach, not by her friends, not by her teachers, certainly not by her parents. Perhaps V Club was her calling. She pictured herself as the spokeswoman of V Club. Maybe it was like being Miss America, except instead of a crown, she'd get a fabulous V Club ring. Or maybe a V Club bag. A cherry-monogrammed Louis Vuitton clutch with a hand-painted V.
I love how it goes from feeling this pathos for Hanna because she is kind of an unloved girl, or feels completely unloved, which is really very sad, to shaking your head, because seriously, a V Club bag?
Pretty Little Liars is like a messed up Gossip Girl, where Chuck Bass knows all your secrets and is calling all the shots. Fun!
Mandy

Don't read Flawless unless you've read the first book.
Posted by Words Worth Blogs! at 9:39 AM

Im only on book 3 and really havent had time to read more but Im totally addicted to this series and desperate to know who A is and I got to meet Sarah Shepard a few months ago and she's awesome---they're making this into a pilot for ABC--I would totally watch this show...maybe I could parody it too...

Frankie: Totally! I can so see PLL as a TV show. I thin I mentioned this in my last review. It would be great. And you should absolutely parody it!! I'm not sure what I'll do once Vamp Diaries takes a break and no more parodies!

Looks like an interesting (both somewhat frustrating) series! Just tell us who the killer is already ;)

Now I seriously want to read them all :)