Win a hardcover edition of *The Eternal Ones* by Kirsten Miller! 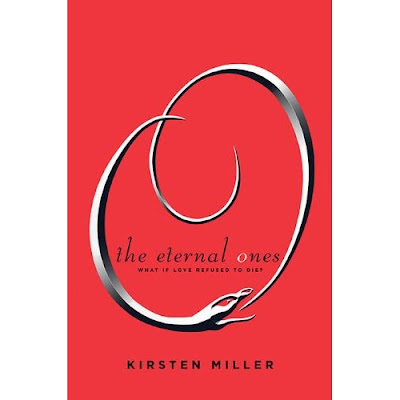 I LOVE the Kiki Strike series, which only consists of two books right now. The third book in the series will focus on master of disguise Betty Bent and is called The Darkness Dwellers.

In the interim, Kirsten has released another non-Kiki Strike book called The Eternal Ones--an epic love affair, reincarnation, and a murdered rock star. Plus 'Ouroboros' is a great word.

Kirsten has been seen around the internet describing The Eternal Ones as "sinister sexy strange". And she mentions being challenged by writing in the third person:

"I love writing in first person because it allows me to adopt a more conversational tone. And make lots of poo jokes. (Seriously, the Kiki books are full of them.) Writing in the third person was a challenge. I know it will sound a bit strange, but when I started The Eternal Ones, I didn't enjoy the sensation of spying on my characters. I got over it after a couple of chapters and let my characters' dialogue be the outlet for my unusual sense of humor" (interview with The Story Siren)

..And make lots of poo jokes. Nice. I kind of love Kirsten Miller.

So win her new book in hardcover! Enter via the form below and, as always, if you choose to pass along info about this contest via facebook, twitter, or if you follow EOS or become a new follower, tell me and be entered TWICE! Good luck!

Thanks for this contest - I've been meaning to pick this one up!

Awesome contest! Thank you! I'm a blog follower! :D (please enter me only if it is international.)

Thanks for the contest! I will have to read some of the Kiki Strike books as well as The Eternal Ones because I've heard such wonderful things about both.