*Win* a Hardcover of *Clockwork Angel* by Cassandra Clare! 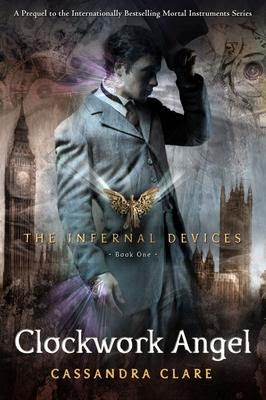 So I am back to blogging this week (late this week, I know), and kicking it off with a giveaway for a finished hardcover edition of Clockwork Angel by Cassandra Clare!

....and I KNEW it! Cliff Nielsen does the cover design. I don't know if you'll remember my love for Cliff, but maybe it's time I contact him for an artist interview. He's designed some great teen books, such as Ice by Sarah Beth Durst. And of course, Clare's earlier series, The Mortal Instruments.

A hypothetical snippet of that interview:

I have yet to read the complete Mortal Instruments series, starting with City of Bones, but it's definitely on my Soonish list.

Clockwork Angel is the first in a planned series called The Infernal Devices. On her wicked-cool website, Cassandra says that you don't have to have read Mortal Instruments to read Infernal Devices. The latter is a prequel series which compliments the original series and shares a few characters. The world of the Shadowhunters, shared by both series, is well-imagined by the author and she gives a breakdown of its description and laws here. Clockwork Angel is set in an alternate Victorian London, with an Angel-hybrid paranormal/steampunk twist. 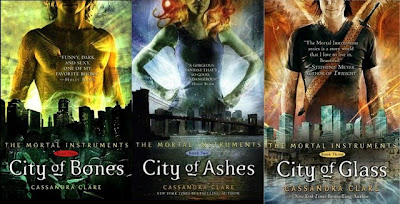 I love Cassandra's initial inspiration for the series:

"I actually got the idea for The Infernal Devices before I got the idea for The Mortal Instruments. It started with a strong mental image: the image of a Victorian-era girl and a boy standing on a bridge in London while creepy-looking mechanical monsters came after them. I had always loved the Victorian age in London, and always wanted to write a story set there; I knew I wanted to include steampunk elements, and I knew I wanted there to be a love story. I knew I also wanted to bring in fantasy and magical elements, and that the main character of the story would be a girl with an unusual power — the power to change her appearance and disguise herself as anyone" (full interview)

"standing on a bridge in London while creepy-looking mechanical monsters came after them..." what an awesome image.

So win a copy! Simply enter your name and email into the form below (information is never shared) and cross your fingers! Good luck to everyone. Contest ends September 20th!

Glad to be back,

I haven't read the series yet either. I have City of Bones on my bookshelf waiting for me to read. I've heard great things about this series and can't wait to see for myself.

Thanks for the opportunity :)

I really like Clare's writing, but you're right -- it's the cover of this one that really caught my eye. I almost never engage in giveaways, but how can I resist?

Thank you for this awesome giveaway! Please enter me only if it is international. :)

Loved the Mortal Instrument series! I can't wait to read this new one! Thanks to my friend, Sheila for showing me this!!

Thanks for the giveaway!