Please allow me to break away from books for a moment to describe an experience that was at least faerie-tale-ish. Last week, my husband and I took an early morning walk to Sabletine, a local patisserie, thinking of chocolate croissants and european-style coffee the whole way. As we approached Sabletine, something in the window of the next-door consignment shop (Patina) caught my eye. In the window tied to a  hanger that displayed a lacy camisole was a pair of pink and green ostrich feathers. Hmm. But hunger trumped interest so we went directly to Sabletine. Emerging about 30 minutes later, covered in croissant dust and energized by the strong coffee, we entered Patina.  I tried on a few things that, as it turned out, didn't fit; however, on our way out my husband pointed out a coat: long, black velvet, with a fur collar and lined with what looked like satin. I turned over the tag and read: 1940s Opera Coat. Hmm. I tried it on . 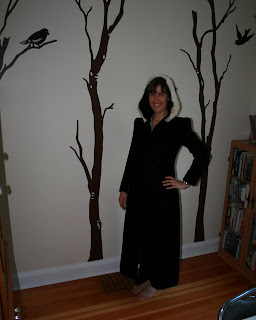 Opera Coat. Yes, I am indeed grinning like an idiot as I wear a winter coat in 35 degree weather.

Now here's where it gets a bit weird. When I looked in the mirror with this coat on, I really felt like I was in a some sort of mythologically-inspired folk tale. I felt as if I was late for a meeting with Baba Yaga; or that I should be strewing breadcrumbs behind me or something. Well, I WAS covered in croissant dust.

Anyway, I bought the coat, and the ostrich feathers. The lovely lady that sold them to me looked me straight in eye when I approached the counter, and frowned slightly. "Oh", she said, "You aren't the lady that was looking at this coat yesterday." "What does that mean!?" I thought, panicking. "Does that mean that I can't buy it!" Interrupting my rapid spiral of despair, she continued, "But she had plenty of time to come back and get it." Phew. 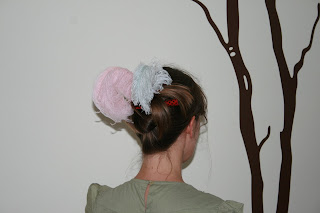 As she touched the ostrich feathers to put them in the bag, she told me that they had come to her through a older lady whose grandmother had worn them in her hair on her wedding day in the 1940s. Her fiance had just returned from the war and had purchased her her several gifts, two of which were these feathers and the lacy camisole that shared space in the shop window until I plucked the feathers away. After she told me this she said, almost wistfully, "And I guess that story dies here." Being a soft touch, I promised to share the story with others whenever I wore the feathers. So there you have it. 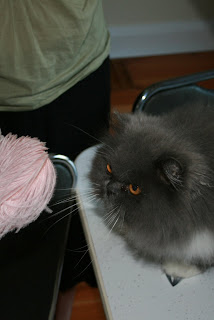 And this is my cat. He is VERY interested in this feather.

On a related note, lately I've been reading Holly Black's modern faerie tales. This woman knows how to write edgy, fast-paced fantasy. Tithe is a about a teenager who stumbles into the faerie world and unwittingly becomes a pawn in the rivalry between two faerie kingdoms. I love the fact that Black portrays teenagers as real people. There are suggestions of sexual situations, and some language, so I'd recommend these books to a 15+ audience. Totally worth checking out.