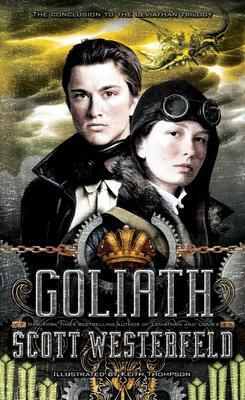 Goliath is the conclusion to the Young Adult trilogy, Leviathan. I whipped through the first two books in this series, Leviathan and Behemoth, so you can imagine how excited I was when I received an advance copy of Goliath.

The Leviathan trilogy is a steampunk-inspired alternate history of World War I. The series’ main characters are Alek, heir-in hiding to the Austrian throne and son of the murdered Archduke Franz Ferdinand and Princess Sophie, and Deryn Sharp, a young girl from London who dreams of being part of the British Air Service. Deryn sneaks her way in to the service by pretending to be a boy and by calling herself Dylan Sharp. In Westerfeld’s version of WWI, there are two main opposing factions: the Clankers and the Darwinists. The Clankers are countries, such as Germany and Austria-Hungary, that use steam-driven iron machines for warfare. The Darwinists use altered animals as their weaponry. Darwinists countries include Britain, France and Japan.

The three novels follow Alek and Deryn’s adventures aboard the airship Leviathan, a huge vehicle made out of a whale and an intricate ecosystem unto itself. On top of some thrilling combat with huge steampunk iron machines and some daring escapes, lies a budding romance between Alek and Deryn that builds throughout the series. Admittedly, the feelings are a little one-sided in the first two novels. As Deryn is disguised as a boy, admitting her feelings for Alek would be like admitting that her whole existence as a soldier has been a lie.

And if all this still doesn’t sell you on what a thrilling series this is, Keith Thompson’s black and white illustrations throughout the book are fantastically intricate depictions of the huge beasties and clankers. I found myself flipping ahead in each book to look at the next illustration, despite the major spoilers!

Behemoth and the entire Leviathan trilogy will appeal to teenagers and adults alike, especially history buffs and steampunk enthusiasts. A great series for teen boys who are reluctant readers, too.