I was hopping around the web and found some items that are interesting when juxtaposed. From e. lockhart's blog entry:

Last week, I dreamed I went to a community theater production of Twilight. Edward was played by a replacement actor. He was 35 and balding, but did a good job. The production had been running so long there were only a few people in the theater. I was writing an article on it for some internet magazine.
During pauses in the action, the actors occasionally broke character to chat with the audience. The girl playing Bella was applying to colleges and asked my advice. Afterward, I saw the Edward actor at the bus stop. We chatted a little. It was only then that I saw he was bald. He wore a hat when he was being Edward.
Analyze as you will. 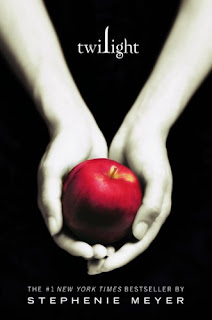 And then I found this little text byte from Stephenie Meyer about a dream she had of Edward:

I had this weird... I was sleeping in the guest room because my husband had a horrible cold and so I wasn't like in my normal surroundings and I had this dream that Edward actually showed up and told me that I got it all wrong and like he exists and everything but he couldn't live off animals... and I kind of got the sense he was going to kill me.
It was really terrifying and bizarrely different from every other time I've thought about his character.
It was cool because it added something different to my view of him.

Poor balding murderous Edward! I often have literary dreams when I'm reading certain books; (I know I mention Harry Potter a lot on this blog and that's mostly because of the HP Challenge, but) I dream about Hogwarts all the time. I often use settings from books in my dreams, or characters will pass through either acting like their book selves or otherwise.

What literary dreams have you had? Comment or blog about it and link here!