Wishful Wednesdays (hosted by Should Be Reading)

Today I've been thinking about The Ask and the Answer by Patrick Ness, sequel to The Knife of Never Letting Go. It's published in September and I can't even wait. This is partially because Knife ended on an almost literal cliff-hanger, which was frustrating at the time. I can see, once all three books are available and published in a massive volume together, that it won't be such a problem. But waiting for the second and third books to be published?..a bit annoying. Which is the only bad thing I have to say about Patrick Ness' books, because I really enjoyed Knife. Just read the first chapter, even just the first PAGE, and you will know what I'm talking about. 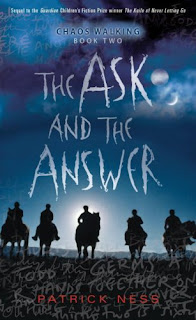 Prize, Knife begins in Prentisstown, a dystopian outcrop with not a woman in sight. Todd Hewitt, and every other male who had been exposed to the plague years ago, can hear a man's thoughts--and they're grim and brutal at times. Seeking peace and quiet, Todd heads out to the marsh only to find a great silence, like a tear in the world; Todd has found something that he thought had died, and it changes his world.
And that's all I'm giving today because the story decompresses in its own way, at times gripping and other times meandering. But the central mystery of the world of Knife is foremost and keeps me engaged. So a copy of The Ask and the Answer is my wish today! Do you hear that, Book Fairy?
Mandy
Posted by Words Worth Blogs! at 11:12 AM