My Favourite Reads *The Last Unicorn* I was obsessed with The Last Unicorn the movie, made in 1982 and, I feel, I watched every two weeks ever since. Play the theme song, performed by America *Yes!*, and I begin blubbering. So why didn't I read the book by Peter S. Beagle until two years a

go for the first time? Probably because it would have scared me more than the movie did!

A particularly loving premise write-up from Goodreads.com:
The Last Unicorn is one of the true classics of fantasy, ranking with Tolkien's The Hobbit, Le Guin's Earthsea Trilogy, and Lewis Carroll's Alice in Wonderland. Beagle writes a shimmering prose-poetry, the voice of fairy tales and childhood:
The unicorn lived in a lilac wood, and she lived all alone. She was very old, though she did not know it, and she was no longer the careless color of sea f 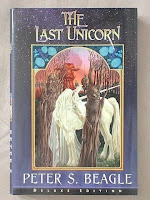 oam but rather the color of snow falling on a moonlit night. But her eyes were still clear and unwearied, and she still moved like a shadow on the sea.
The unicorn discovers that she is the last unicorn in the world, and sets off to find the others. She meets Schmendrick the Magician--whose magic seldom works, and never as he intended--when he rescues her from Mommy Fortuna's Midnight Carnival, where only some of the mythical beasts displayed are illusions. They are joined by Molly Grue, who believes in legends despite her experiences with a Robin Hood wannabe and his unmerry men. Ahead wait King Haggard and his Red Bull, who banished unicorns from the land.
This is a book no fantasy reader should miss; Beagle argues brilliantly the need for magic in our lives and the folly of forgetting to dream.

My reading experience:
Where to begin? In ways the book is very similar to the movie: I love that the movie kept its ending, dark and sad as it is. They didn't sanitize anything for little kids. The ending in the book is even sadder and perfect, because you get Beagle's flawless prose taking you there. If you read The Last Unicorn for no other reason, it is masterfully written.
But with the book you get all of the nuances of the story that had to be left out of the movie. The unicorn's aloofness, being an immortal mythic being is better captured in the book. Schmendrick is more of a rogue and kind of a jerk, whereas in the movie he's more bumbling. There is a darkness to Schmendrick. And Molly, the lady who is too old now to have a unicorn approach her, even though she's waited for it her

entire life--I cried for her story.
I'm losing my objectivity for this book, now, just remembering it!
The person I had the most pathos for was the prince, son of King Haggard, who falls hopelessly in love with the unicorn as she is in her human form. And I literally mean hopeless: you know from the beginning that the unicorn is not meant to be human. That is her purpose. She is a rarity and a changeling and you only really get a sense of her from the others in her travelling party.
I really don't want to give anything away about this book. I don't keep a lot of fiction at home on my shelves that I have already read; I usually give it away, trade it at used bookstores, etc. But I am inspired to track down every edition of this book to collect for their varying and beautiful covers. I read the blue frame edition but I am completely in love with the 80's cover. There is something so right about it.

This blog entry has made my day! Thank you, whoever is out there, for coming along with me as I wax emotional and nostalgic about one of my favourite books OF ALL TIME *cue America*
Mandy

My Favourite Reads is a weekly meme hosted by At Home With Books.

What a fun feature. I was just thinking about this movie the other day when someone was discussing Rampant.

I was totally scarred by this movie as a young child. The bull scared me silly, and my husband still gives me a hard time - teasing me about getting the movie and watching it - since he knows how emotional I get over it. I guess that means it's well done (the fact that I get that emotional). I never realized it was a book though. You do a great job of sharing your enthusiasm for the book and the movie!

Juju: Yeah, Rampant reminded me of it too.

Alyce: Thanks! I do recommend reading the book. Although the bull may scare you more; he's written very well.

i have a really hard time trying to get a memory about this book, of course, as always happen, i forget most of the time the names of books and movies totally chance from one language to another sooo after checking your review i realiced the name in spanish was Leyenda ( legend ) haha well anyway now that i know what book and movie you are talking about then i can totally say i love both too :-P thanks for the good memories M!

I never saw the movie, but I remember reading this book a couple of summers after someone told me that TRUE fantasy fans read Peter S. Beagle. I enjoyed it, but I really go for his short stories more. He's wonderful in any medium though - truly classic. Great choice!

My (very) late pick for the week is L.M. Montgomery's stand-alone novel Magic for Marigold.

Juan: Aw, I'm glad you grew up with it too! You'd think that The Last Unicorn wouldn't be too difficult to work into a Spanish translation as a title instead of Legend. :)

Celia: Beagle's short stories huh? I will check them out. He's amazing. I'll also check out your link.