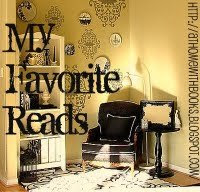 I found out about At Home With Books while bloghopping and she has a weekly My Favourite Reads post. The point is to go all nostalgic and showcase a book from your past; and busting out the book nostalgia is what I'm all about (seriously, I can have a fit of nostalgia a week after reading a truly good book). So here is my pick for this week:

Sweetblood by Pete Hautman
I read Sweetblood about a year ago, which technically counts as my past, and fell in love with the genius of Pete Hautman. My partner works in a used bookstore downtown (where I used to work, more about my used bookstore love in a later post as Part Deux of my Library Love post), and he brings me home books that he thinks I'll like (he's kind of perfect that way). He brought home this book that shrieked "I was packaged in the nineties to appeal to goth-grunge girls with attitude". And I know it appeals because I would have loved the cover then. But the premise was what pulled me in, followed by a "you had me at the first page". Actually let me go get it so I can quote how it opens:
Blood is my friend. Without it my cells shrivel. Without it I die.
At night, alone with myself, I hear it rushing through arteries and veins, platelets tumbling in a soup of plasma and glucose through slick, twisty tubes, lining up to enter narrow capillaries, delivering oxygen and fuel, seeking idle insulin. It is a low-pitched sound: wind passing through woodlands. 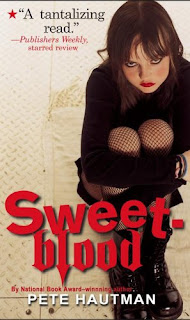 Sixteen year old Lucy is a diabetic and has this amazing theory that the myth of Vampirism over the ages was caused by a lack of education about people with diabetes. She shares her theory with everyone from guidance counselors to her favourite online chatroom, Transylvania Internet. Until she attracts the wrong kind of attention.
Why I chose this book:
Well, apart from the fact that I absolutely loved it, it is a completely unique take on the "vampire" story. The focus is on Lucy who can't seem to care enough to properly control the ups and downs of being diabetic. She has no connection to anyone around her and only finds expression through this group of self-proclaimed vampires. Draco, the groups much older leader, takes a particular interest in Lucy's theories about vampires, claiming that he's the only "real" vampire she'll ever meet. The whole book, though, is about her choices. Hautman is a genius at creating very real characters who evolve organically. There is not much to the plot because this is a very character-driven book. And I loved it for this. For all the packaging and slightly misleading backcover blurb ("caught up in late-night parties and goth culture, she begins to lose control of her grades, relationships, and health"), this is a real gem of a book. I went on to read Invisible (holy crap awesome) and Godless (funny and great--it also won the National Book Award, no small feat) right after it. I've taken a bit of an author-binge break and was a little put off by his Poker plot books, but reading more Hautman is on my list of things to do before I die.
And it looks like I'll cross this off the list sooner than I thought as Pete has a new book coming out in September: How to Steal a Car.
From the publisher:
Some girls act out by drinking or doing drugs. Some girls act out by sleeping 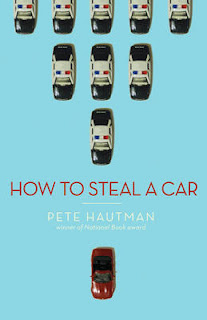 In How to Steal a Car, National Book Award winner Pete Hautman gives us a thrilling ride through one girl’s turbulent life -- one car theft at a time.

Previously:
My Favorite Reads A Handful of Time

Already Read This? Try:
Inexcusable by Chris Lynch
Posted by Words Worth Blogs! at 5:44 PM

Labels: For the Dudes, Reviews A-I

Wow, this sounds great! I have a little brother with diabetes, and his relationship with the disease has been turbulent, to say the least. Vampirism as an allegory to diabetes is a very interesting thought...and then REAL vampires are fun, too.

Great pick! I'll be checking out How To Steal A Car very soon.

Celi.a: I hope to get a copy of How To Steal A Car soon, too. I keep kicking myself because I don't realize that some of my favourite authors have new books out! I'm just not paying attention, lately!

I haven't read anything by this author, and have to admit that the cover and the title would have been a total turn-off. I just don't read vampire books, but this sounds like it's more of a teen issue book and less of a real vampire book.

Alyce: You're right on both accounts--the cover doesn't do the book justice and it IS more of a teen issue book, with a hopeful ending.

Oh my God, I LOVED Sweetblood.

Oh my God, I LOVED Sweetblood.