Most of Gena Showalter's other books have naked men on the covers. But they're also marketed for an adult audience. One thing I like about the new Harlequin Teen imprint is that the covers are toned down: they may be sexy books but the guy on the front is fully clothed. I like a little mystery in my leading men, I don't want to know if he has an inny or an outy bellybutton before I've cracked the book.
So I really like the cover of her newest for the imprint, Intertwined. Although half his head is cut off, the guy is wearing jeans and one of those waffle shirts. He's even got a white teeshirt underneath, covering up any chest sneak peeks! The title's text is a little tattoo-y, but cool. Just, there is such a HUGE trend in paranormal romance to have everyone tattooed.

Actually, let's take a quick Teaser break and insert this awesome video having a hilarious look through paranormal romance covers--and YA isn't exempt! (seriously, it gets so funny near the end):

Back to the Teaser. From the publisher:
Like most teens, Aden Stone has friends.
They just happen to be the four human souls living inside him. One can time travel; one can raise the dead; one can possess other bodies; one can foretell the future—and has even predicted his death.
Everyone thinks he’s crazy, which is why he’s sent to a halfway house for wayward 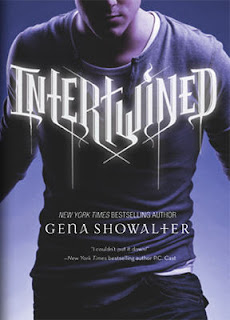 teens. But he doesn’t mind.
For months he’s been having visions of a beautiful girl entering his life—a girl who will either save him or destroy him. And even though he’s half in love with her before she ever arrives, he’s unprepared for the centuries-old secrets she brings with her.
Together, they’ll be forced to enter a dark underworld of intrigue and danger... but not everyone will come out alive.
And the Teaser:

(This one is from the first meeting between Aden and Mary Ann. MA's hilarious best friend is speaking to him)

"Here's her number. If you still want to call her, that is, considering her rudeness," the girl named Penny said, sliding a piece of paper toward Aden. "The second number is mine. In case you decide you want someone a little more available." Then she, too, stood and walked away from him.

Teaser Tuesday is a weekly meme hosted by Should Be Reading.

"I like a little mystery in my leading men, I don't want to know if he has an inny or an outy bellybutton before I've cracked the book."

I snurked tea up my nose. But it is so true!

I've had my eye on this title. I know several people who will like it, including myself.

Kiirstin: it's true, though. If you like to read books with naked men on the front then you have to read them at home. Have you ever seen someone reading a book like this on the bus? I am going to look out for it from now on!
Sorry about the tea! :)

Juju: That was, verbatim, my first reaction too :) But they are focusing, it seems, on paranormal romance for teens. There titles seem cool so far. P.C. Cast has written one of them.
In their writer's guidelines HT is looking for people who write with Twilight, The Hunger Games and The Book Thief in mind. So it looks like they aren't just following Twilight's lead.
You can download an e-book prequel to one of their titles here:
http://harlequinteen.com/teen/

I'm excited about Harlequin TEEN's imprint... and that the books are public-reading appropriate.

Long time I read any Harlequin!

Teaser Tuesdays: Faces In The Fire by T L Hines

Intriguing tease this week! Looks like yet another book to add to my tbr list :) You can find my teaser here.

Hey, I will check out all your links!

Hehe I remember that part in the book it was really funny :)

Celia: Ha, yeah I didn't give enough context. She IS kinds flirting, but the reader knows the guy wouldn't go for her. She's more comic relief, it seems. Which is a little sad for her. Do funny ladies ever get the guys?

Oooo, I wonder what's going on? When this book comes out on September 1st, I want to zoom zoom to the bookstore. Hope I don't run into a street lamp.

Linda Ellen: ! It should be available now. We have one on our shelves at work! Most publishing dates, outside of Harry Potter-related, are fluid. Sometimes titles are shipped ahead of time.

o_O So I can zoom zoom now? *blush* Wow, I didn't know that. I guess I kept believe that release dates are pretty strict. Thank you so much for letting me know. =)