Who were those models?

I went to a matinee movie this afternoon to see District 9 (so great!), and I was reading through their Famous free movie magazine. They usually have the teen edition but I didn'

t see it anywhere. But this issue had a neat little article about Amanda Seyfried (Jennifer's Body, Veronica Mars) and how she used to be a model for teen novels by Francine Pascal (Sweet Valley High fame)!

The three Victoria Martin books written by Francine Pascal all feature Seyfried on the cover, and my favourite is for My Mother Was Never a Kid with half of her hair crimped and half straightened. These titles were originally published in the eighties but they must have been repackaged in the nineties because Seyfried is 23. Oh, no, I just looked down and saw that they were repackaged in 2003. And apparently she starred in Mean Girls just soon afterwards (she is 11 on these covers). 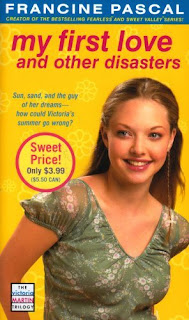 Hanging Out With Cici was Pascal's first YA novel and it was later renamed My Mother Was Never a Kid after it was televised. AND it's actually a time-travel book as Victoria Martin goes back in time to see her mother at her age. Here's what one person on goodreads.com wrote about this book:

The creator of Sweet Valley High digs deep in this fantasy about a girl who gets caught passing a joint, bumps her head, awakes in the 1950's and befriends the one person on earth she can't tolerate: her mom.

Many people mention liking the Victoria books better than Sweet Valley High! It's funny because I often wonder who is on the cover when books decide to package with photographs of people. Obviously most are just teen models, but I often want to know who these people are!
Mandy
Posted by Words Worth Blogs! at 2:46 PM

After I had read Coffeehouse Angel by Suzanne Selfors, I looked up her website and she has this little message on the side, saying something along the lines of "if you know who's on the cover of Coffeehouse Angel, please let me know!"

From what I understand, the model for that book cover was working for a modeling agency, but then the agency decided to pack their bags (bankrupt? out of business?) so the author never got to contact them to know who's really on the cover of her book. At first, I thought this was funny, but then I figured that if I had written a book, I'd sure want to know who's on the cover, and maybe even meet them. =)

This looks just like Amanda Seyfried from Mamma Mia.

I can't wait to see District 9.

she's on Big Love too! and she somehow looks the same at 11 as she does now. nice post!

Linda Ellen: Thank you SO much for the award! I'll head over.
Very cool story about the unknown model! I would also want to know who is on the cover of my book!
I wonder how she WOULD find out?

Juju: She is the same lady, thanks for reminding me!

Nightjar: totally, she has this perennial teen look!

Of course, she was also in Veronica Mars (although, she was dead). I never really noticed it was her, but now it all makes sense! Thanks for sharing