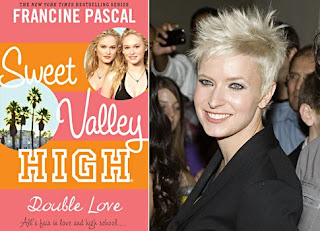 Actually immediately after reading that Diablo Cody will be writing and adapting the books for a movie, I ordered a copy of the first SVH into the store. Have you seen the new covers for the books? I kind of remember a year ago when they announced the new SVH packaging, and I even got a new SVH tote bag. I KICK myself now because I have since misplaced/lost it. It was very teeny-bopper so maybe I would feel like a creeper actually walking around with it.

Also factored into my decision to read SVH is what I found while trolling Wikipedia:

The Sweet Valley series has often been criticized for its unrealistic portrayal of teenagers (although this was somewhat rectified in the Senior Year series), and its outlandish plots, especially within the original Sweet Valley High series. Some exotic examples include:

*The twins battling a werewolf in London
*Jessica falling in love with a vampire
*The twins and friends being chased by escaped criminals in Death Valley
*Margo, a psychotic young woman who bears an uncanny resemblance to the twins, and later, her own twin sister Nora, attempting to murder Jessica in a diabolical scheme to 'replace' her
*A former classmate of Alice Wakefield's luring them to a beauty spa with the intention of stealing Alice's face via a face transplant
*Elizabeth and a Parisian prince falling in love
*Elizabeth and an English viscount falling in love
*Lila Fowler marrying an Italian count
*The twins and many of their classmates being unrealistically "beautiful" in a model-like way and never having acne, oiliness, pubescent awkwardness, bodily odors, or greasy hair the way most real-life teenagers have
*Alice Wakefield being described as young and beautiful and often mistaken for their older sister even though her kids are in high school and college
*Multiple kidnappings, attempted murders, sexual assaults, and stalkings
*Multiple proms and school breaks during one year, and often out of order
*Sweet Valley High hosting over fifteen dances (including two proms) during one year, which is generally considered excessive for high schools
*Elizabeth receiving at least three marriage proposals before age 20
*Jessica having at least five boyfriends who died in the series

This list made me laugh so much. Laugh and order the first book. What have I been missing? I think my favourite is the 15 dances in a school year followed by the soft criticism "generally considered excessive". Also, face transplants? Too awesome.

As I mentioned in my I Never Read *V.C. Andrews* post, I really don't have a classic teen reading background to look back nostalgically on. Not that I want to read all of the Sweet Valley High books, but I'd love to remedy my lacking teen lit background.
Oh, check out The Dairi Burger blog. She has been reading all of the SVH books, and other teen drama spin-offs and blogging alongside. Her posts are hilarious.
Mandy
Posted by Words Worth Blogs! at 5:18 AM

I am totally game for a re-read if you're up for a first-read.

Katie: You're on!! Hey, want to do something cool and both read and then write a dual blog posting of our reactions? We can jointly post it on our blogs.

Wait. That list is amazing. I have also been missing out, since I think I went directly from The Babysitter's Club to The Hobbit and never looked back. Plus the old covers were pink, weren't they? And I went through a phase where anything pink was Not On.

Looking forward to hearing what you have to say...

Kiirstin: I went through a pink is not in faze too. I was blonde as a kid and always given pink things because of it. I yearned for the blue things my brunette cousins got. Like pyjamas. To this day i only buy blue pyjamas. They have owls on them.
But isn't that list awesome? On wikipedia, after the word criticized there was a who? in brackets, so you could source these criticisms. As if the whole WORLD wouldn't criticize this list of things in a series of books. "Please cite your sources as to who exactly would criticize these books of committing the following...". So much fun.

Wow!!!! That's crazy!
I was interviewed in The Bookologist this week, and one random fact I gave about myself was that I've read everything Francine Pascal ever wrote.
Reading this post, though, I'm thinking that I might just have to go back and reread them.
Anyhow, love your blog - you should check mine out and enter my contest!

Brizmus: I WILL check out your blog and the link you've left. Thanks for the visit!