Once Upon a Time *Perfect Chemistry* and Giveaway!

I haven't had a book giveaway in a while, and they're so much fun! Lucky for me I found a second copy of a great little book I read a few months ago, Perfect Chemistry by Simone Elkeles. The Story Siren said it best when she described this book, after giving it five stars, as Pretty in Pink meets West Side Story.

It's a love story, for sure, but more is working behind the scenes. Alex and Brittany can't quite figure each other out. Is Alex really involved with gangs and violence like his reputation suggests? Is Brittany as perfect as she seems? Simone 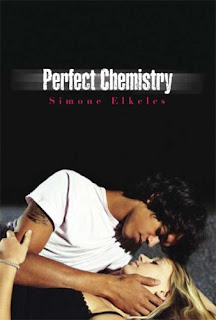 Elkeles deftly avoids romantic cliche in their love story, which is firey and exciting. I read this book in one sitting, knowing the two would probably get together but really needing to know how.
You'll totally have a crush on bad boy Alex.
Here's a scene very close to the beginning of the book:
"Next time, watch where you're goin'," he says, his voice cool and controlled.
He's tyring to bully me. He's a pro at this. I won't let him get to me and win his little game of intimidation, even if my stomach feels like I'm doing one hundred cartwheels in a row. I square my shoulders and sneer at him, the same sneer I use to push people away. "Thanks for the tip."
"If you ever need a real man to teach you how to drive, I can give you lessons."
Catcalls and whistles from his buddies set my blood boiling.
"If you were a real man, you'd open the door for me instead of blocking my way," I say, admiring my own comeback even as my knees threaten to buckle.
Alex steps back, pulls the door open, and bows like he's my butler.
Flipping through this book again I remember that it has some racy scenes and language. I kind of forgot about this because I remember this book having depth, as well. Alex and Brittany are fully-realized characters with secret personal lives, but there's also this spicy romance developing between them. Maybe I want to keep this book for a re-read....
Nope, I'm giving it away. Just leave your name and e-mail and a comment if you wish, I'll randomly choose a winner in two weeks!
Mandy
My Review of Hush Hush, more bad boy action.
My Review of Shiver, another romance told in alternating voices.
Posted by Words Worth Blogs! at 5:00 AM

It doesn't sound like my type of read (so please don't enter me). But I did like the quote you added :) The cover is pretty hot too! ;)

Juju: Heh. I don't know if you can make it out but he has a tattoo on his arm *hot business*

I want to read this book!

You have so many great books! I'll be following to see what books you'll be reviewing in the future.
And Perfect Chemistry has been on my list for a while, so please count me in. :)
Thank you for the review; the book sounds even better than it did a few days ago!

Sorry, forgot my email address like the silly person I am.

Oooh, I want to read it! It sounds really good. :)

I think I've read another review for this book and it caught my interest....

thanks for the giveaway!

count me in please
throuthehaze at gmail dot com

OMG, that teaser you posted was awesome!!! I have to get my hands on this book. Please enter me. Pretty please :D

Nice review! This sounds really interesting. :)
I'd like to be entered, please.
zombiegirrrl21 at aol dot com
P.S. I linked your contest on my sidebar. ;)

I love the cover and the book looks really interesting!! Enter me please!!

I love the cover and the book looks really interesting!! Enter me please!!

You are absolutely right. I'm completely in love with Alex. Please enter me!

I hope I'm not to late to enter this contest!

Thanks to everyone whoe entered!! CHeck back for more giveaways in the future!