What She Said About.... *Tamora Pierce*

Tamora Pierce, author of the Alanna series (Song of the Lioness), among many many others, had this to say about Eternal by Cynthia Leitich Smith: 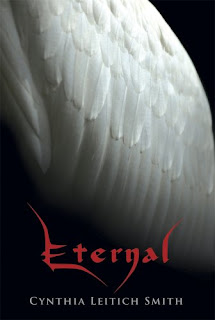 This is the quirkiest tale I've read in a long time! Guardian Angel Zachary loses his wings and his status when he interferes with his charge's good death and Miranda becomes the vampire king's newly adopted daughter. Now Zachary must pull himself out of his drunken tailspin and see if he can salvage what's left of the coolest young vampire's soul before it's too late for either of them--if it can be done. After all, in Miranda's new life she's rich, popular, adored by her new father, dressed to the nines, and immortal. What's worth losing all that for?
Just having to know how the characters were going to get around the rules of the royal household, and the deadly vengeance of Miranda's new dad, towed me from page to page. I just had to see how it came out! (Source)

Eternal is a semi-sequel to Tantalize, which is about a girl and her hot, vampire-themed restaurant. I read Tantalize a while back and thought it was quirky and funny. Eternal is a sequel of sorts, but it looks like it only shares the same world and some of the characters from Tantalize. I love the cover, we have a copy at work, and I have always wanted to read it. And I totally will after Tamora's review.

She also gave 5 stars to Graceling by Kristin Cashore, which I am really wanting to read. The sequel, Fire, comes out this month. I have a shiny, beautiful galley copy of it waiting for me to finish the first book.

I am loving that authors are making themselves so approachable online. It's very cool to know what a beloved author has to say about books you might be interested in.

I really liked Tantalize therefore I better get to reading this one. I love reading about angels. Great review.

I love the authors are reaching out too! Makes me feel like I'm part of the promotional team. I love it.

I gotta read Graceling. I've heard such great things about it.

Juju: Angels? I assume you've read Hush Hush? Wait a minute, I remember your review of it just a little while ago..
Yeah, I'm going to pick up Graceling next i think. I've heard a ton of great stuff about it.

Graceling is the best YA book I've read in a long time. Looking forward to the next one, which I understand is more of a companion book than a sequel.

Thanks for the heads up on Tantalize and Eternal. I haven't read either and will put them on my list.

Clare: Awesome. I want to read Graceling next. For sure, now.

"Fire", the sequel, is like a prequel written afterwards, or so it says on my copy. Neat. It has to do with the background of one of the characters? Maybe the guy character?