Review and final reading of *The Hunger Games*

So now that everyone and their monkey has read The Hunger Games, I've decided to read and review it. And it is totally great. Actually, I haven't finished about 100 pages of it because I wanted to blog my way through it as I finish the book, for everyone who HAS read it and knows that it's good.
If you haven't read it, jump on that train. It is worth all the hype you've heard about it.
When I started reading, I had read no reviews of the book. I knew that people deeply loved 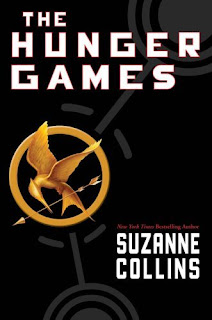 it and that there was a question of loyalties about two boys Katniss had in her life, Team Peeta or Team Gale, and that is all. I really loved not knowing anything about the content of the book and just diving in. The Hunger Games had all of these elements that surprised me and set it apart from, say, just reading The Running Man by Richard Bachman.
So for anyone who hasn't read The Hunger Games, make it the next thing you do, and this is all I'm giving you:

Katniss is a 16-year-old girl living with her mother and younger sister in the poorest district of Panem, the remains of what used be the United States. Long ago the districts waged war on the Capitol and were defeated. As part of the surrender terms, each district agreed to send one boy and one girl to appear in an annual televised event called, "The Hunger Games." The terrain, rules, and level of audience participation may change but one thing is constant: kill or be killed. When Kat's sister is chosen by lottery, Kat steps up to go in her place.

Anyone who HAS read THG may continue on to the palace of spoilers. With a nod to Bookshelves of Doom, here is me reading the last 100 pages or so of The Hunger Games:

Chapter 21 Page 278: Peeta has just been drugged by Katniss and I am glad because I was annoyed that he wanted to drag himself behind her if she went to the mock feast/bloodbath. What good would that have done? I completely get the message he's trying to give the Capitol, but this martyr dragging issue was a little over the top for him. Katniss is awesome and can totally take care of herself. He'd probably get her killed. So, drugged you are, Peeta.

280: "I wonder what he makes of all this kissing". Yeah, poor Gale. I don't feel as connected to his character as he was only really introduced at the beginning and I haven't heard from him again. I wonder if he's behind the little packages Katniss has been getting.

285: I really don't get when the bad guy taunts the good guy whenever they have the upper hand. When you cheese people off they get angry and stronger and more determined. Stupid Clove.

287: Yeah, see? Rock bashing your head? Boasting about the people you've killed = someone willing to knock you down for your pride.
289: "I jam the needle into Peeta's arm..." *barf*
Green-an-silver moth? Hmm...
292: I love that this square of plastic that Katniss grabbed at the very beginning is a great resource throughout the book! It keeps coming in handy, this time as a canopy in the cave roof. I'm wary about Peeta. Is Suzanne Collins going to make him turn on Katniss? Or is he sincere?
295-298: kissy kissy
299: I still don't completely get the notion of sponsors in the games. What is their role? Haymitch gets to send provisions to Katniss and Peeta, but why then wouldn't he do it all the time? And why would he be so concerned about their "performance"? It's grim also because Haymitch won his own games so he knows how barbaric and horrible the whole thing is.
300: I totally know something is going to happen with the mockingjays. They're going to become useful to Katniss by the end. There has been a lot of foreshadowing.
306: Yeah, I just went through 6 pages of mushy "I've always noticed you" business and finally Katniss realizes how grim the whole thing is. If she wins, she'll be a mentor to kids entering the games from now on, perpetuating the cycle as if the whole thing is all right. And Haymitch must have killed the other kid from his District when he won in the past. And had to watch every year as he sent out two kids to die at each Game.
315: I don't get that Peeta is kind of wimpy now. I mean, the guy was harsh when he went back into the forest and killed a girl when he was running with the Career group. He was harsher and more of a survivor. Now he can't even tell that he's being loud in the forest and he seems totally reliant on Katniss.
318: NO!! Foxface ate the cheese! Realize it and look out for her, Katniss!
318, a few lines down: Foxface just died by eating the wrong berries? It doesn't seem like a good enough death for her since she was so resourceful. Also, it makes it too easy since Kat and Peeta would have had to kill her to win. The moral battle would have been more interesting. This is a little too easy. PS Katniss, told ya about the cheese.
320: Okay, okay, I guess Foxface would not have questioned berries that she thought Peeta and Kat were going to eat themselves.
"And she's very clever, Peeta. Well, she was. Unil you outfoxed her". That's a little too hammy for me. And a little too soon to be chuckling over her death, if at all?
333: The dead tributes have been turned into wolves?
341: That's pretty dark, Cato taking so long to die. I wonder what the Capitol is going to do about two tributes winning and the audience cheering for their romance? It goes against what the Capitol stands for. I bet Kat and Peeta will be forced to kill each other.
342: Yeah, I knew it. Fight to the death.
345: The Capitol didn't call their bluff. I'm surprised. Maybe they didn't think Kat and Peeta would kill themselves. Even after everything that's happened.
354: Yeah, now Kat has to return to the "real" world and realize she can never live there again after being part of the games. I'm really eager to see how it ends. Although, knowing that there's a sequel, I guess it won't really be the endong of the story.
357: I knew the Capitol weren't going to be okay with their romance and the way the audience responded to it. I guess that was pretty obvious throughout the book.
371: My stomach is in knots. I don't know what's going to happen and the tone is so chilly.
373: Oh my gosh, Peeta, grow the hell up. You guys just survived a horrific nightmare scenario and you're angry that Kat might not have been completely in love with you? Give her time and space, man.
374: Umm, as an ending to the first book in a trilogy it's okay, but I would have been so angry if it was a stand-alone novel. Generally, I didn't love that the book had a focus on Peeta's interest in Kat above the games themselves. I get that it was a rebellious provocation to show this romance and it worked in their favour. But I thought it was lame of Peeta to focus on his feelings for Kat above the fact that 22 kids died around them for weeks, some at their own hands. Kat certainly got this. I was hoping for something more from both of them in terms of how they might go against the Capitol. Maybe in the second book?
I don't know if I'm either Team Peeta or Team Gale. I'll have to keep reading. Can I be Team Rue or Team Foxface?
Mandy
Posted by Words Worth Blogs! at 10:58 AM

This was a very fun way to review :)

Juju: Cool, thanks for saying so. I just assumed that everything had been said about The Hunger Games already!

I haven't read this either! (I skipped the spoiler parts). I got it from the library yesterday, though, so hopefully I'll have it read and reviewed in the next week or two!

Absolutely, you can be Team Rue. She was one of my favorite parts. I love the idea of doing a review by keeping track of reactions/page numbers. Awesome.

Mandy, what an awesome review! I love how you did the "spoiler" and then blogged the last 100 pages. So happy you enjoyed this book! Next up...Catching Fire. I'm about 150 pages into it and have been loving every page.

I love the fact that you did it like this, that is so cool!