From the back cover of the galley edition:
I would give a lot to see that smile again, directed at me.
It may not be much, but I would give up everything I've got.
In an explosion of his own making, Lucius blew his arms off. Now he has hooks. He chose hooks because they were cheaper. He chose hooks because he wouldn't outgrow them so quickly. He chose hooks so that everyone would know he was different, so he would scare even himself.
Then he meets Aurora. The hooks don't scare her. They don't keep her away. In fact, the 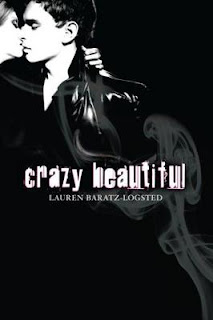 y don't make any difference at all to her.
But to Lucius, they mean everything. They remind him of the beast he is inside. Perhaps Aurora is his Beauty, destined to set his soul free from its suffering. Or maybe she's just a girl who needs love just like he does.
A modern retelling of Beauty and the Beast, Lauren Baratz-Logsted's Crazy Beautiful strips away the original tale to get to its essence, revealing truth about forgiveness, redemption, and the power of love.
The first thing I thought when I finished reading this book was, "100 more pages, please". It was over too quickly and I felt the overall development would have benefitted. The back cover says the published book will be 256 pages but my galley comes in at 193 pages. So, more please!
Crazy Beautiful is told in the popular style of he-said-she-said, where you'll get alternating chapters from both Lucius and Aurora's points of view. In this book it led to a bit of an imbalance; I had a great view into Lucius' character, but I was left hanging with Aurora. I didn't get a handle on her character. She was just this beautiful girl with a heart of pure pure gold and a deceased mother, which only makes her more tender toward people, and especially Lucius.
Lucius, though, was moody and withdrawn, but also funny and surprising. He has this big brother antagonism with his little, popular sister and will menacingly raise his hook in the air above her head to be intimidating. Lucius is also pretty witty verbally, which I think you'd have to be if something this huge hung over your life and you went to HIGHSCHOOL and had to deal with the kids there. Some of his lines are great.
I would have loved a little more heat between the two. There isn't enough romantic lead-up to make you need for them to get together. I like witty, charged banter. And maybe more push-and-pull between them; Aurora working through her mother's death and also through her feelings for Lucius having no hands. It is just accepted that she doesn't care about looks, but she would still contemplate her feelings about this. I didn't really know what Aurora thought and felt.
But Lucius was a great character to get to know. It really was his book. When I started reading I was like, "why would you purposefully get hooks and then walk into highschool and add another layer of suffering to this whole situation; just get prosthetic hands". But there's this interesting passage in the book about some internet research Aurora is doing on prosthetics:
"This article is about soldiers wounded in Iraq," he says. "It focuses on this one double-arm amputee who uses what they call traditional metal hook prosthetics. It says he was told the myo-electric--battery-operated--hands would be the best thing for him. But he was disappointed. He says--get this!--that what the article refers to as 'World War II-era technology' is better, easier: they don't fall off his arm like the other kind is prone to do, and the hooks are more supple and reliable"
The passage goes on to say that some opt for the realistic hands for a cosmetic reason, although the hooks have better versatility and are more intuitive to use. So, neat. It made me appreciate Lucius better, knowing he wasn't just choosing hooks so he could externalize any self-hatred.
Crazy Beautiful is available now in hardcover. But I'd like to make my copy available in a book giveaway. Leave your name and e-mail address, even a comment and consider yourself in the draw. I'll call on the randomly chosen winner in two weeks from this date!
Mandy
Review and Giveaway for *Perfect Chemistry* by Simone Elkeles
Posted by Words Worth Blogs! at 9:22 AM

Wahoo! I want in.

Great review by the way :)

i really want this book 2, ur awesome 4 hosting the giveway!!!

Again, such great books! I love fairy tale retellings, and Beauty and the Beast is definitely my favorite, mostly because they're love seems more realistic to me.
Please enter me, and thank you! :)

This book can't come from the library fast enough to suit me. I have this thing for re-tooled fairy tales, and it's kind of...obsessive. Must read all of them. :-) Thanks for a great review!

Fab review! I'm totally in for the giveaway, I definitely want to read this book. :)

wow, the concept is pretty intriguing... I think I'll add this to my wishlist just in case :)

thanks for the giveaway!

Ooh I would love to be entered!

count me in please

Please count me in :D This book is on my TBR list. I love the cover!

I would love to get a copy!

Bless you! A simple to enter contest! And for a book I'm dying to read, too! I'd like to be in the draw, please. :)
zombiegirrrl21 at aol dot com

Enter me in please!

Enter me in please!

Great review count me in!

I'd absoultely love to have a copy of this book!

I would love a chance to read this book!

I've heard so many great things about this book! I'd love to be entered for a chance to win! :)

I'm dying to read this book already!! I really hope I win, thanks!!:)

Please count me in! I've been dying to read this!

This Giveaway is now CLOSED!!

Thanks SO much for participating and totally check back for more giveaways in the future.

This book looks so sweet! Plus what an amazing cover! I am just a sucker for romances! Definitely count me in!
Email: tchschick@yahoo.com
-Sarah