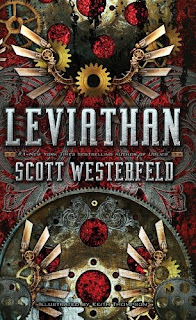 I'm pretty psyched about Scott Westerfeld's newest, Leviathan. It's out in October and has this steampunk, League of Extraordinary Gentlemen feel. Actually when I first saw it around I thought immediately of The Hungry City Chronicles by Philip Reeve. Mortal Engines, book one, is a total romp with darker philosophic and social commentary and some unlikely love interest.

But this trailer for Leviathan is gorgeous. There are illustrations throughout the book; Westerfeld's blog has some images and you can also read the first chapter of his book.

In an alternate 1914 Europe, fifteen-year-old Austrian Prince Alek, on the run from the Clanker Powers who are attempting to take over the globe using mechanical machinery, forms an uneasy alliance with Deryn who, disguised as a boy to join the British Air Service, is learning to fly genetically-engineered beasts.
Mandy
Posted by Words Worth Blogs! at 3:17 AM

Wow. Deep. The cover makes me think art deco. Not sure why either.

WOWOWOWOWOW! That trailer is awesome! I posted a Teaser Tuesday on this today and I HAD to add the trailer after I saw it here. Great find!

*hops from one foot to the other with excitement*

(maybe that should be the secret librarian/bookseller handshake?)

I am really looking forward to this. I've already ordered it.

Love love LOVE this new trend towards steampunk. Hope it lives up to its billing...

Juju: Yeah, totally art deco. I can see that. When was the art deco period? The book is set in 1914.

Becky: This trailer IS one of the more awesome ones I've seen!

Kiirstin: Ha, yes! But our faces have to be big and goofily smiling. Creepily eager and intense!

Celia: Me too. Suddenly steampunk is the coolest (which we all knew anyways!).