Are We Ever Too Old for *Choose Your Own Adventure* Books?

Okay *prepare yourself because I wasn't*. Random House has a line of books called The What If Books and they are Choose Your Own Adventure stories for older teens. I found a few of them at a used book store the other day and my immediate reaction was, "Psshh, What?". 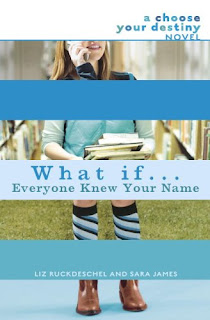 So I'm going to walk you through the first one in the series, What If...Everyone Knew Your Name, by Liz Ruckdeschel and Sara James. Haley Miller is your alter ego. She's fairly average; averagely smart, averagely dressed, with a potential to either be very cool or very nerdy. She's kind of a blank slate until you choose how she'll react to her first few weeks at a new school, Hillsdale High:

Every decision Haley faces, you get to make for her. You determine her fortune--her grades, her friends, her love life. With Haley's many positive traits, you'll have no trouble helping her achieve success...or will you?

Haley wakes up to her new life to her dog licking her face and her mom in the front seat of the car flipping through radio stations. They are on their way to their new house in the suburbs. They'd been driving from their old house in California and have just pulled up in their new driveway. MeHaley already has an eye for the boys next door:

These were grade-A East Coast hotties, shirtless, suntanned and sweaty, their rippling muscles flexing and firing each time they connected with the ball or the court.

She fixates on one guy in particular, Reese, and decides that she has a crush on him. The first chance to choose what MeHaley will do happens on page 16. Up to that point you've been introduced to her family, her new house (which has a window view into Reese's bedroom *gross*), and a convertible full of popular girls, lead by Coco, who has a past with Reese. The cards are lined up and then another voice, ala Gossip Girl, interjects and sums up MeHaley's position in bold:

Boy, does Haley ever have a lot to learn. She's about to be thrown to the wolves of the New Jersey public school system. And if she's not careful, they're going to tear her apart.

It goes on to say that MeHaley is cute for thinking that Reese would be taking the bus with her to school and that she better watch out for Coco. Then you have to make the first move. Either you call your dad's cell phone and demand that he drive you to school or you take the bus alone:

Okay, so although I don't think that there are any choices that will make me die a horrible death (which pretty much happened all the time in Choose Your Own Adventure books), I still think this one over. But I'll decide to phone my dad and get him to drop me off at school. So I'm on to page 27 *flipflipflip*.

When I get to page 27, MeHaley is already at school, we just assume that she's gotten a ride from her dad. MeHaley is assigned to Annie, who volunteered to show MH around on her first day. Their first class together is Spanish and MeHaley is pretty adept at speaking the language, well except when we're caught off guard by the smouldering hottie standing in the class doorway, the infamous Sebastian, Spanish exchange student.
The next opportunity to choose what you'll do comes quicker than before. You now have to decide if you'll join Coco and the popular girls to help boost their marks in Spanish for a group project or if you'll stick by Annie and her group, which includes sultry Sebastian.
This is a hard one. I think I'll go for the guy and keep my grade average up, missing the opportunity to get in with the popular girls. So I go to page 56 *flipflipflip*.

Okaay. So now Sebastian is hot and heavy with MeHaley and my next choice has come up (after three pages), which suggests that Sebastian's advances are lecherous even though the story never says what MeHaley thinks of Sebastian. I have this feeling, reading, that one author wrote a story and another came in and created a Choose Your Own out of it. It doesn't feel like it was originally intended. Anyway, I'm going to go to dinner at Sebastian's house with my original group, for some "authentic" Spanish food (because the guy never ate at McDonald's in Spain, he only eats "traditional" food). Anyway, I'm going for dinner on page 92 *flipflipflip*.

Hey I'm almost done the book! Ha! Okay I have to type this out:

"David!" Sebastian said when they arrived in the kitchen. He temporarily left the paella and lunged toward Dave.
"Um, hi," Dave said, jumping out of Sebastian's way. If Dave got jittery just standing next to a girl, there was no way he could handle a European man kiss.
"But this is how we greet our friends in my country," said Sebastian, scooping Dave up in an embrace and lifting him several inches off the ground.

Sebastian also has a vineyard. He's offering wine to everyone and I have to choose if I'll partake or not. And I do so I continue reading on. Annie gets wasted and has to sleep over at MeHaley's house to avoid going home and getting caught. I'm going to skip a few parts but I prefer Sebastian to Reese and Annie is getting on my nerves but apparently wherever Sebastian goes, Annie goes, so I'm stuck with her. *flipflip* Coco has adopted me and wants to pull a Pygmalion for the Hallowe'en party. *flip* I don't care about Whitney's personal problems and skip to getting ready for the party.

Huh, Coco humiliates me at the party when I show up as a pile of leaves, but Reese stands up for me even though he doesn't make a move. Although now there is Spencer, the charming preppy guy who has an interest in me. I think I'll be going to his illegal gambling party. And apparently I find the seedy underbelly of Hillsdale, where we smoke pot and gamble. I have to admit that I choose to go upstairs with Spencer rather than go looking for boy-next-door Reese.
Hahahaha! And it seals my fate! Spencer jumps on me and we're interrupted by the cops! Spencer is sent to boarding school in Geneva and I am stuck at Hillsdale for the rest of my life as "the random stoner girl Spencer was having sex with when he got busted by the cops, whose mom turned everyone in." Go back to Page 1 and try again!
Dude, I made some bad choices! Is it worse than dying a horrible death? I died a horrible social death.

Who can do better than me? Who wants a copy of this book to read, choose your actions, and blog about it? Let's see if someone else can avoid social death at Hillsdale.

Mandy
Posted by Words Worth Blogs! at 2:04 PM

Wow.
I had totally forgotten about choose your own adventure books, but this one looks AMAZING. I'm going to have to check these out!
Thanks for bringing them to my attention.

Choose my own ending?
SWEEEET!
I miss that.
How coooooool!

Brizmus & Juju: I Know! It was the funnest to read. And, you can read it over a few times to see what different fates lie before Haley. I love that I basically lost during my reading. I kinda knew that following the boys would get me in trouble. I can't help myself.

This is too funny! I'm wondering if any "bad choices" ever lead to a decent ending. Or if you can make a couple bad choices, then make one or two good ones right before the end so that you get to have fun but not a sucky life...

When I was younger, I always used to try to read EVERY SINGLE POSSIBLE SCENARIO in the Choose Your Own Adventure books, but I'd always lose track and give up.

Love it! I've seen these in stores and paged through them a couple of times, but I've never picked them. I used to always do one scenario and then start over again to do another.

If you would like to be interviewed on my blog: booksaremylove.blogspot.com please email me at princessashley9@gmail.com

I used to love the choose your own adventure books when I was a wee lassie.... thanks for reminding me!

Greetings to all in that mighty name of "Jesus":
Each Christian of whom know him in the power of His resurrection...or, maybe I should say...those who are well acquainted with the fact, that He truly did come back from the dead...also appeared to His disciples.

Thomas was invited by Jesus to feel the nail prints within His hands. So, those who also have been convinced by only having His spirit to convince them, having never had the opportunity to feel the nail prints in his hands, as did Thomas: Jesus said blessed are those who have seen and then believed, but greater are the blessings that rest upon those who have never seen, but still believe.

I am a full time writer and an ordained minister. I have written three books so far. My first book: Reviving the dead church, by reminiscing the day of Pentecost. The second one is: Beyond the Golden Sunset and by the Crystal Sea. My third book: Off to visit the Prophet Elijah, on this one, the contract to publish has been completed and soon the book will be published.
Warm regards

Billy: Hunh. Well I should probably e-mail that back to you...

I used to love the CYOA books! I'd always go back and try to get a better ending.

I'm up for the challenge :D

Hey Mandy! Wow, have never heard of books like this (guess that just shows my age? LOL) Will have to add this to my ever-growing list of books to read! But right now I'm on book 4 of the Uglies series, which I totally recommend...Ugh! I just realized I'm a Crumbly!!

Vixen: Awesome! You're up for the challenge. I'll send you an e-mail!

I was so excited to read your post since just last week I was telling my 9-year old daughter how much I loved the choose your own ending adventures. I am definitely going to get a copy of this for my library (a high school)

I'm sort of disappointed that this seemed just thrown together, because I LOVED Choose Your Own Adventure books when I was younger.