Just picking up stuff at random on our shelves at the store. Stuff I had NO idea was out there in the world, unread by me. 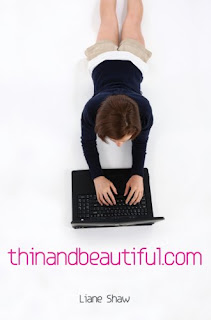 Thinandbeautiful.com, by Liane Shaw. I like the title of this book. And the cover. The back has the image of feet on a scale. But the feet have candy-coloured striped socks on, which doesn't really go with the topic of the book. The book's about a girl who is anorexic and addicted to a pro-anorexic website. Girls log-on to encourage each other to lose weight, like a support system. The group is called "Girls Without Shadows", which gives me the chills.
Then Maddie finds herself in a rehab facility and she's keeping a diary of her feelings. She's banned from her websites and angry with everyone--"Will a tragedy change her mind?"
The author, Liane Shaw, mentions in her author bio that she struggled with anorexia herself. And yes, the book's website IS http://www.thinandbeautiful.com/! It looks cool. I tried reading Laurie Halse Anderson's Winter Girls, but I think I was in the wrong mood for it. I definately want to go back and finish it. I truly loved Speak. 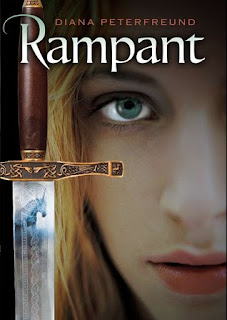 Rampant, by Diana Peterfreund. Okay, so I knew about this one before but hadn't seen a published copy yet. I am sold on the premise: "astrid had always scoffed at her eccentric mother's stories about killer unicorns". Awesome! On the cover there is a little unicorn reflected in the sword and knowing he's a killer makes the image very cool. Also, the author seems like a neat lady. She's had all these life experiences that I've only read about and is afraid of unicorns. Rampant looks really good and I've seen some great reviews of it on the other blogs.
I also had a look at The Maze Runner by James Dashner. The cover is really neat! It looks like a tall labyrinth covered in foliage with spikes shooting out and precarious ropes hanging about. It's about solving the problem of the Maze in order to get out. Ex cept the Maze looks to be unsolvable. It looks a little like The Hunger Games by Suzanne Collins. I was thinking of reading this one for Dystopian Teen Week but am not sure if it would fall within this category. Has anyone read it?
So that's what I've found while grazing on my shelves. What do you have on your shelves?

Mandy
Posted by Words Worth Blogs! at 4:32 PM

Rampant! I'm really thinking about getting that one... I haven't heard of the first one but now I've got to check it out! Lol, I shelf graze all the time but mostly at my local library ;)

Yes, I've read "The Maze Runner" and yes it would work for the dystopian challenge. It is pretty good, but I think the next two books will be better, whenever they come out.

I will not be reading Rampant because I HATE the idea of killer unicorns.
thinandbeautiful.com, however, sounds interesting, and I might check it out. I've seen some of those pro-ana groups, and they're scary!

Thanks for the feedback about these books. Especially The Maze Runner.

The Maze Runner keeps popping up. Maybe I should add that one to my list? Although I will admit (quietly, hoping no one notices) that dystopian lit is really not my thing.

I actually did do some shelf grazing myself last week, and picked up The Coyote Road: Trickster Tales, an anthology of shorts by some of my favourites and some authors I've been meaning to read.

I am SO sold on Rampant and Maze Runner too :)

The Maze Runner is AWESOME! I had a lot of fun with it, but I agree with an earlier comment that the next two will probably be even better. =) I definitely want to read Rampant, and not just because it has such a pretty cover, although that's part of it! Haven't heard of thinandbeautiful.com, but it sounds interesting!