Review of *The Giver* by Lois Lowry

Okay I have to pull myself away from internet research to find out why Lois Lowry wanted a photo of this man on the cover. Not why there's an old man on the cover--he looks like he could portray The Giver from the story--but why this man? Lois Lowry is credited with the photograph and I found out that Cliff Nielsen is the cover artist! To re-cap, Cliff 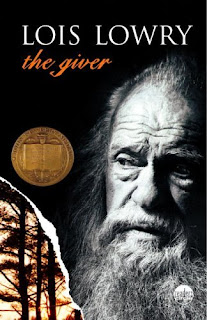 has created the cover art for Ice by Sarah Beth Durst and The Mortal Instruments Series by Cassandra Clare. But I wonder if Lois knew the man she photographed and why it's important for the cover of her book. It would be awesome if it was simply, "I thought he looked cool".

Although I don't love the cover, myself. It's actually put me off reading the book. I only took it up because I found the title on a list of dystopian themed books and I thought I'd give it a try. I was pleasantly surprised.

I really like The Giver. I'm still disturbed by the ending. It's a book that I can see myself reading again sometime just so I don't miss anything. Although I've seen alot of online reviews from people who have hated this book; I don't think it's for everyone. I love how strange it is--I took a lot out of this book, and simultaneously, nothing. I found it ultimately jarring.

An airplane accidentally flies over the town/compound(?) where Jonas lives and a voice from the public speaker system instructs everyone to stay inside their dwellings. The only other time a plane has been illegally seen by people is when a cargo plane lands to bring them their supplies. After a few minutes of confusion, the speaker announces that "Needless to say, he will be released", meaning the pilot. However you soon find out what it means exactly to "be released". 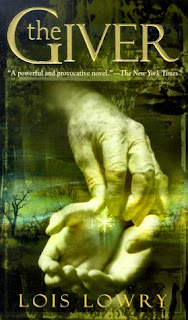 Up to half of the story in The Giver is setting the stage for a possible utopian future where pain and confusion have been eradicated, where families live together joined by empathy and consideration, and where all choices are made for you, eliminating the anxiety of possible regret or guilt. While I was reading I was thinking, "Hey some of these ideas aren't so bad". I even loved Jonas' father who is a caregiver for the government; he takes care of the babies produced by the birthmothers and makes sure they have a proper start before they are given to a family.

And then Jonas turns twelve and, like everyone else who turns twelve or has ever turned twelve in this community, he is assigned his career for life. And he is called upon to be the Receiver. Receiver of what? Jonas soon meets The Giver, the most important member of his society, and finds out the price of living in a utopia. 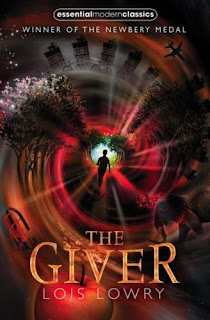 I really don't want to give too much away. I went in with no background info and loved finding out as I went along. Even the back cover synopsis of my edition keeps it wonderfully vague. I guess I wasn't surprised by how sophisticated the story is because of its awards and recognition, but I really enjoyed its depth. The Giver actually makes you see the necessity of pain in life and its absolute meaninglessness. And that ending...
The world in The Giver depicts more of a social dystopia or anti-utopia. There is no technology, no religion, and no Outside. I was also excited about its magic-realism elements (just the smallest dash) and the mythic manifestation of the human psyche. The Giver is a little hard to classify.
Mandy
Posted by Words Worth Blogs! at 5:52 AM

The Giver is one of my all-time favorite books, and every time I read it I get something new from it. So glad you liked it!

I adore this book. Great review. I love the different covers.

I loved The Giver. It was excellent and horrifying yet though provoking. And I agree that the cover is not the best.

I don't really remember much about this book, since it's been years since I read it. But I do remember thinking it was really good.

I love dystopian books so I'm very excited about teen dystopia week! I have never read The Giver and I've read so many positive reviews about it so I must go try and find a copy now. Looking forward to the rest of the week :)

I was another of those lucky people who went into this story completely blind. I think I read it my freshman year of college, just because it was sitting on a friend's shelf. And... WOW. I was not expecting this. It would be another 5 years before I even heard the word dystopian. But what an amazing book! I loved it, and cried (like I always do when reading about dystopias), and then I preached it to everyone in my immediate vicinity.
Great review!

This is one of my all-time favorites. My sixth grade teacher read it aloud back in 1996...(yikes, I'm dating myself), and it was the highlight of my day. I'm so glad that you weren't spoiled for it -- it's such a better book to discover as you go along.

this book was amazing! it took me a while to get into it, but once i did i loved it!

Awesome! People seem to really like The Giver. I can't believe I waited this long to read it.

I wish I could have done a more indepth review of the book as i thought it was near perfect. But I went in blindfolded and wanted to maintain that for the next reader. Sometimes reviews, well writing them, are frustrating!!

Thanks for your comments, all!

I'm so glad you did a review of The Giver. And I love that you showed the different covers as well.

I really enjoyed the Giver as well as the sequel. By the time I got to the third book it was too many right in a row. I enjoyed it, but not as much as the first two.

This was my favourite book as a child. I still remember the way it made me feel, and I think it forever changed the way I looked at the world.