Interview with *Jeanne DuPrau* Author of *The Ember Series*!

I was so impressed with The City of Ember when I read it last year. It's the first book in The Ember Series, and from page one I desperately needed to know its secrets. Here you have an entire city, somewhere!--you don't even have a handle on where the city is located--and which is swamped entirely in darkness. It's powered by electricity, candles and batteries are possible myths from the past, and the lights have just started flickering for the first time in remembered history. It is probable that they will go out completely. 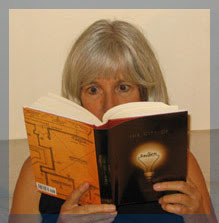 I raced along reading this book, feeling like if I read fast enough, got to the bottom of it, the lights wouldn't go out! The mystery of it all was so riveting. And so I just knew that if I was going to throw a dystopian party of any kind, Jeanne DuPrau was on the "A" list. She generously agreed to answer my frantic questions about The City of Ember.
***
Lina and Doon are only twelve in The City of Ember, the book that jump-starts the series, but they are the ones who see the limitations of living in the city. They aren't afraid of witnessing the flaws around them, the dimming lights, the dwindling supplies, and wonder what lies beyond.
Both have this innate heroism that most of the adults around them don't. What is it about the time when you are coming-of-age that makes it a powerful time for making social change? Especially in a crumbling dystopia like Ember? 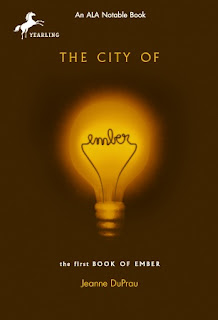 One reason is probably the lack of experience. That is, young people haven't experienced the repeated attempts and failures that most older people have; they don't pay much attention to people who say, Oh, we've tried that, it didn't work, it can't be done. Look at the Sixties, when a whole generation of young people was convinced that world peace could be achieved pretty much right away! Young people can be willing to try outrageous things that their jaded parents never would.
And I'd guess that another reason has to do with power of youth--a physical and mental energy that engenders optimism. We're strong, we're smart, we can do it! So they do.

The people of Ember are told that the pitch blackness of the Unknown Regions goes on forever, that there is nothing beyond Ember. In this way they are controlled by their fear and confusion. Can you tell me a little more about how a place like Ember sustains itself on the fear and confusion of its citizens?
Ember's resources are increasingly limited. There isn't enough for everyone. Everyone wants more, and those with the most power are in the best position to get more. So they want to hold onto their power, and a good way to do it is to make everyone else afraid--afraid to break the rules that keep them from exploring and experimenting, afraid to challenge their leaders for fear of being locked up or publicly humiliated. The Builders' initial decision to teach the Emberites that there was nothing beyond their city was benevolent: they wanted to keep people from finding their way to the dangerous world above. But as the years went on, this rule also became a handy way to keep people under control. People who are afraid--of the Unknown Regions, of the river in the Pipeworks, of fire--are less likely to try anything that would challenge the status quo, even if the status quo is about to kill them.

Everyone has a particular job to do in the city, but the people's fates have nothing to do with their interests or skill-sets. Jobs are given out purely by chance and when people are too young to know what they want. How important is this way of life to sustaining a city like Ember? I also love that Lina and Doon find a way around this societal rule in the book.
Quite a few of the necessary jobs in Ember are jobs that no one especially wants to do--trash sifter, rat catcher, Pipeworks laborer. The city government has solved this with the job lottery. The jobs assigned in the lottery, however, are only for three years. After that, workers might go where there's more need, or they might do what Lina and Doon did, and trade for jobs they like better. So there's a downside and an upside to giving out jobs this way. The downside is that some people have to do work they don't like, which is true in any society. The upside is not just that the work gets done, but also that young people get experience in how the city operates and find out what kind of work they like and don't like. Though I don't say this in the book, I imagine that as time goes on and it becomes clear to young people (and their employers) what kinds of work they're good at, people with the right skills will migrate into the right jobs. And no one will have to be a trash sifter forever, because new beginning workers will always be coming along.

The Mayor of Ember is a great character! He can be bumbling but he's also very scary as the highest authority in the city. What does the Mayor's character say about how life is dictated in Ember? The amount of power he has and how he uses it?
The mayor pretends to have the interests of the people at heart, but he doesn't. He has his own interests at heart. He makes pronouncements about how it's a crucial time and everyone's help is needed, and he and his guards enforce the rules that keep the people in line. But really, the mayor understands that Ember is on its last legs, and he wants is to keep himself going as long as he can. He is shortshighted, however. He collects material goods in his secret room, which he can
enjoy now, but he doesn't think about how little those things will help him if the city dies. If he were a wiser mayor, he would reward the efforts of the citizens to find a way out of Ember instead of punishing them. In The People of Sparks, readers will see how the mayor's greed determines his fate.

Ember is dank and dark and relies on stockpiled materials to maintain itself. Even in this type of dead environment, Doon naturally seeks out bugs and plants. He's fascinated by the bit of life that is found in the city. How important for you was it to show this evidence of unsupressed life in the story?
Very important! I think in a place like Ember, all people who had not been deadened themselves would be drawn to evidence of life. Doon's curiosity and Lina's wondering questions about the bean sprout are central to the story. They both know instinctively that life is a mystery and that the bugs and the plants are somehow clues to it. They both have the sense that something outside Ember must exist. Since people didn't make the bugs and plants, where could they have come from? I hoped readers would imagine what it would be like to live with almost no life around you except human beings--and then to come out into the natural world! Lots of people have written to me that the story gives them a new appreciation for things we take for granted,
like trees, and grass, and the sun.
Thank you so much, Jeanne!
Mandy
Posted by Words Worth Blogs! at 2:11 PM

Nice interview; great questions! I've read The City of Ember, but never really analyzed it this deeply. I'm surprised at all the thought that went into this book and all the innocent parallels to the current state of the world. Thanks! :)

Great interview! I read City of Ember and I really enjoyed it :)

I adored the first book, but sadly I haven't kept up with the rest of the series. The mystery was what propelled me through the story, and the ending very much made sense to me - I didn't really analyze all that was going on under the surface of the story until I saw the film version, which I thought was fantastic. Great interview!

Very in depth questions, I love it. Thank you for the great interview!

Thanks for the interview. I loved City of Ember and read it to my students. I enjoyed People of Sparks. Thanks for this.