Guest Blogger *Carrie Ryan* Author of *The Forest of Hands and Teeth*!

I am very excited to post a guest blogger piece written by Carrie Ryan! I was intrigued by the setting in The Forest of Hands and Teeth because it is such a mystery. I also wondered if Carrie thought of her book as dystopian and how the genre has ties with the post-apocalyptic theme. Below is her insightful response! 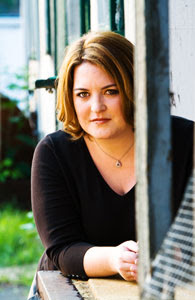 Right before I started writing The Forest of Hands and Teeth I’d just finished reading Life As We Knew it and How I Live Now, two books that deal with apocalyptic events (the moon shifting closer to Earth in the first and war in the second). What fascinated me most about these books is what it took the characters to survive and I wanted to read more books like that but had a hard time finding them.

So I decided to write the book I wanted to read and to explore what it took to really survive -- how would the world change and what would we forget if we were cut off from everyone else and cast them adrift for generations? I was already fascinated with zombies so it wasn’t a big step for me to decide that my apocalyptic event would be the zombie apocalypse :)

I spent a ton of time thinking about this world, building the rules and one of the things I realized is that with the world falling apart, there wouldn’t be any safe places left -- any enclave of survivors would get overrun with bandits eventually… unless no one knew they existed and they lived in a place no one would find them: in the middle of a forest full of zombies. I also realized that to make this work, the people inside the village couldn’t ever leave because if they did, the secret of their existence would get out. Hence the Sisterhood and their tight control over all information and aspect 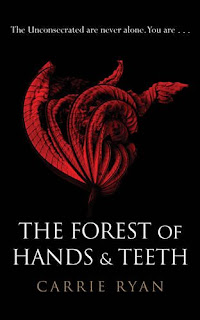 I also realized that I didn’t want this book to be about the apocalypse itself -- for my characters the Return (zombie apocalypse) is such a part of their everyday lives that they don’t question it. They don’t spend a lot of time wondering why and how it happened because to them, it doesn’t matter (the same way we don’t spend a lot of time wondering about historical events outside the context of history class - we just accept most things that define our lives such as the concept of freedom in ).

Of course, looking back on it, all of those decisions seem like they came to me easily, but they really didn’t -- a lot of it I figured out as I was writing the story. Really, I just started the book with a first line that popped into my head on the way home from work one night and wouldn’t let go.

Great post! Carrie answered a lot of the questions here that I had about the book but didn't necessarily get out of my reading of it. I appreciate that she describes the decision making process for her world-building, and what she was reading prior to writing it. Thanks for sharing!

The Forest of Hands and Teeth is next on my TBR list, and this guest post gave great insight into the world Carrie created. Thanks so much!

Thank you for a wonderful post! This definitely addressed some of the questions that I had about this book.

I've been wanting to read The Forest of Hands and Teeth for ages--I've heard such great stuff about it.

EXCELLENT guest post. I loved it, especially seeing the history and development of that world.

Thanks so much for inviting me to guest blog! I'm so happy that I was able to answer some of y'all's questions :)