An Interview With *Patrick Ness*, Author of The Knife of Never Letting Go!

I read The Knife of Never Letting Go before I started blogging. And it, along with Bernard Beckett's Genesis (stay tuned!), were just two of the reasons I wanted to start a book blog in the first place. Cuz what do you do when you've read a phenomenal book and want to talk about it? 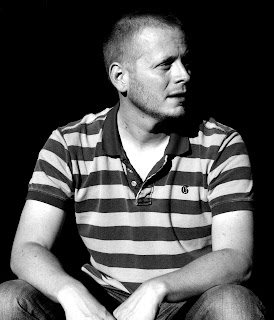 So when I started thinking about what to include in a Dystopian Teen Week, I instantly thought of The Knife of Never Letting Go! I had so many questions for Patrick, and he generously sat down and fired off some insightful responses.
It's funny: Reading some reviews of the first in Patrick's Chaos Walking trilogy, most reviewers refuse to give a lot of the premise away. And I completely agree. You need to read The Knife of Never Letting Go to believe it. There is so much juicy mystery involved, it's hard to speak about such a unique book. So I kind of wanted to amp up the mystery by asking questions that, when answered, would spark that need-to-know burn in someone who hasn't read the book yet. So be warned! You'll probably have to run out and get a copy of this book, and we're talking pronto!
***
Noise is only emitted by men in the world of your Chaos Walking Trilogy. Women can hear the Noise of men, but don’t emit it themselves. Beyond how the presence or absence of Noise works in the story plot-wise, what is the idea behind Noise and how it differs between the sexes? What does it mean that Noise se 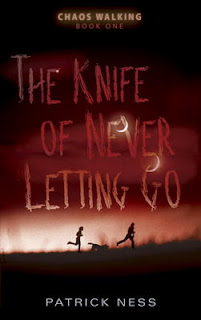 parates the sexes in the world you’ve created?
The idea was one from of my longstanding concerns, which is the seeming inability of our species to see difference as being merely difference. Something is either better (and therefore must be pulled down) or worse (and therefore must be exploited). Whole wars spring up from just the slightest difference in religion or ethnicity, and so I was thinking that the biggest obvious difference we have is men and women. So what would happen if that difference was made extreme? I think there'd be a variety of outcomes, and I explore a few in the book, from the absolutely terrible to the pragmatically workable. It's our greatest challenge, seriously, being able to accept difference and live with it peacefully.

I was also impressed by your handling of language in your books. You have some made-up words and phrases that sound so natural to their world. And the language of the Noise. How did you come up with it all? You have a remarkable ear for sound and the pleasures of language. I especially love that the Noise is “hand printed” within the text, as if it was scrawled. Was this your idea?
It was my idea, but it was a Walker Books designer called Patrick Insole who brought the Noise to life. And as for the made-up language, these things are practical on the one hand (how would a smart-but-illiterate hero portray the world?) and kind of mystical on the other. I just had to immerse myself in the world as much as I could and things just sort of come. I wish I could explain the writing process a little more than that, but if you could that, then it would be easy. It sure isn't. I suppose I just tried to push what I thought would happen on a planet that's had one language all to itself for a generation and how it might change. That kind of stuff is fun.

Todd is almost 12 when the story begins, almost a man. What is so unique about the time in a child’s life when they are coming-of-age, and why is it such a fascinating theme to write (and read!) about?
Well, it's where everything changes, isn't it? Not just physically, but emotionally, too, especially about the choices that make you independent. There are also unique challenges, because teenagers often have a lot of the responsibilities of adults without very many of the privileges and that tension is challenging and interesting (and difficult to live through!). It's really the main, important threshold of your life, where you're crossing over from one thing to another, and thresholds are always places where interesting stories happen. Life to death, like to love, crime to consequence, and on and on.

I love that you play with genre in The Knife of Never Letting Go. Right away I felt like I was reading a Western. Did you intend for Prentisstown to have a Western feel? Do you have a background interest in Westerns? What is the genre’s appeal?
I agree it's as much western as sci-fi! I don't have a particular background in either, but what I do insist on is that I can use anything from writing to tell the story I need. If I need sci-fi to tell it, I'll take as much as I need; if I need some western, then I'll do the same. Stories are more interesting if you mix it up anyway and don't just limit yourself to a single set of rules. Life isn't like that, so why should stories be? I'll happily go anywhere (and everywhere) a story takes me.

And do you categorize, if you could categorize your books at all, as dystopian? If so, what are the freedoms of writing in this genre? Are there any limitations? If not, what sets your books outside the categorization of dystopian fiction?

I wouldn't categorise them at all, seriously. I think the moment you start categorising yourself is the minute you start limiting yourself. The themes of Chaos Walking concern me, and they do recur in my writing, but I don't think consciously that I'm setting out to write a dystopian story. If I did that, I think I'd write a mediocre novel, truthfully. Because then you're concentrating on the "dystopian" and not the "story". And the story is the most important thing of all.
Thanks, Patrick!
Mandy
Posted by Words Worth Blogs! at 10:54 AM

I found the Noise and the consequences it had for men and women in various places one of the most interesting things about these books. I love both The Knife and The Ask, they're two of my favourite books I've read this year and I can't wait for Monsters of Men.

I agree with Ness about genres not being particularly useful to authors. (But they are very handy for marketing departments I'm sure, and bloggers!)

Fantastic interview Many and Mr Ness!

I'll echo Rhiannon here - fantastic interview! Those questions really do shed light on some of the fundamental issues in the novel. Great work, Mandy, and thanks for stopping by, Mr. Ness!
I'm giving myself a short break from 'Chaos Walking,' but I'm sure The Ask and the Answer will draw me back soon enough!

Rhiannon: Me too. The Noise theme really piqued my attention initially. What a cool idea. And I love that it's written out in hand within the story. It's kind of perfect.
And I agree: questions of genre are unhelpful for someone who's writing a book. Categories are easily torn down, in general. Also you don't want to box yourself in.

Celi.a: Me too! I haven't read The Ask yet. I have my little copy sitting on my shelf. But I will be getting to it very soon.

This is a great interview! I usually don't read author interviews; they are so not my thing. Patrick Ness, though, is someone whose head needs a little picking. I too have taken a short break from Chaos walking, but now I'm itching to read The Ask and the Answer!