Review of *Salt* by Maurice Gee

How wasn't I aware of Salt by Maurice Gee? It's the first installment in one of the darkest books I've read in a while. Seriously, Salt is dark and desperate. It doesn't let up and I'm afraid of what I'll be getting into by reading the other books in the trilogy. Maurice Gee is a pretty prolific writer, but I haven't heard of him before. He's a New Zealand writer and he's won a ton of awards and accolades. 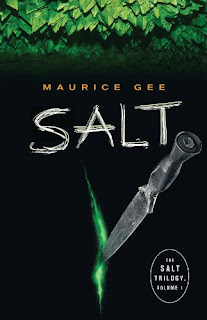 Salt has a strange setting; I can't describe it. It is dystopian--ruined and dying. Company rules with an iron fist. Although, when they came from over the sea their flags showed open hands, as if in greeting and peace. The rich live lavish lives and the poor die of starvation or illness. Many are hauled away every day to work in the various mines and other manual labour jobs where not much of you is left at the end of the day. The worst place to be is the salt mines, and to be assigned to Deep Salt is a death sentence. A slow and painful death sentence.
When the book opens, Hari is hiding in a cart, watching while his father is one of the many men being taken to a labour mine. Tarl fights back, insults Company and is marked to work in Deep Salt. Hari, using his ability to speak with animals, causes a diversion with the horses in an attempt to save his father. He fails, Tarl is taken away, and Hari escapes, vowing that he will save Tarl from Deep Salt whatever the cost.
Then we're introduced to Pearl, who is given to Ottmar of Salt to marry. He's a cruel feudal Lord and Pearl and her maindservant, Tealeaf, have made plans to run away. For Pearl, the plan to run away is simply to get away from a situation she hates the idea of. But Tealeaf has her own motives and she turns out to be a different character entirely. One of the coolest things is that you don't get a physical description of Tealeaf and I just pictured her as an older, wizened woman. When she and Pearl escape Tealeaf treats her like an equal now t 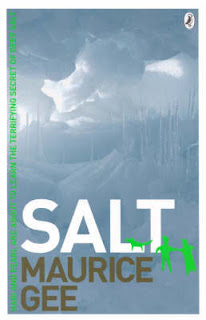 hat they're on the run together; she wants Pearl to be able to take care of herself. You get the feeling that Tealeaf never thought of herself as a servant to begin with. And the plot confirms this. What is the most mysterious part about her character, though, is her final physical description that left me really needing to know more about the world in Salt and how T's alien features came about. Maddeningly, I love when speculative fiction suggests a setting and refuses to explain. The world in Salt is just how it is, but it's left for the reader to experience as they go along. I can tell that in the next two books you'll get a few more pieces of the puzzle.
An amazing part in the book was when Hari and Pearl finally make it to Deep Salt. Most of the book has been a "road movie", where the characters get to know and trust each other and their mettle is tested by sudden action after long periods of just walking. You have no idea what is inside Deep Salt, a cavernous--well cavern--where men go in, work to the bone and never come out. There is rumour that any number of different beasties could be living there, eating the men, but you truly find out when Hari goes in search of his father. Chilling! 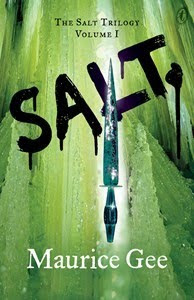 I also found three different covers for Salt. The top pic is the version I have. I really like the cover; the green and black is striking. I love Salt spelled out in "chalk". At the top I originally thought the green spikes were leaves. But then I realized that they are mineral deposit growths of some kind. They look like stalactites in a cave. And the green makes me think of radioactivity. This stalactite look is used for the other two covers I found, too. Which is neat; I don't think there was any creative connection between the designers of each cover.
But as for the story, know that it's a pretty dark tale and doesn't ever really let up. I took a little break halfway through and read something else because I felt it was a little suffocating. There is light in Salt, but very little of it. I felt like I had to dig to find it. But, ultimately it's worth the read because of the Great Reveal of the plot, the unique setting, and the exciting ideas explored on speculative questions like how does history play itself out? Do time periods repeat themselves? Will we ever have an answer to poverty? Some very interesting cerebral terrain is explored in Salt.
Mandy
It's sequel is Gool. Available soon in North America. The first chapter is printed at the back of Salt. I refrained from reading it because I think I'll just wait for Gool to release. Let me see if I can get a date...hmm, no date set for the North American version. Salt just came out via Orca in October, so it might be awhile for Gool. It looks cool, though, a bit of a stand-alone story. Characters from Salt are referenced but the main characters are new. Salt ended in a way that is satisfying as its own story.
Posted by Words Worth Blogs! at 4:11 PM

*perks up* Dystopian? How do I not know this book? Adding to wishlist!

This sounds really good. And I have never heard of it. Definitely going on my TBR list.

I feel like Rhiannon's lesser twin...I'm always wanting to chime in with the exact same comments... :) That's probably a good thing for me, actually. I'll have to check this one out!

I gotta gotta read this. Thanks for finding the alternate covers :)

Cool Mandy! Just when I think I'm getting caught up on all the cool reads you tell us about...now I have yet another awesome book to add to my ever-growing list. Thanks for the great reviews and interviews!!

Rhiannon: I Know! I only found out about it because Orca is a Canadian Teen publisher and they've taken on the NA rights to the book. Otherwise, I wouldn't have heard of it!

Kate: Let me know if you ever read it (if you think of it!). I'd love to know what you think.

Celi.a: Ha! However I'm glad you leave comments because I love to read them.

Juju: I love that you appreciate the cover images. I am really affected by the packaging of books. And I love to see different interpretations of covers. It's just neat.

Marge: You're a pretty prolific reader yourself! I've seen your goodreads.com page! I think you'd like this one.

Hi all,
I work for Orca, the North American publisher of Salt. I'm so glad that you enjoyed reading it! It's true that you might have to wait for Gool for a little while... we will be publishing it in Fall 2010, with the third book (title still undecided) coming in Spring 2011.
Also thrilled that you liked our cover. The knife is actually a real weapon that we purchased from a specialty knife shop in the Czech Republic. We photographed it slicing into some cloth to get the image.
Happy reading!