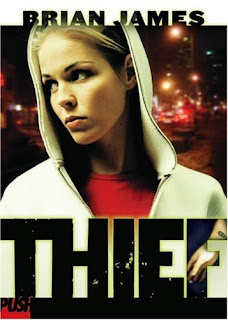 Push is an imprint of Scholastic and they have a great handle on gritty realism in fiction...Oh, and Push publishes first-time authors in particular and David Levithan is its founder, which is a neat fact. I haven't read anything by him yet, but his name keeps cropping up. He's co-written a book with John Green called Will Grayson, Will Grayson. It's coming out in April and I can't wait to read it. The Push imprint is author-centered, which is great to see.

I just read another book by Brian James called The Heights a few weeks ago. It's his newer title and I really enjoyed it. Brian really knows how to write female characters--although just because I am female I don't have the authority to dictate how all female characters should be written in fiction. He's just good at it. He evokes a compelling inner life. I feel like I personally know his characters.

Elizabeth, "Kid", is living in a foster home with Alexi and their foster mother Sandra, who acts more like a handler than any type of mother. Sandra has Liz and Alexi pickpocket in exchange for room and board. The girls are "homeschooled" and have matching masked tattoos to show that they are thieves. On the cover the girl has an actual mask tattoo and it looks okay, but I really imagined the tattoo as looking more like an infinity symbol with strings hanging off each side. Both the mask image and the inifnity image make sense for Liz's character. I wonder if Brian had a particular image in mind when he wrote this detail into the book and if the cover depicts it accurately. It's funny, the girl on the cover is cute and I thought, starting the book, "yeah, okay, some cute girl is the thief...or they needed an attractive cover girl". But Liz is described as a good thief exactly because she is cute and never questioned. People don't believe she's up to something and she gets away with everything.

Then their household is sent a brother. I couldn't quite get a handle on why Dune, who's like 16, is sent into foster care. But he and Liz have an immediate connection and she helps him become a thief. Apparently boys are bad at stealing because they are automatically suspect. Whereas a cute girl can get away with anything. Sandra doesn't want Dune there upsetting her balance, so she just waits for him to get picked up by the cops. Sandra always says that if you get caught she won't come for you.

One of the strengths of the story is Liz's pull between Alexi and Dune. I think there is a romantic relation ship between L and A, and L certainly looks to A for comfort. But Dune feels like the beginning of a family to her; he offers something even softer than Alexi does. But A doesn't let go as easily as Liz needs her to and the three of them struggle to figure out their own lives and where each of them fits within it.

And like The Heights, Thief is poetic; at times very beautiful. Here's a passage I like:
I wouldn't ever let him see if it wasn't there in his eyes...the spark of a shooting star deep under the surface like a ship still burning on the bottom of the sea. I can tell he tries to hide it as much as I try to hide my smile...
And there's a companion scene a little earlier, a flashback of Liz and her mom:
"The water calms you like it calms all animals," she tells me.
Only she's wrong about that. There's nothing calm about me when I'm near the river. It feels alive inside me.
My mother used to let me throw wishes into the river. I'd scribble them on tiny pieces of paper and cry as I watched them float away. She'd put her head near my ear...whisper softly...tell me how the seagulls would keep my wishes from dorwning...carry them off to the end of the world. One day all the wishes would come back to me on shooting stars.
I really like the image of the ship burning under the sea, it totally captures the sense of Dune and his uniqueness. And subtly connecting his new presence with the shooting star memory is great because you get a feeling for how Dune has affected Liz.
I also like the ending, and usually I don't talk about the endings in books in my reviews. But this one was poetic and it doesn't ruin the book to say that Liz realizes how real love can be strong and secure, versus the slippery love that she's experienced up to this point. It's conveyed very well.
Brian is also the author of Zombie Blondes which seems like a bit of a departure? I have it on my reading list for the near future.
Mandy
Posted by Words Worth Blogs! at 6:34 PM

Mandy, this looks good. And you MUST read Nick and Norah by Rachel Cohn and David Levithan. It's my favourite contemporary YA from the last few years.

This looks excellent. And I love that the author has something so different coming out -- it's so interesting to read a real variety of novels from an author. (Libba Bray is a perfect example.)

I'll be meeting David Levithan this weekend (he's in Philadelphia for a conference and book signing), and though I've yet to read any of his books, they're at the top of my list!

Great review. I like what you said about the burning ship too. Very well said.

Clare: I'll put it on my list! I've seen it around of course, but haven't picked it up yet! Thanks.

Donna: Totally! Especially the Libba Bray part! So different. I'm interested in Brian's Zombie Blondes book. I wonder how it will differ from the two I've read.

Juju: Thanks for your blush-inducing comment. I always look forward to your visits and comments :)