Review of *The Maze Runner* by James Dashner

I'm trying to think about how I'll begin this review, but I can only think of saying "I loved it like whoa!". Which is kind of helpful and unhelpful at the same time. But I can say for sure that The Maze Runner has pitched itself fitfully into a top five placing as my favourite fiction of all time. This book is so good. 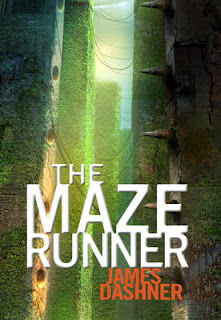 And I hummed and hawed during the first 50 pages or so, thinking "this book can go either way in my esteem". And then something happened and I was reading this book faster than I was processing the words. I craved the story when I wasn't reading and burned to know what the heck was going on.

Thomas wakes up in a pitch black metal box which begins moving upwards. He knows somehow that he's forgotten everything about his life except his name. Then the box opens, he realizes he's been in an elevator-type place and a bunch of faces are peering down at him from above. He's hoisted out to meet the Gladers; boys, only boys, who have been living in The Glade for two years. None know their pasts or how they got there, or even what is beyond the world they're trapped in. Do you remember the movie The Cube? It's what The Maze Runner reminded me of at first; strangers wake up to find themselves trapped in a labyrinth that shifts and moves, trapping them and testing them. Except The Maze Runner also has particularly horrible beasties running around. The boys are safe as long as they stay in The Glade and have even managed to set up a system of governing and a decent day-to-day lifestyle. But every night they send out a team of Maze Runners who try to out-pace and out-smart the maze. No one has solved the problem after two years and then one day the Gladers receive a note, and a girl, and everything changes.

There is so much mystery in this book that I was actually frightened of how it would end. Would the ending be satisfying? It's also the first of a trilogy. And I have to say that not only does The Maze Runner end in a satisfying way for its own contained story, it also makes you desperate for the sequel. As a lady familiar to reading sequels, trilogies and series, I can say that this is very hard to do. The drive to know the answers is very strong. And I have no idea when the second book is available...Ah, Fall 2010 (from James' Blog). He also mentions that he didn't just pull the sequels out of the air, but had them planned all along as an on-going larger story arc, but also as stand-alones. The second book will be called The Scorch Trials. I really appreciate and love when I feel I can trust an author; there is a LOT of mystery in The Maze Runner but I have faith that all will be revealed and it will make sense to the story.

I also love that TMR does a few genre-defying tricks. One scene in particular; Thomas is in the maze, at night, explicitly a really bad time to be trapped outside The Glade, and he's been spotted. *shivers* So scary. The tension was beautifully crafted, and I still have this very vivid sense of the action. I think SciFi can segue neatly into Horror pretty easily, but this scene was a great example of this potential--total spookstown.

I think also that the designer did a pretty good job on the cover art. If I was left to my own imaginative devices I probably would have just been picturing David Bowie's Labyrinth and it wouldn't have been so scary. Although, reading TMR, I felt like the maze might look a little less green and a little more robotic? The hanging vine/ropes are there in the story but I don't remember wall-spikes. I also had a problem trying to picture The Glade; it looked smaller in my mind than it was described in the book. I was like, "Oh, there are gardens and a forest? *push the edges of my mind's map back significantly*".

I want to shout out an extreme thank you to Random House for making this giveaway possible!
Posted by Words Worth Blogs! at 9:29 AM

Thanks for the chance to enter!

Here are my bonus entries:

Put it in my sidebar on my blog, http://CalicoCritic.blogspot.com

When is the deadline for entries? I'd like to include that date in my sidebar mention on my blog.

Please enter me in your giveaway.
zenfoxflowerATyahooDOTcom
Elie (Ellz Readz)

I really, really want to read this book.

This sounds like an amazing read! I'd love to win.

Oh, I would love to read this book. I have heard so many good things about it!

would love a chance to enter!

Great contest! Thanks for making the entry easy-peasy for all and offering such a great (or so I've heard) book! Count me in!

I would love to read this book.

The Cube! I do remember watching that film. Kinda liked it.

I tweeted this contest (If you're on twitter I'm @rhiannonlhart)

(By the way I'm in Australia so I hope I'm still eligible.)

I would love a copy I found your giveaway through a tweet from J. Kaye.
Layersofthought(at)gmail(dot)com

I was wondering when your contest ends and who is eligible - US/Canada/UK/Worldwide?

Would LOVE a copy!

X2 my sister's son would love a copy of this book as well so she should be stopping by at some point since I told her! ;o)

This book looks amazing.
Everything about it screams "Read Me! Read Me!" and boy do I want to:)

I would love to have this book. Reviews have been great and you seem pretty excited about yourself so it must be good.

Leslie @ This is the Refrain said...

Thanks for the contest!

OMG! I've heard so much about this book and would love to win it!

Thanks for the giveaway :)

I really want to read this one! Great review.

Thanks for the giveaway! I really want to read this!

I'd love to be entered!

Linked to sidebar of blog!

Also tweeted about it! x2

Awesome review! I actually wasn't too into reading this one, but you make it sound awesome. And double thanks for the contest! :)

Thank you for this awesome review! I'm so glad you liked it!!!

Glad you liked it, I can't wait to read it!

Enter me, please. I've been seeing a bunch of great reviews.

Please enter me! I would love to win this book :D

x2 [sidebar link on my bloggie]

Just found this giveaway and blog from J. Kaye on Facebook! I'm now a follower and would love a chance to win this book. thanks!
dcf_beth at verizon dot net.

Just found this giveaway and blog from J. Kaye on Facebook! I'm now a follower and would love a chance to win this book. thanks!
dcf_beth at verizon dot net.

Wow. After this review, I HAVE to read this book!

choco (In Which a Girl Reads)
chocowrites[at]gmail[dot]com

X2 (added to sidebar at http://inwhichagirl.blogspot.com/)

I've been eyeing this book for a while now! Fingers crossed!

Put my name in for this one - it sounds and look fabulous! Thanks!

Enter me!
It's in my sidebar http://brizmusblogsbooks.blogspot.com , and I tweeted it http://twitter.com/brizmus

oh, and when's it ending? I put it for November 18 just because I like the number 18, and I didn't know.
This book really looks rad!

Ohh, great review! I cannot wait to read this book! I've heard such awesome things about it, please enter me if this is open internationally :)

This contest will be featured in the Weblog Love on Wednesdays post scheduled for 11/11/09.
http://literaturecrazy.blogspot.com/2009/11/weblog-love-on-wednesdays_11.html

omg
omg
omg
I would love to win this.
Please please enter me :)

M! guees, a lot of people trying to get this book!! i remember you told me about it! well trying my luck again! :-P
the dystopia week is looking beautiful!!! great books and better reviews! and interviews :-)
thanks M!

Please enter me for the book

Please enter me to win

This sounds awesome! I'd love to win a copy!

I love dystopian books and I'm sure this one would be wonderful too! I would love to win:) Thanks a lot!

i also linked this contest on my blogs sidebar: http://goodgollymisshollybooks.blogspot.com/

OMG! I really want to read this! Enter me please!

I want to read this book so bad!

Posted about it here: http://www.contestsaroundtheblogginguniverse.blogspot.com

Would love to read this book

Please enter me! I've been dying to read this book.

Thanks for the chance to win! My email is:

Ooh, great review! Got me interested in sci-fi and that's not very easy to do :P

x2 for sidebar on my blog
http://agoodaddiction.blogspot.com/

I'd love to be entered!

This books looks so amazing and I can't wait to read it!

Please, count me in, I've heard great things about it!
I posted the contest in my sidebar. Thanks for the great contest!
ivanaquick at gmail dot com

This looks so wonderful! Please include me in this giveaway... I have twittered about it!

I would love to read this book...please enter me!

x2 And I blogged about the contest here.

Please count me in. Thanks for the giveaway.

This sounds like an absolutely awesome book! Please enter me.

+1 Posted about this contest with a link on my sidebar at
http://gimmethatbookbeforeipunchyou.blogspot.com/

oh, thanks so much for the review. It looks wonderful. Please enter me for the contest.

I have not read James Dashner's new book but I would really like too.

My husband would love this book!
lraphaelbogaert at yahoo DOT com

I'd love to be entered1 Thank you.

And I tweeted here

Please enter me!
added to my sidebar: http://meghansbookblog.blogspot.com
Thanks. =)
mdondero@sprynet.com

Please enter me, Darlene
wrig9945@charter.net
Thanks

Would love to win!
amy
addictedtobooks1993@yahoo.com

Please count me in!

Ah! This book looks so good and my library doesn't have it! I'd love to be entered!

I posted the link to my sidebar at
jessloovesagoodstory.blogspot.com

I'd love to be entered for the contest

Please enter me into this contest! Thanks for the opportunity.

please enter me in this contest if its open internationally

Please enter me this sounds great!!

please enter me ive heard great reviews for this book.

Cool contest. It would be amazing if I won this because I FINALLY turn 18 on Nov. 18!
- Cardwellmail@aol.com

I'm so bored! I seriously need a book as such! Thank you so much for organizing this contest, at least it makes me looking forword to tomorrow even though I won't be getting that book.
X2 via blog at bookaholicgeek.blogsot.com and informing my friend who is also a bookaholic.

I want to read this book so bad! Thanks for hosting this contest :)